What's New On Damen? Oh, Nothing, Just A MAN OF STEEL ON A SWING

LINCOLN SQUARE — It takes a lot to stop Chicagoans in their tracks.

A bright red man of steel on a giant swing in the middle of the sidewalk? Yeah, that'll do the trick.

"Swinging II" showed up May 10 on the 4800 block of North Damen Avenue as part of the Chicago Sculpture Exhibit, which aims to bring art to people rather than dragging people to art. 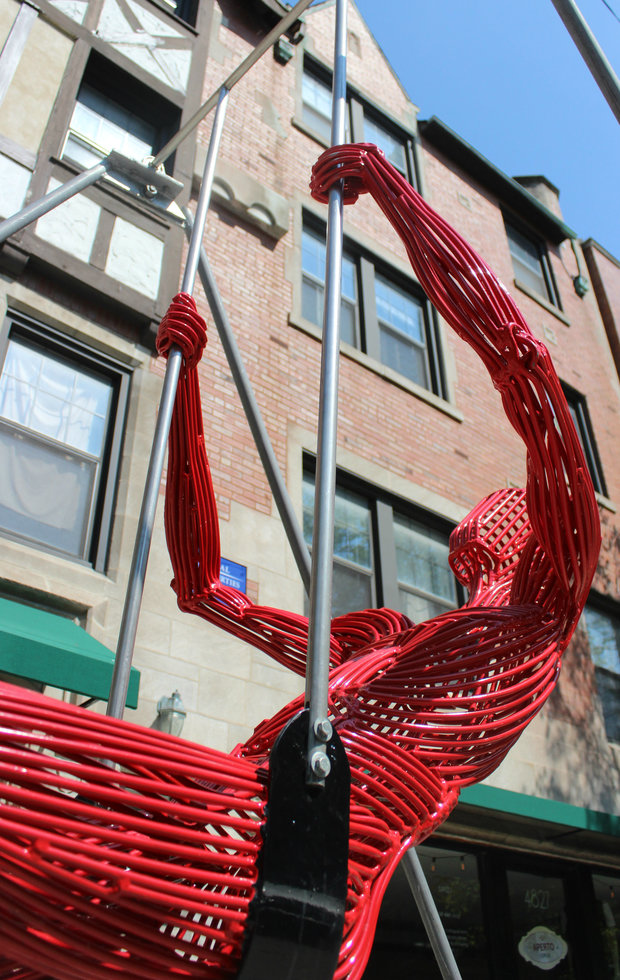 "Swinging II" will be on display for a year. [All photos by DNAinfo/Patty Wetli]

Instead of museums' usual "do not touch" approach, folks are encouraged to get hands-on with the Red Man — permission granted from "Swinging II"'s creator Jack Howard-Potter.

"The sculpture is fully kinetic," Howard-Potter said. "If you give it a push, it really awakens the piece."

His only caveat is carved into the sculpture's base: "Stand clear."

"The thing is hundreds of pounds of steel ... don't mess with this thing," said Howard-Potter, who incorporated a guard bar into the sculpture to protect people from their own worst "Darwin Award" instincts.

"Swinging II" is one of more than 40 sculptures, many of which are still being installed, that will be placed around the city, including more than a half-dozen in the 47th Ward, according to Barbara Guttman, the exhibit's director.

"Art should be everywhere," Guttman said. "We're bringing it out into neighborhoods, not keeping it all downtown."

The Ravenswood Chamber of Commerce is sponsoring "Swinging II," as well as a sculpture in front of the Black Ensemble Theater on Clark Street.

"It changes the routine and gets people to notice what's around them," said Megan Bunimovich, the chamber's executive director.

"Throwing it in with your walk to the bus or the grocery store or the dry cleaners, it stops your train of thought," she said. "It brings your focus up." 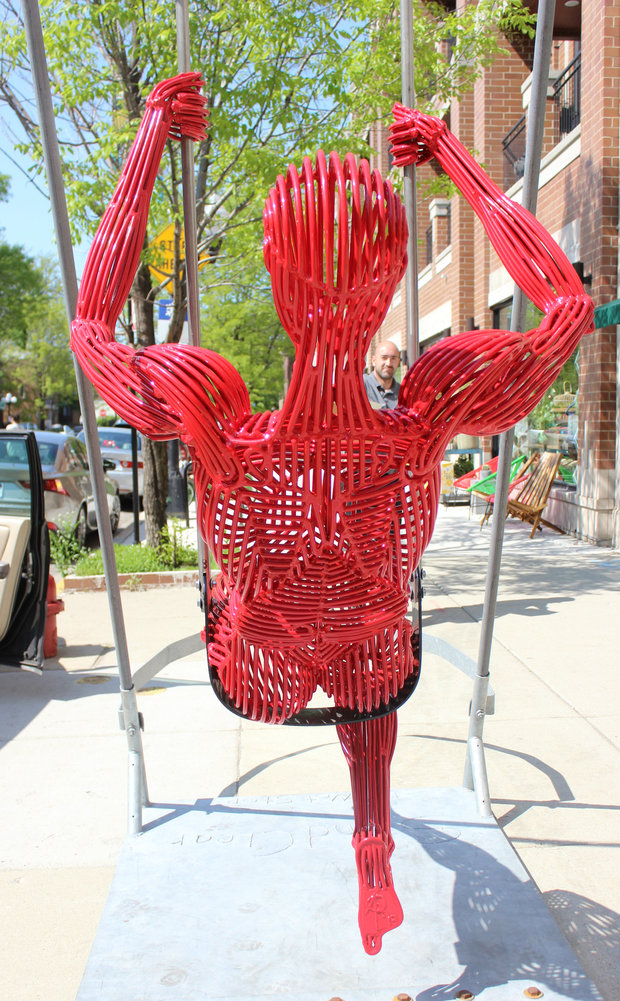 It's OK to give "Swinging II" a push.

For Howard-Potter, the beauty of public art is that while it initially surprises people in a "what the heck?!" kind of way, the sculpture will eventually become "part of the fabric of everyday life, so [people] end up getting used to it and enjoy seeing it," he said.

A native of New York City, Howard-Potter became a fan of street art as a youngster and has spent the better part of 20 years perfecting his unique style.

Like "Swinging II," the majority of his figures are captured mid-motion, in poses he describes as "halfway between going up and going down."

That Howard-Potter uses steel as the medium to capture this movement and fluidity is part of what makes his work so beguiling.

Worth noting: Howard-Potter bends the cold metal rods by hand (who's the Man of Steel, now?).

"Steel actually has this elastic life," he said.

Each of his sculptures is made from dozens of 5/8-inch rods, cut, shaped and welded one at a time by Howard-Potter, who honed his technique under the tutelage of a blacksmith.

The rods are placed on a worktable studded with pins; by pushing and pulling the metal against these pins, Howard-Potter gradually creates curves in the steel.

"I don't bend it all in one time," he said of the laborious process (so, not Superman after all). "It's a series of many, many little bends." 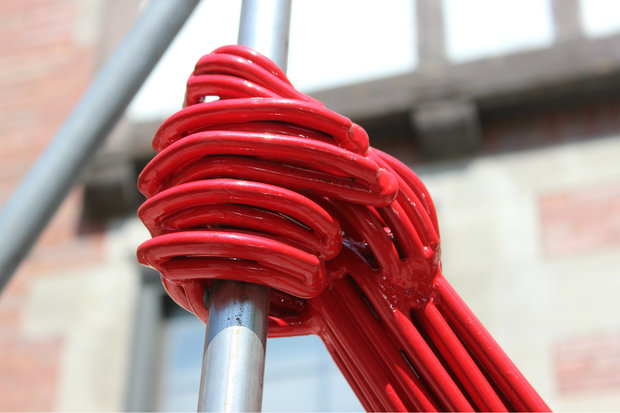 The steel rods are bent by hand by sculptor Jack Howard-Potter.

The sinewy appearance of Howard-Potter's sculptures — "Swinging II" has discernible biceps and glutes — is another hallmark of his work, gained from an intensive practice of figure drawing.

"Swinging II" is as much a feat of engineering as art, something Howard-Potter hadn't anticipated when he first conceived the piece.

The Red Man owes his floating appearance to the swing's incredibly strong and supportive design. His pose — one leg bent at the knee, the other extended — was also devised "to center the gravity," Howard-Potter said.

None of this is particularly evident to the average passer-by, which is fine by Howard-Potter.

"Sculpture has its own life and power," independent of its maker, he said.

If "Swinging II" brightens the landscape and causes someone to shift their gaze, if only for a second, it will have achieved the artist's goal.

"The whole point of me making these things is having people look at them," Howard-Potter said.

And maybe giving them a push.

Pieces included in the Chicago Sculpture Exhibit will be on display for a year. Look for several more to pop up in the neighborhood in the coming weeks, including 1770 W. Berteau Ave. Resident Belinda Shastal coaxed a number of area businesses to sponsor statues along the Ravenswood corridor.

Howard-Potter has a second piece included in the show, located at Halsted and Monroe. 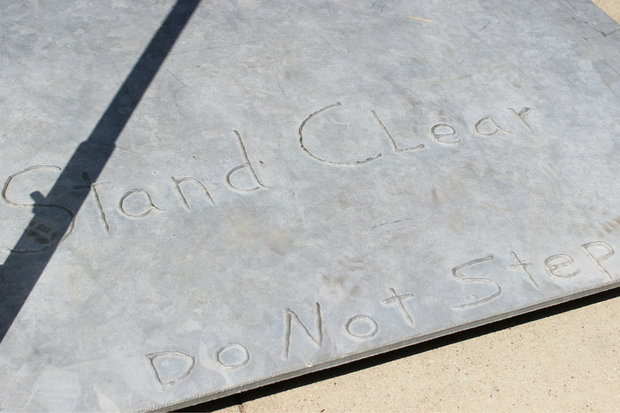 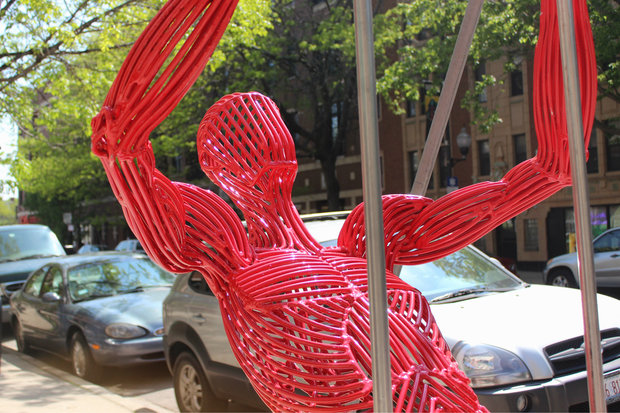 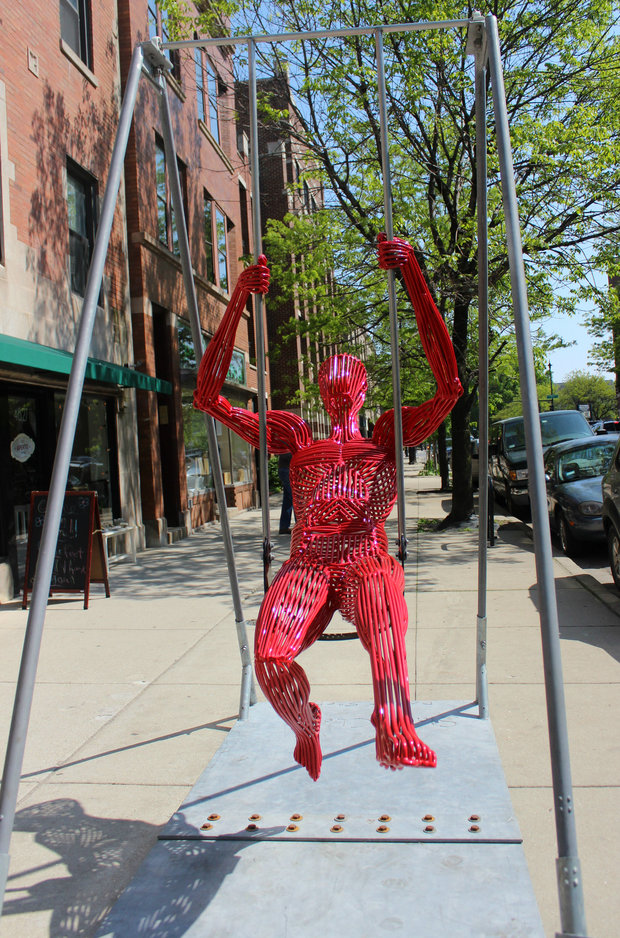 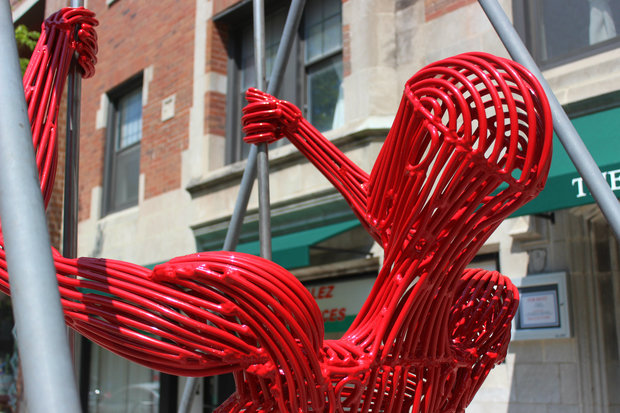