LINCOLN SQUARE — "Reach for the stars" may be the tritest of cliches aimed at teenagers, but a group of Amundsen High School students are taking the saying literally in a bid to improve the night skies over Chicago.

As one of 20 teams participating in the Aspen Challenge Chicago, which kicked off in March and culminates Wednesday at Soldier Field, Amundsen students are tackling the issue of light pollution.

Their project, dubbed Starry Chicago, makes the case that excessive illumination does more harm than good.

"Kids don't understand the sky should be full of stars," said Amy Exposito, one of eight members on Amundsen's team.

The problem, teammate Juan Chavira explained, is that most lights emit rays in all directions, creating an effect called "sky glow," which obscures stars.

The reason most often cited for bright lighting in urban environments is that it promotes safety.

Not so, students said.

Research by the International Dark-Sky Association shows that glare can actually make it more difficult to spot criminals, they said.

Shielded lights would still illuminate streets and sidewalks without creating sky glow — Chicagoans could have their streetlight and starlight, too.

New York has enacted laws requiring the shielding of most streetlights, noted Natalia Goral, the team's legal eagle, who helped craft an ordinance the students intend to present to the city's aldermen.

"Chicago is behind the curve," she said. "As a city, we should recognize these issues."

In a case of fortuitous timing, Chavira and teammate Justin Julian had an opportunity to meet with board members of the Chicago Infrastructure Trust on behalf of Starry Chicago.

The board is spearheading a city plan to upgrade more than 270,000 lights in Chicago, about 85 percent, with LEDs leading the list of replacement options (a proposal that's sparked a Change.org petition).

The team hopes its presentation made an impression on the board.

"Even though we're not adults, that doesn't mean we can't make a change," said student Shannon Suty.

With all of the issues facing Chicago, Suty said it's easy to be dismissive of the effects of light pollution.

"We are still a part of this earth — we should have more exposure to that," said Suty.

As part of their project, the Amundsen team hosted a "star party" for elementary school students, an event that proved enlightening in more ways than one as the teens witnessed how excited the youngsters were to catch their first glimpse of planets and other celestial bodies.

"When we did the star party, to be able to see the sky, it made me think about everything I've been missing," said Julian. "This is something everyone should have."

Children, and adults, in Chicago should be able to count more than a handful of stars in the night sky, the students said.

"It's almost a right for us to look up into the sky and see the things people have seen since the earth was created," Merino said. "There isn't a reason why we shouldn't be able to see stars."

The Aspen Challenge asks teens to "design solutions to some of the most critical issues humanity faces," according to the program's website.

In Chicago, teams were given a set of challenges to choose from, including designing the 21st Century library, expanding the availability of fresh and nutritious foods, and illuminating the unknown by creating a citizen science project.

Amundsen's team opted for "illuminating the unknown" and has been working non-stop on its project for the past seven weeks. 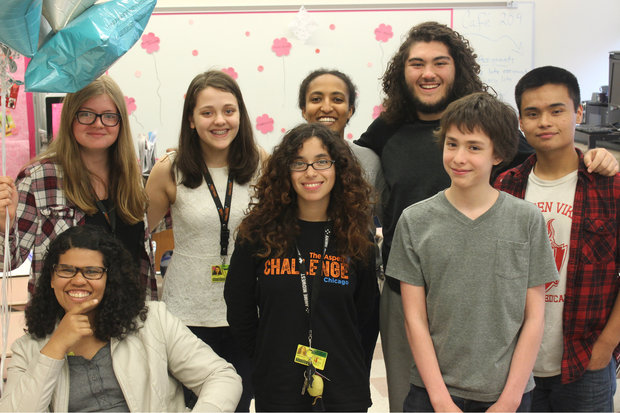 "They were here every day of spring break, they didn't have a spring break," said their faculty adviser Colleen Murray, who teaches world studies and history at Amundsen.

On Wednesday, the students will find out whether all that hard work paid off as they vie to become one of three teams chosen to present their project in late June at the Aspen Ideas Festival.

Win or lose, the teammates said they hope to continue the Starry Chicago program beyond the Aspen Challenge.

There's that ordinance they'd like to see passed by City Council, for starters, but their real end goal is even loftier.

Ask The Parking Ticket Geek: What if Meter Receipt Was Upside Down on Dash?