Brü Coffeeworks Is Bringing The Micro-Roasting Trend To Albany Park

ALBANY PARK — In the same way that anyone can make beer out of grain, hops, yeast and water, anyone can take a raw, green coffee bean and roast it brown.

The difference between an amateur and expert roaster? Practice and a healthy dose of obsession.

Cory Creighton has spent years perfecting his coffee-roasting technique: experimenting with minute alterations in heat and timing, making adjustments for moisture content, taking into account whether a bean was grown at altitude or sea level.

"What I've always been into is profiling," Creighton said. "I will roast so many variations and then choose what I think is best."

He even uses a refractometer to measure the concentration of coffee in his cold brew.

But it's that kind of attention to detail that separates Creighton's brown beans from other roasters' — a boast he's putting to the test with Brü Coffeeworks, opening this spring in Albany Park. 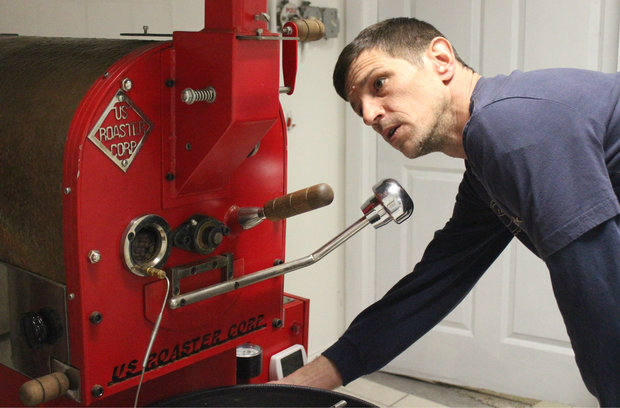 Operating out of a Lawrence Avenue storefront, Creighton's Brü (no relation to Brü Cafe in West Town) will join a growing club of micro-roasters — including Bow Truss, Dark Matter and Groundswell — who are beginning to shake up the city's coffee landscape in the same way that craft brewers have dramatically altered the beer market.

Neighbors might recognize Brü from the Horner Park farmers market, where Creighton has been a vendor for the last two summers.

During that time, he's been building branding recognition, testing new roasts and brews (it was market customers who demanded cold brew), and searching for a retail location.

After sharing space with Big Fork Brands, known for its bacon sausage, at 2707 W. Lawrence Ave., Creighton found the perfect home for Brü just across the river, at 3005 W. Lawrence Ave.

"I'm here in two minutes," said Creighton, who lives in Albany Park with his wife, Rebecca, and their two small children. "I always fantasized about being a neighborhood roaster."

It didn't hurt that his new landlord, who recently bought and rehabbed the building at Lawrence and Sacramento, was more than willing to throw in thousands of dollars worth of upgrades to sweeten the deal.

"They put in a floor drain, a mop sink, a hand sink, a dish sink — the building owner did it all," Creighton said. 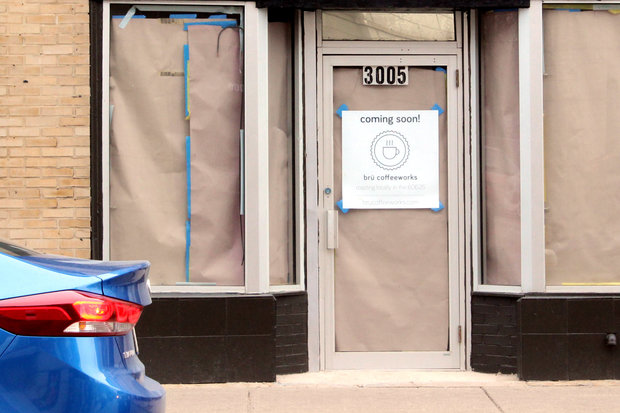 Bru Coffeeworks is set to open at 3005 W. Lawrence Ave. by the end of April. [DNAinfo/Patty Wetli]

Though neighbors have been salivating over the prospect of a new java joint within walking distance, Creighton cautioned that at least out of the gate, Brü isn't going to be a "regular-hours coffee shop."

The store's primary purpose initially will be to serve as a roastery and sales outlet for Brü's single-origin beans.

"We'll have retail and we'll eventually be serving cups of coffee," he said.

It's a passion he discovered more than a decade ago, when he met his future father-in-law.

"He roasted his own coffee. To this day, that's probably the best cup of coffee I've ever had," Creighton said.

The following Christmas, Rebecca bought him a tiny home roaster that accommodated beans for about five cups of coffee.

"I met the guys at Intelligentsia ... they laughed. 'We spill more [beans] than that," Creighton recalled.

By the time the couple's first child was born in 2010, Creighton had graduated to a one-pound roaster and had immersed himself in all things coffee — in his spare time.

That same year, Creighton said his dissatisfaction with his job in media sales reached its breaking point. His wife suggested he take time off, stay home with their newborn son and pursue roasting more seriously.

He eventually started giving some of his beans to a friend, who asked for more. Then her neighbor wanted Creighton's beans, and the momentum behind Brü has been snowballing ever since.

"All I'm doing is offering really good coffee," he said. "My goal is to provide people with coffee they can brew at home better than any coffee shop."