NFL Draft in Chicago: Here's What To Expect This Year

The NFL released Friday more details of its "Draft Town" festival running April 28 to 30 in Grant Park. Bigger than last year's, this month's festival will allow guests to enter a replica locker room, use virtual reality headsets, and get a digitized bronze bust of themselves as if they were in the Hall of Fame. 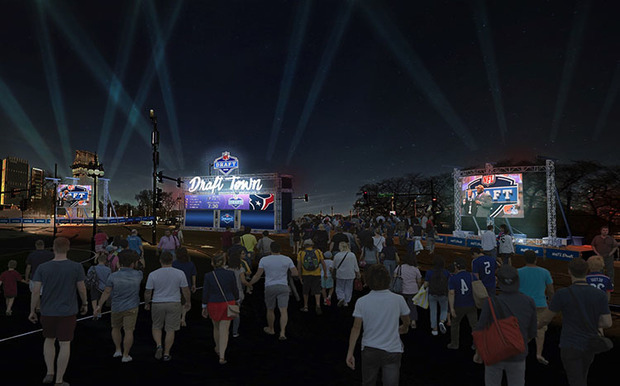 A rendering of the Draft Town festival at night. [Provided]

If last year's "Draft Town" festival inhabiting Grant Park took up 15 to 16 football fields, this one will occupy more than 20, the NFL says. The focus of this year's festival will also shift further away from Michigan Avenue and more toward the lakefront, with TV sets and the draft's "selection square" where picks are announced encircling Buckingham Fountain.

The Ferris wheel, a new attraction, will sit on a Grant Park lawn at roughly Van Buren Street, offering spectators sky-high views of the draft as well as the city skyline. Last year, fans were able to run a 40-yard dash alongside NFL stars on an LED screen, hop in a skydiving simulator, or compete in a five-on-five flag football tournament, among other activities.

Chicago was deemed a successful host last year, but city officials drew scrutiny for waiving a nearly $1 million park rental fee for the NFL, a multibillion dollar enterprise. City officials last month indicated the fee would be waived again, citing the NFL's "tremendous investment." The Chicago Park District has yet to respond to a Freedom of Information Request seeking the NFL's contract documents with the park district.

Last year's draft delivered 37,000 booked room nights and an overall $82 million economic impact, $44 million of which was direct spending, according to a spokeswoman for city tourism booster Choose Chicago.

Here are all the attractions on deck for this month's "Draft Town" festival:

•"Draft Town Tailgate" – Enjoy selections from Chicago’s restaurants, which were not disclosed Friday.

•Get a picture taken behind the podium at the official NFL Draft set.

• Wilson Football Factory: see how NFL game balls are made.

•Grab a bag of Skittles at the Skittles Locker Room.

•Taste up to 12 flavors of Mountain Dew products.

•Combine Corner with vertical jumps and the 40-yard dash against virtual NFL players.

•Autographs from current NFL players and Hall of Famers. A list of players confirmed to be attending the draft: