LINCOLN SQUARE — Bang Bang Pie Shop owner Michael Ciapciak has been eyeballing a particular storefront on Damen Avenue for years and when it became available at the end of 2015, he pounced.

After announcing a second Bang Bang location via Twitter, Ciapciak chatted with DNAinfo Chicago about his plans for the new pie shop, which he's aiming to open by late spring/early summer.

@meowing_at_u - indeed it is! We love #ravenswood & are pumped to serve the neighborhood!

Bang Bang Pie will make its home in the storefront formerly occupied by Dolce Casa Cafe, 4947 N. Damen Ave., a development careful observers have been speculating about ever since Dolce owner Ross Outten hinted in a blog post that he had sold his business to "a Logan Square pie maker."

The pie maker was indeed Ciapciak, whom, it turns out, Outten had beaten to the punch five years ago when Dolce's original owners put the restaurant on the market.

"I always admired the general feel of the space — it's a warm place, it's a comforting place" but "Ross made a quicker decision than I" when it came to making an offer on Dolce, recalled Ciapciak, who used to live in the area in his pre-Bang Bang days, when he was a writer for Forbes Travel.

Ciapciak went on to open Bang Bang Pie in 2012 with Dave and Megan Miller. The pie shop, at 2051 N. California Ave., quickly gained a rabid following for its pies and biscuit sandwiches, drawing lines of customers that frequently stretched down the block.

The Millers sold their share of the business to Ciapciak in 2014. The couple opened Baker Miller in Lincoln Square later that same year, followed by Hot Bar in Ravenswood Manor in November 2015.

Prior to the Millers' departure, the trio had been considering a second location in Pilsen but those plans were eventually dropped.

"We've been presented with so many opportunities" to open a second Bang Bang, but nothing worked, Ciapciak said.

When he heard Outten was closing Dolce Casa, Ciapciak fired off an email and a deal was quickly arranged.

"For us, it's perfect," Ciapciak said of the storefront.

Outten had already done most of the heavy lifting in upgrading the kitchen and interior, saving Ciapciak tens of thousands of dollars in build-out costs.

Customers can expect the Lincoln Square Bang Bang to feel much like its Logan Square counterpart, but there will be differences, he said.

For starters, the Damen Avenue shop will have 400 more square feet than the Logan Square Bang Bang.

"I want to replicate the energy in a more reasonable space," Ciapciak said.

As for the menu, Bang Bang's "greatest hits" will definitely turn up at Damen, but the locations won't have 100 percent overlap, he said.

"There will be unique items to each, it won't be cookie cutter," Ciapciak promised.

Though he'll be hiring some new staff, many key employees — a fair number of whom live in Lincoln Square — will transfer from Logan Square.

In fact, giving his staff room to grow was Ciapciak's driving force behind the new location, he said.

"You reach the point where people hit their peak and you'll lose them," he said.

While it might make smarter business sense to maintain a revolving door of employees rather than open a new shop, Ciapciak said he opted to provide staff with the additional opportunity.

Bang Bang will join the vibrant "Damen district" business community that's sprouted in the past year, becoming what Ciapciak called "its own little enclave."

Lincoln Square/Ravenswood is also known for its loyalty to and support of local businesses, which is a big plus for a bakery that relies on repeat customers, Ciapciak said.

For folks who maybe schlepped to Logan Square once a month or a couple of times a year for pie, the Damen location has made a daily dose of Bang Bang infinitely more accessible, he said.

Now all Ciapciak has to do is stock a supply of ingredients, take delivery on some tables and chairs and wait on his business license. 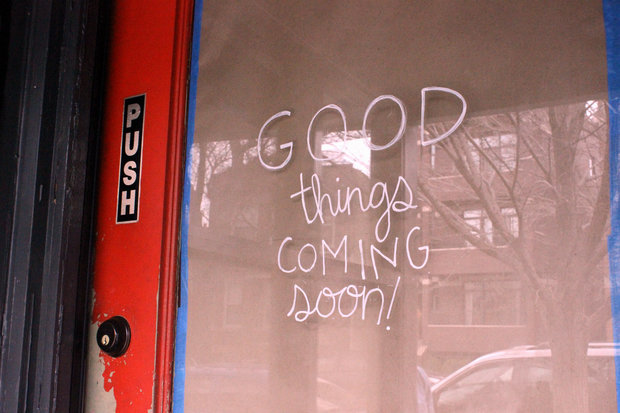 A sign on the storefront promises good things to come. [DNAinfo/Patty Wetli]