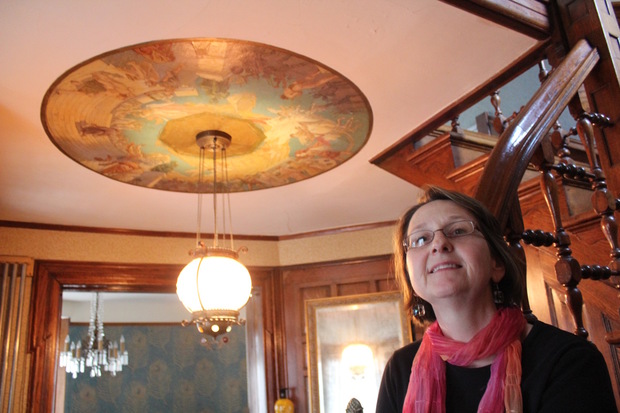 Judy Koessel said she discovered the mural in her house's foyer was connected to the World's Columbian Exposition after Googling the artist's name. [DNAinfo/Sam Cholke]

RIVERSIDE — It’s unlikely any living person has seen what the largest piece of artwork at the 1893 Columbian Exposition looked like, except those who have visited a little house next to the Des Plaines River in west suburban Riverside.

Judy Koessel has discovered that the painting on the ceiling of her foyer is the model muralist William de Leftwich Dodge used to paint the 300-foot-wide dome of the White City's Administration Building, the single largest piece of artwork at the fair.

“He’s the most famous guy you’ve never heard of,” said Koessel, who has pored over the details of Dodge’s life trying to figure out how his painting ended up in her house.

Koessel said she and her husband moved into the turn-of-the-century stone house in 1999 and thought the painting was just another one of the former owners' many curios until she spotted a signature and Googled the name.

“This guy was a mover and a shaker and hung out with the most prestigious people of his time,” Koessel said.

Dodge made his living doing huge murals at places like the Library of Congress and the New York State Capitol building, but he got his start after returning from art school in Paris by painting “Glorification of the Arts and Sciences” for the fair.

The mural was massive and filled nearly all of the Administration Building’s dome, which rose 277 feet over what is now Jackson Park. But few people since the fair have any idea what it looked like. There are few surviving images of the mural and none that show it in its entirety or what it would have looked like in color. 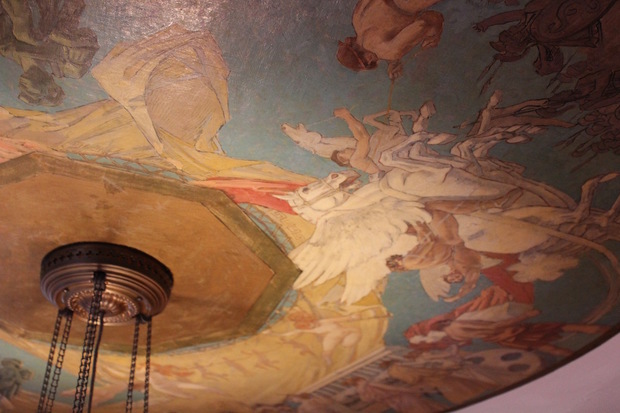 Very few photos of the original mural exist and the model is the only suggestion of what it would have looked like in color.

Even researchers and experts have little idea what it looked like.

“The only image that I've ever seen looking straight up into the dome shows the central area blown out by the light coming in from the sides,” said Lisa Snyder, a researcher at the University of California in Los Angeles, who has spent more than a decade collecting historic images to create a computer-generated rendering of the fair.

Snyder said another image does seem to lend credence that the mural in the Riverside home was a model. The image does offer "a hint of a mural in the zone immediately surrounding the oculus, and that maps to the images the Koessels shared with me."

So it makes sense that it took Koessel months to find a picture of Dodge working on the familiar-looking mural at the fair in a book about American artists in Paris in the 1880s. She said she was lucky that an employee of the fair picked up some of Dodge’s sketches of the painting and stuck them in his scrapbook, which is now at the Newberry Library, and is how Koessel finally identified the mural.

Koessel said she is now convinced that her mural, stuck to the ceiling of her foyer with wheat paste, was done by Dodge to prepare for the fair.

The model features pantheon Greco-Roman figures, including one that looks suspiciously like the woman who would eventually become Dodge's wife. A parade of robed figures carry symbols of art and architecture as a winged Pegasus flies by and armies muster in the background. 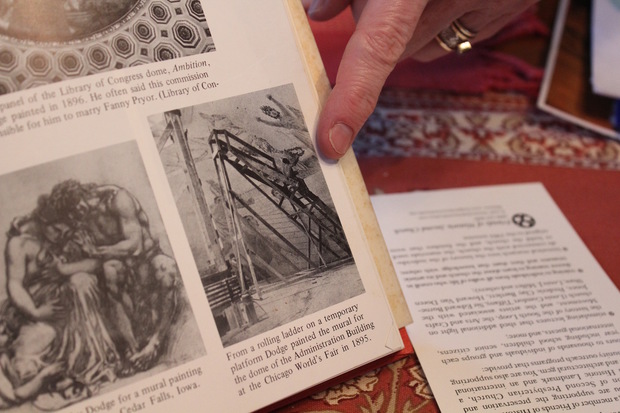 Koessel said it took her months to figure out what the mural was until spotting Dodge working on it in a book about American artists in Paris.

But Koessel said the mural won’t have a home at her house for long.

She said she’s looking for a museum or art collector who can take the mural because Cook County is proposing to buy all the houses in her neighborhood, knock them down and incorporate the land into the neighboring Cermak Woods.

Robert Rose, the executive director of the Cook County Lank Bank, said the 30 homes are in a flood plain that has had significantly flooding in recent years, which was disastrous in 2013.

He said the program is voluntary and the county is hoping to make offers to the Koessels and others in March.

Koessel said the flooding has gotten so bad that their mailbox has been entirely underwater three times in the last five years.

She said whether or not she and her husband sell the house, they need to find a new home for the mural.

“It’s been my intent to find someone who knows it and respects it and probably can put it in a museum,” Koessel said.

She said she would prefer that whoever takes the mural finds a way to publicly display it.

“I wouldn’t want it to go into someone’s archive,” Koessel said.

Her dream is that someone will buy the mural for a permanent public exhibition of artifacts from the Columbian Exposition, whether that be a museum or a themed hotel. 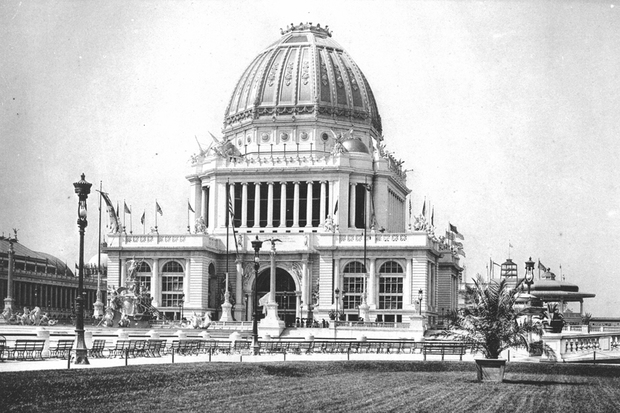 The Administration Building dome rose nearly 300 feet into the air and there are very few pictures of the mural on the interior of the dome. [Wikimedia Commons/C. D. Arnold]

Koessel said she's still not entirely sure how the mural ended up in the house, but suspects it was found by the previous owner, Oscar Jenke, an antiques buff known for scouring Maxwell Street in the 1930s for treasures from the fair and other trinkets from estate sales.

However the mural ended up in her house, Koessel is waiting to hear what the county proposes to do next before deciding where it will go.

Rose said the money available to buy the 30 homes expires in 2019. 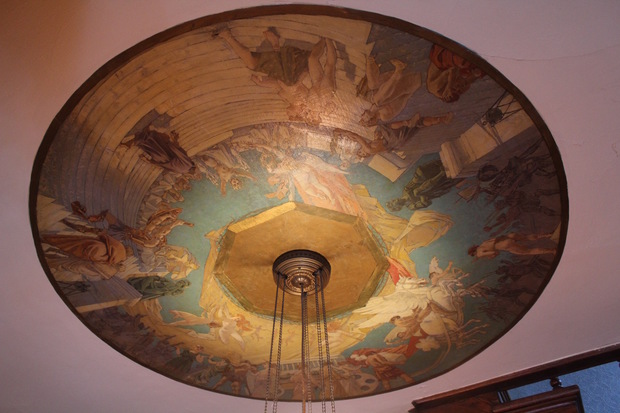 The mural in Koessel's house is approximately 60 inches across, but the actual mural for the fair would have been 300 feet across. 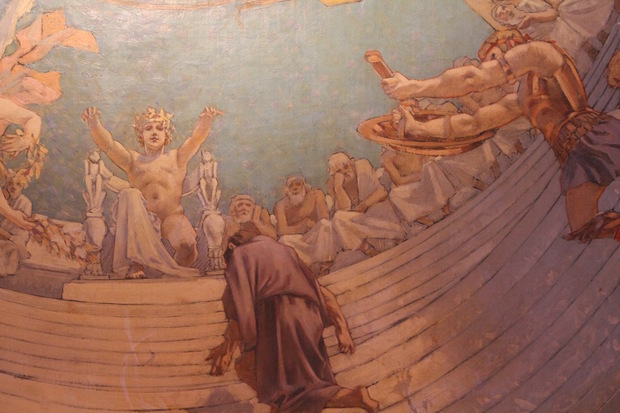 The mural in Koessel's home was likely the model for the largest mural of the fair on the dome of the Administration Building. 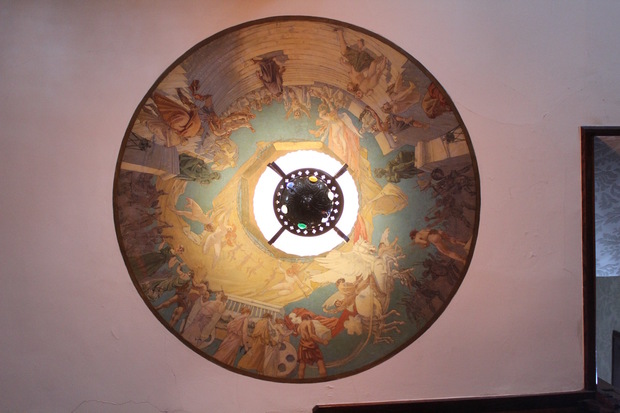 Koessel is trying to find a new home for the mural now because Cook County is proposing making her property part of the neighboring forest preserve.