Which Race Is More Important Than President? Committeeman

By Patty Wetli |&nbspMarch 3, 2016 9:10am
@Pattydnachicago
Twitter Facebook Email More
Committeemen play a huge role in local, state and federal elections — some might even argue that your committeeman has more direct influence on your life than the President.
View Full Caption
Shutterstock

ALBANY PARK — Forgive residents of the 33rd Ward for their confusion when "vote for Dick Mell" signs began popping up on neighborhood lawns.

Didn't Mell retire from his aldermanic post back in 2013, replaced by his daughter Deb?

He did, but while the senior Mell may have stepped down from the City Council, he remained the 33rd Ward's Democratic committeeman, and he's running for re-election in the March 15 primary.

That's one mystery solved, but it brings up another question: What exactly is a committeeman?

If Chicago's political parties, particularly the Democratic Party, are "machines," committeemen are the  gears — or perhaps more accurately, the grease that lubricates the gears.

Simply put, they're the men and women who get out the proverbial vote and can make or break a candidate with their support — and by extension, the party's.

The clichéd depiction of king makers cutting deals in smoke-filled back rooms isn't that far from the truth, but what a lot of people don't realize is that these ward bosses are themselves elected. 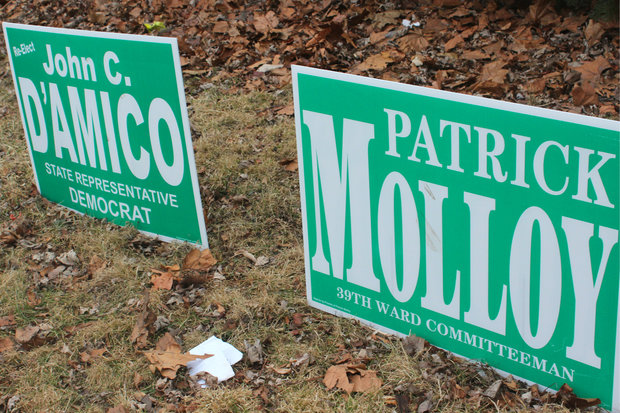 A committeeman's chosen candidates — be it for alderman, state rep or president — receive access to the party's apparatus and volunteer network. [DNAinfo/Patty Wetli]

Why you should care

In 2012, Dick Mell won the 33rd Ward committeeman job with fewer than 2,000 votes, half of what his daughter needed to be elected alderman in 2015.

Given the disproportionate influence committeemen hold — it's not a stretch to say these folks make a bigger political impact at the local level than the president — it behooves voters to pay attention to this box on the ballot.

In key races across the North Side, incumbent committeemen are facing challengers from within their own party:

• Dianne Daleiden, who mounted a serious campaign against Ald. Pat O'Connor for 40th Ward alderman in 2015, is hoping to wrest the committeeman job from him this year.

• Robert Murphy is challenging incumbent Patrick Molloy for 39th Ward committeeman, a post only recently vacated by Randy Barnette, husband of Ald. Margaret Laurino. In the 2015 aldermanic elections, Murphy nabbed 43 percent of the vote in his bid to unseat Laurino.

• Mell is facing off against Aaron Goldstein, a former Cook County public defender who previously ran for state representative in the 40th District. Goldstein was bested in that race by Jaime Andrade, a Mell staffer who had been appointed to serve out the 40th representative term vacated by Deb Mell when she traded the statehouse for City Hall.

What's in a committeeman's job description?

For an inside look at what a committeeman does, DNAinfo Chicago turned to Jack Lydon, the 47th Ward's Democratic committeeman from 2014 to late 2015. He also ran for the City Council against former Ald. Gene Schulter in 2003.

One thing committeemen don't do, anymore at least, is dole out patronage jobs.

There are two committeemen per ward in Chicago, Lydon explained — a Democrat and a Republican — and each serves as their constituents' representative on their party's central committee in Cook County.

At the very beginning of an election cycle, candidates jockey for a committeeman's endorsement: a seal of approval that carries a host of advantages.

For one, endorsed candidates are placed on the party's official candidate slate. These are the names printed on the "palm cards" handed out as voting booth cheat sheets.

Even more important, a committeeman's chosen candidates — be it for alderman, state rep or president — receive access to the party's apparatus and volunteer network within any given ward. 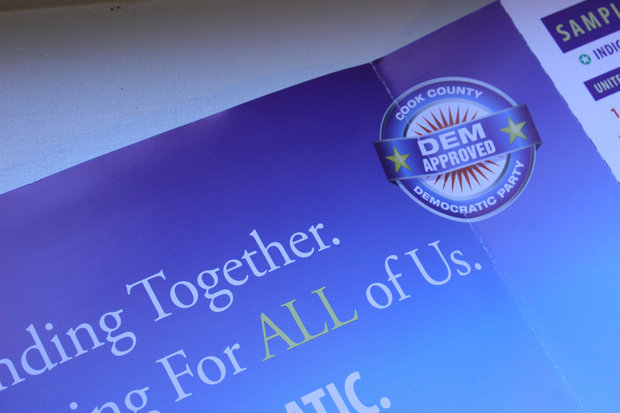 This army of party faithful will collect signatures to get a candidate on the ballot, pass out campaign literature, ring doorbells, work phone banks and put up yard signs.

"It's hard, cold, wet unpleasant work," Lydon said. "But that's the real nuts and bolts of it — getting more votes for a candidate."

Why does anyone want the job?

Committeeman is an unpaid gig, so why would anyone want the job?

Control of the party's foot soldiers is one reason aldermen often also run for committeeman. It gives them a distinct advantage over potential opponents.

For an anti-machine alderman like Scott Waguespack (32nd), who frequently votes against Mayor Rahm Emanuel, holding the committeeman job is a way "to protect his flank" against an opposition challenger more favorable to the machine and the mayor, Lydon said.

For an intraward foe, like Daleiden or Murphy, winning the committeeman post would provide the means to build an organization that rivals the incumbent alderman's.

"They gain access to the Board of Election and to the national Democratic Party," Lydon said.

One of the perks provided by the national party: a massive database of voter information that would be difficult to obtain otherwise, he said.

Though the committeeman title is most often tied to a ward's alderman, the office holder's power isn't limited to local politics.

Committeemen also bring their resources to bear in statewide and national elections, and their ability to deliver votes can help push a ward's priorities up the food chain.

"In the 47th Ward, the main issue is schools," Lydon said. "We have four state legislators in the ward — we help them, and they in turn support CPS."

An influential committeeman also can net tangible benefits for the ward.

"Having an effective Democratic organization [in the ward] helps immensely," said Lydon. "The 47th Ward for decades was very effective, and that put it on the map," spilling over into resources for the area like Sulzer Library and the Brown Line renovation project.

Getting out the vote

Getting the right voters to the polls is where a committeeman earns his or her stripes.

"It's always been my philosophy: I'm not out there to engage and change minds" — i.e., turn a Republican into a Democrat, Lydon said. "I'd rather go find a Democrat and get him to the polls."

Finding those Democrats starts with a phone call. Actually, lots of phone calls.

"You ask if they're likely to vote and if so, for what candidate," he said.

Thanks to early voting, which Lydon called a "bonanza" for committeemen, once Election Day rolls around, committeemen have a list of who's voted and who hasn't.

In the case of the latter, especially if they've been previously identified as a supporter of an endorsed candidate, "you go and literally find them," Lydon said. "You even drive them to the polling place in the case of senior citizens."

Committeemen also are responsible for making sure polling places are open and that people have an opportunity to vote.

While this is where Lydon said "shenanigans" can come into play, it's also where a committeeman can keep the democratic process from going off the rails.

Case in point: In the November 2014 election, poll workers at Welles Park were overwhelmed by a flood of voters taking advantage of same-day registration.

At one point, the line of people waiting just to register — there would be another wait to vote — stretched outside the field house nearly all the way through the park to Montrose Avenue.

"Big shots were there from all the campaigns," Lydon recalled.

As darkness fell and temperatures dipped and voters could easily have opted to bail out, Lydon found the park's superintendent and got her to open up the field house gym to accommodate the waiting horde.

Food and bottles of water materialized, not courtesy of the Board of Election, but the ward's committeeman.

"The enjoyment I've gotten is to see how I can have a personal influence on voting ... getting more people to vote," said Lydon, who remains a precinct captain.

"There's no better place to be ... when they're counting the votes," he said.

Marriage Proposal Do's And Don'ts From Chicago Restaurants That Know