By Patty Wetli |&nbspMarch 1, 2016 5:38am | Updated on March 1, 2016 2:12pm
@Pattydnachicago
Twitter Facebook Email More
The crumbling overpass at Western and Belmont will be torn down this weekend.
View Full Caption
DNAinfo/Patty Wetli

ROSCOE VILLAGE — Motorists are in for a world of pain as demolition of the Western-Belmont viaduct gets underway this week.

We've put together a survival guide, including key construction dates, detours and additional travel tips for the 18-month project.

Reporter Patty Wetli warns people to avoid the destruction of the overpass.

Demolition of the viaduct will take place Friday through Tuesday morning, requiring the complete closure of a stretch of Western Avenue, including the Western/Belmont/Clybourn intersection.

• 8 p.m. Friday: Full closure in both directions on Western Avenue between Nelson and Roscoe. Closure of the Western/Belmont/Clybourn intersection.

• 5 a.m. Tuesday: Southbound Western between Belmont and Roscoe will reopen to a single lane of traffic.

CDOT has posted detour routes for both Western and Belmont and is strongly encouraging drivers to use them.

"We ask that motorists use the major arterial streets that have capacity," as opposed to residential streets, Scheinfeld said.

To avoid Western altogether, bail out at Diversey or Irving Park Road. Resume north-south travel on Ashland Avenue or Elston and Kedzie.

Belmont detours are posted at Ashland and Elston.

Motorists on Clybourn will be detoured along Damen, Roscoe and Campbell.

CTA buses will be rerouted during this weekend only. For route alerts related to the No. 49 Western bus, click here. 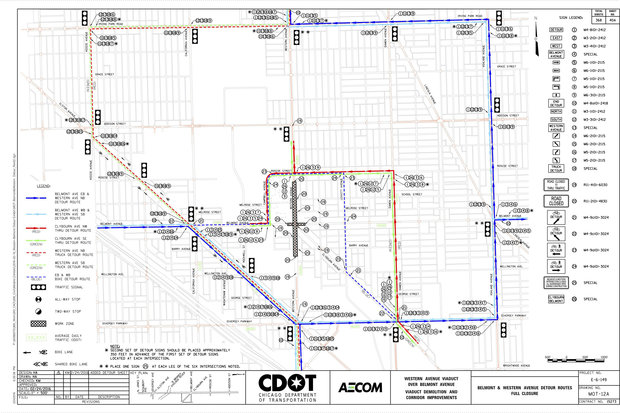 A map of detour routes. [Chicago Department of Transportation]

"We shouldn't sugarcoat is — this is going to be a major project," Ald. Deb Mell (33rd) said at a press conference Monday.

During Stage One of the 18-month construction schedule, Western Avenue will be reduced to a single lane in each direction from George Street to Cornelia Avenue.

Key dates: Stage One is expected to last for five months, or at least through summer. Crews will be completing viaduct demolition work, as well as reconstructing the intersection at grade level and laying down temporary pavement.

• During this phase, keep in mind that no left turns will be allowed from Western onto cross streets between George and Roscoe.

• If using one of the recommended detours isn't an option, give yourself plenty of extra time to make it through the construction zone. This holds true for CTA riders of the No. 49 Western bus, which will maintain service on Western except for during the full closure.

• Unless you're a glutton for punishment, avoid the construction area during Lane Tech arrival and dismissal, when more than 4,000 people converge on Western and Roscoe at the same time. The first bell rings at 8 a.m. and school lets out at 3:15 p.m.

According to CDOT, Lane Tech administrators are urging parents to use Addison or Rockwell for pick up and drop off instead of Western. Lane staff will not be able to turn left onto Western out of the school's parking lot. 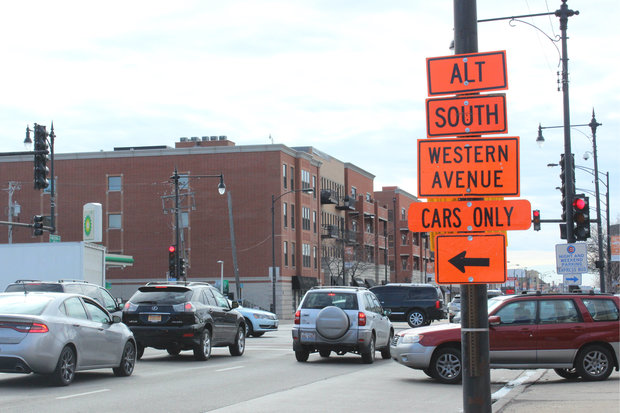 CDOT has posted detour routes for both Western and Belmont and is strongly encouraging drivers to use them. [DNAinfo/Patty Wetli]

Once Stage One wraps up, congestion should ease on Western, with two lanes of traffic open in each direction.

• Belmont will be reduced to a single lane of traffic in each direction at the intersection with Western for approximately eight months.

Light at the end of the tunnel

The Western Avenue Improvement Project — affecting a 1.25 mile stretch between Logan Boulevard and Waveland Avenue — should be completed by summer 2017.

Though many motorists enjoyed using the viaduct to flyover the Belmont-Western intersection, Scheinfeld said its demolition was long overdue.

The overpass had been labeled "structurally deficient" and was "past its useful life," she said.

For drivers concerned that replacing the overpass with a five-leg grade-level intersection will increase travel times, Scheinfeld noted that the project adds a third auto lane on Western during morning and evening rush hours.

"There will be greater capacity when it's complete," she said.

Ald. Mell called the viaduct a "detriment" to the area, serving as a physical barrier to pedestrians and hampering development.

"Who would build on this corner when this is your view?" Mell said of the Western-Belmont intersection. "We try to encourage people to envision things without this monstrosity."