LINCOLN PARK — Let's face it, constantly paying attention to how extremely screwed up things are in Chicago these days can be real downer.

If it's not the city's financial doomsday, it's the Police Department trust crisis.

Shootings have skyrocketed. Murders have doubled.

The sky is falling on the Chicago Public Schools. Chicago State even canceled spring break.

And, on a personal note, I've spent way too much time yelling into the City Hall echo chamber.

It's all frustrating as hell.

So, on Thursday I decided to start the weekend a little early.

Some friends and I headed to Lincoln Hall, 2424 N. Lincoln Ave., my first visit to the great little venue across from the Biograph to see The Weeks, indie soul rockers from Jackson, Mississippi, centered around twin brothers with great hair: Cyle and Cain Barnes. Cyle sings and Cain plays drums. I'm a fan.

The Weeks kicked off their tour by serving up family-style rock 'n' roll that I paired with an easy-drinking pint of Lagunitas Pils.

It was a welcome escape. I didn't once think about shootings, murder or the death of spring break on the South Side. Thanks, guys. Come back soon.

If you like good music, you should give The Weeks a chance.

I'm particularly fond of "House That We Grew Up In," a sing-a-long anthem that reminds idealistic dreamers, "They can't stop us."

Plus, the opening act, Tristen, turned out to be an unexpected treat.

The melodious Nashville-based solo effort of pop-music storyteller Tristen Gaspadarek (she's been a backup singer for Jenny Lewis) lured us from the bar earlier than we expected by an inspired, emotional performance that commanded attention.

Later, while buying her latest albums and having a nice chat with her parents, I learned that Gaspadarek grew up in suburban Lansing, one village east of my hometown. We chatted a bit about faded memories of people and places that we once knew.

"I used to slice deli meat at Komo's," she said.

I'll admit it, that detail about working a deli slicer reminded me of Mayor Rahm Emanuel's half finger and, by extension, all the tensions tearing at our city. But it only lasted for a moment — until a glance at Gaspadarek's hands confirmed she had escaped her meat-shaving days with all 10 fingers intact. 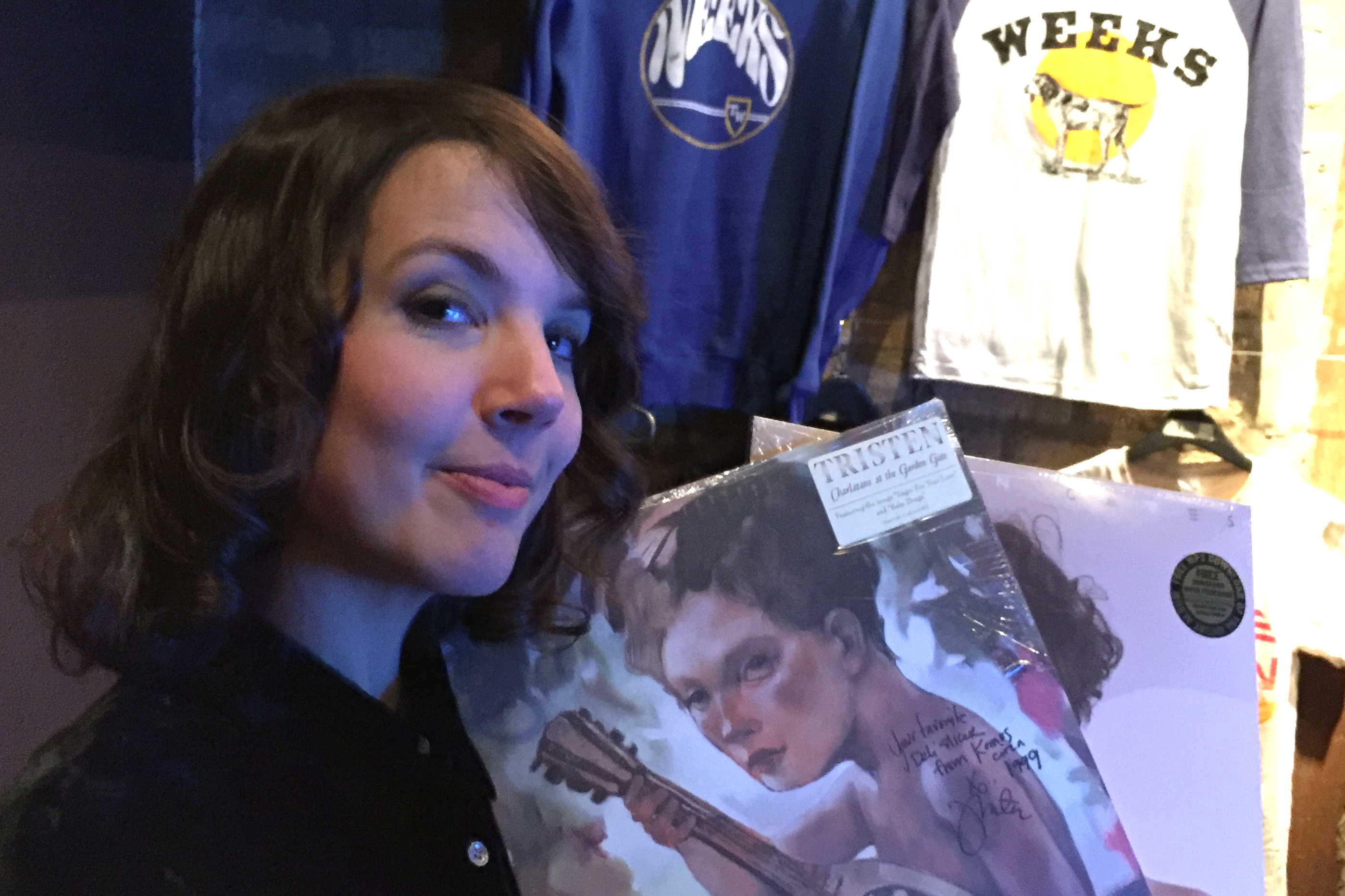 Tristen Gaspadarek grew up in suburban Lansing where she sliced deli meat at Komos in 1999. Now, the singer-songwriter lives in Nashville but passed through town to perform as the opening act for The Weeks at Lincoln Hall. [DNAinfo/Mark Konkol]

For me, the seminal moment of the former Komo's counter girl's set was a rollicking ballad, "Psychic Vampire," that Nashville Scene recently described as "a Fugitives poem of sorts for the Facebook generation, substituting sly references to emojis and subtweets for Ransom's transmogrifying bee."

It's on her new record which is "coming out soon," Gaspadarek said. But here's a taste via Instagram:

When the night was over I felt soothed, relaxed and, thanks to an al pastor burrito from Allende, 4204 N. Lincoln Ave., completely satisfied.

But — cue my narrator voice — up in Rogers Park ... chaos returned to Chicago.

They called the mayor's task force a "PR stunt." I guess that's one way to put it.

"We don't trust you, and we don't trust the mayor," one protestor told the task force members before they were escorted from the stage for their safety. "You will only restore trust when you let the people lead the way."

Needless to say, my stress returned Friday morning and I wanted to yell at people again.

For the last week or so, I've been pitching a fit about the lack of advocates for the public's right to know on the mayor's handpicked "independent" task force only to get brushed off with lawyered-up talking points from Emanuel and the City Hall spin machine.

In case you missed all that, here's a recap:

After writing that column, I naively figured it made sense for City Hall to, you know, bend over backwards to protect the task force from the appearance of being a public relations stunt.

I thought City Hall might even call up the folks at the Society for Professional Journalists to include feedback from people advocating for the benefits of transparency during the process of reforming a police department that most Chicagoans don't trust.

When I brought up that idea to Attorney General Lisa Madigan, the state's top law enforcement officer, even agreed and said — and I'm clearly paraphrasing here: Duh!

But, you know how it goes in Chicago politics.

Instead, the mayor "answered" my questions with a three-point non-answer that asserted everything above board and operating as it should. He even said, the task force "consulted" the "people" who filed the lawsuit that led to the release of the Laquan McDonald shooting video and everything is just fine.

After Independent journalist Brandon Smith, one of the "people" who filed the Laquan McDonald lawsuit, read my take he posted his point of view on Twitter which turned into an interesting online discussion.

On Friday, Mayor Emanuel tried to smooth things over by saying protesters and City Hall have more in common than anybody might think.

"If we hear each other and what we have to say, you'll find out there's more commonality and common ground than there are differences. That's my attitude about things," Emanuel said, according to the Tribune. "You should hear what other people say, because you may find that, rather than preconceived notions, there is a lot that holds us together."

Given Emanuel's reputation for talking when he should listen, a cynic might translate his take on the protesters' method of communicating their dissent as, "Do as I say, not as I do."

Maybe that's something for the mayor to think about this weekend.

You know what helps? A cold one and a rockin' live music show where all you do is listen, and maybe sing along.

If I learned anything this week, it's that Chicago's live music scene offers a welcome respite from the extremely screwed-up things happening in our town that aren't going away anytime soon.

It's amazing what good can come when you just kick back and ... listen.

Besides, everybody needs a break, even Rahm ... and his City Hall spin machine.