NORTH PARK — With no end in sight to Illinois' budget impasse, students, staff and faculty at Northeastern Illinois University rallied at the school's North Park campus Thursday with a united message for Gov. Bruce Rauner: "Fund our future."

The protest was spurred by the governor's recent veto of legislation that would have restored Monetary Award Program (MAP) grants, which more than 2,000 NEIU students rely on to help cover tuition costs.

Elected officials are playing politics at the "expense of the future of Illinois, which is our students," NEIU Provost Richard Helldobler said.

"The fundamental notion of access to education is being denied," he said. "That's what we're fighting for."

The state is behind on $34 million in allocations to NEIU, along with $7.5 million in MAP funds, according to university spokesman Mike Dizon.

The university has fronted students the MAP money by dipping into its reserves, which should hold out through the fall, Dizon said.

Other state-funded entities have been able to loosen Springfield's purse strings through court orders and other "back door" channels, but Illinois' public universities have been left hanging, Dizon said.

Smaller universities including NEIU and Chicago State have been harder hit than their larger peers like the University of Illinois, which have a broader base of alumni and donors to draw on, he said.

Chicago State University is struggling to keep its doors open through the current semester and even canceled spring break in a bid to save money.

Darren Martin, a member of Chicago State's student government association, spoke at NEIU's rally and brought the crowd to its feet.

"We need to show up in droves," he said. "Maybe it's time for us to start handing out pink slips to legislators."

Helldobler echoed Martin's sense of urgency regarding the upcoming election.

"If you're not paying attention ... pay attention," he said. "What is a candidate's record on social services? On higher education? We have to engage now and stay mobilized. Hey Springfield, fund our future."

The Illinois State Senate is expected to vote next week in a bid to override Rauner's veto of MAP grant funding. 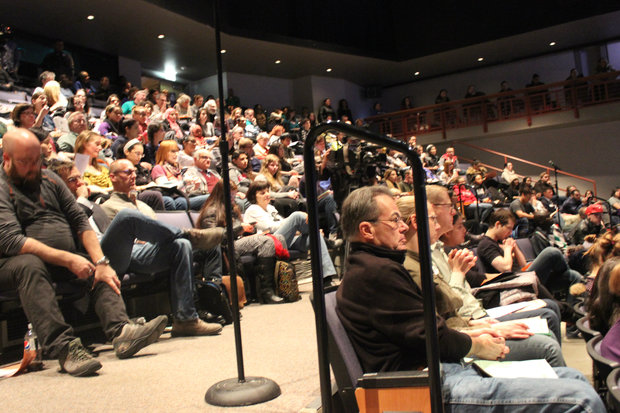