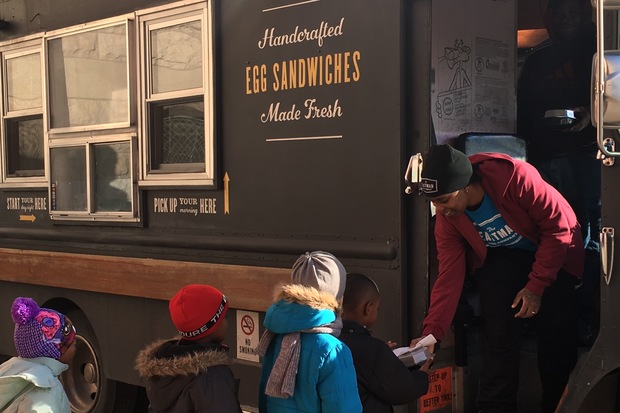 HYDE PARK — The area around the University of Chicago is a regular stop for the Eastman Egg Company food truck, but not because of the eager lunch crowd.

For the last three weeks, around 9 a.m., the truck has pulled up to nearby Ray Elementary at 5631 S. Kimbark Ave., where it’s met by throngs of kids awaiting (some more eagerly than others) warm scrambled eggs with sauteed peppers, spinach and salsa verde.

On Wednesday, it was the first-graders’ turn.

“If you don’t want an egg, just say, ‘No, thank you,’" a teacher reminded the students.

“I love eggs!” a small, bright voice called out.

It’s all part of a nutrition-focused pilot program the food startup has dubbed Eastman’s Honor Roll.

Students queue up and bring their snack back to the cafeteria, where Eastman’s chief of staff Laurel Freidenberg and U. of C. student volunteers engage them in games and a lesson that incorporates topics such as the five food groups and natural versus processed sugars. They are given recipes to take home.

The sessions are held Wednesday, Thursday and Friday for two classrooms at a time. Freidenberg’s lessons are based on curriculum developed by the nonprofit Common Threads, a CPS culinary programming partner.

Students’ reactions to the food have been predictably mixed, ranging from “delicious” to “gross.” For some, it’s their first exposure to different types of peppers.

“I’m really into healthy foods like this,” said Sam, 7, scraping his plastic fork around the salsa cup to catch the remaining sauce. He’d finished his entire mini-omelet, an anomaly among his more selective classmates.

Luke Albrecht, a middle school math teacher, said many of his students are used to something sweet in the morning — cereal or a muffin — and were “unsure” about trying the Eastman breakfast. Afterward, several told him they’d give a savory breakfast more of a chance.

The goal, said Freidenberg, is one most parents can relate to: “To get them excited about healthy food and realize it can be different from what they think healthy food is.” 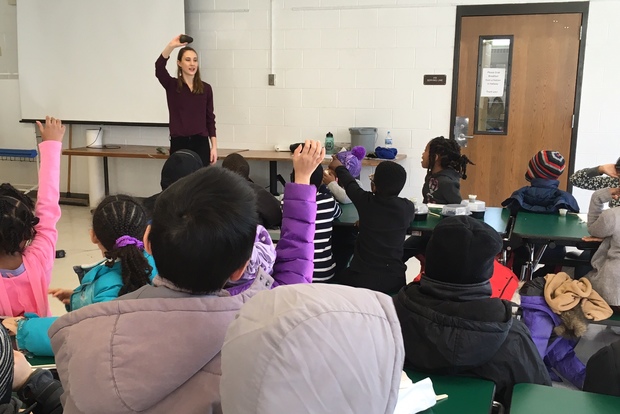 Eastman Egg has a strong Hyde Park connection. Freidenberg is a month away from getting her undergraduate degree at the U. of C., while Eastman’s founder and CEO, Hunter Eastman Swartz, is a student at the U. of C.’s Booth School of Business, and chief operating officer Drew Davis is a business school alum.

Beyond that, the program is a very personal one for Freidenberg, who started developing it in October after brainstorming with Swartz and Davis about the company’s philanthropic efforts.

“I was on a panel and someone asked, ‘What are you doing to give back to the community?’ “ said Swartz, who started the company in 2012 as a truck selling breakfast sandwiches with Slagel Family Farm eggs and meat. (It’s since grown to two storefronts and a coffee bar.)

“That got us thinking about what to do with the truck in the winter. We said, let’s serve meals to school kids,” said Swartz.

Freidenberg ran with it.

The 21-year-old Ohio native said her interest in school food was sparked by a high school capstone project in which she mobilized parents to form an organization and open a dialogue with the district about improving the quality of the food.

“At that point, there hadn’t been a very vocal community complaining about the lunches,” she said.

During that project, and in implementing Eastman's Honor Roll, Freidenberg said she has learned how challenging a nut the school lunch program is to crack, given federal nutrition guidelines and the complicated tangle of city politics and corporate interests.

She was introduced to Megan Thole, Ray’s principal, through a friend whose children attend the school. That was the easy part.

“Initially, we wanted to be able to replace one meal at the school,” Freidenberg said. But under CPS rules, they were only allowed to provide a snack-size portion of food within a certain calorie limit that didn’t conflict with the school-provided breakfast or lunch. 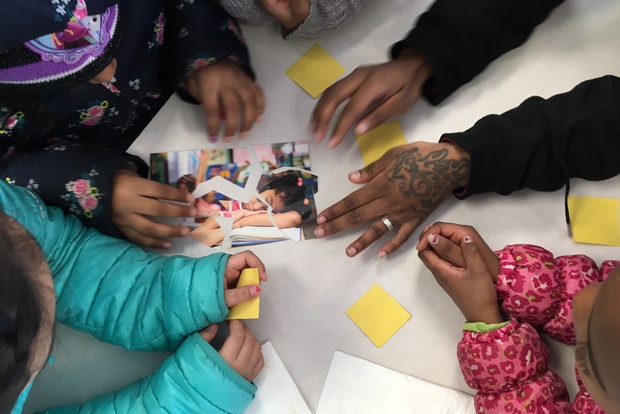 With the help of an Eastman Egg staffer, students piece together a puzzle showing a tired-looking girl who, they agree, probably didn't eat a good breakfast. [DNAinfo/Janet Rausa Fuller]

Still, through her university connections, Freidenberg is exploring ways to expand the program. She contacted the U. of C. Office of Civic Engagement, which has connected her to other neighborhood schools and the university’s faculty, health experts and student groups working on nutrition education. One of those is Mission Nutrition, which was started by U. of C. medical students.

Swartz said that as the company grows — he is looking at locations near Michigan Avenue and in Lakeview for two more storefronts — Eastman’s Honor Roll could turn into a year-round program, perhaps even with a work-study component for older students.

The Office of Civic Engagement's interest in the Eastman program is on the research end. As the program expands, it can be tracked and measured and, ideally, strengthened, said William Towns, the office's assistant vice president.

“We are really interested in the impact piece of it. How does this influence nutrition and the food choices that young kids make?” Towns asked.

The food truck’s final visit to Ray is Wednesday. Freidenberg said the program will start in another school in March. There are four schools under consideration in the surrounding mid-South Side communities.

“Our biggest civic engagement tool we have is our students and alumni, and this is a prime example of that,” Towns said.