NEAR NORTH SIDE —  One school is overcrowded. The other, less than half full.

One's in Chicago’s Gold Coast. The other, in the Cabrini-Green area.

There’s an ongoing effort to merge Jenner and Ogden elementary schools, but it's still being debated.

In the meantime, the kids are getting know each other ... by being kids.

Ogden, which draws students from the affluent Gold Coast and other parts of Downtown, is battling overcrowding that officials expect will only worsen amid constant Downtown development.

Jenner, which draws mostly black students from the Cabrini-Green area, moved into a new school built for 1,060 students 15 years ago, but still enrolls only 240.

While the parents and school officials hash out a potential merger, school leaders have the students coming together anyway.

They've been working together on music programming this year, and have plans for a merged field day with a kickball championship, merging language arts and technology programming, among other ideas.

"Ogden was always considered across the tracks, another world," said Jenner's physical education teacher Sarah Byrd, who is among the teachers driving the partnership. "We knew they were there, and the kids knew about the school. But now, there's a possibility of us coming together.

Despite missing the deadline for next school year, the plan to merge the two schools still is a real possibility for school leaders.

This past fall leaders at Jenner Academy of the Arts, 1119 N. Cleveland Ave., and Ogden International's elementary school, 24 W. Walton Ave., developed the programming partnership called JOLT, which stands for Jenner and Ogden Learning Together. 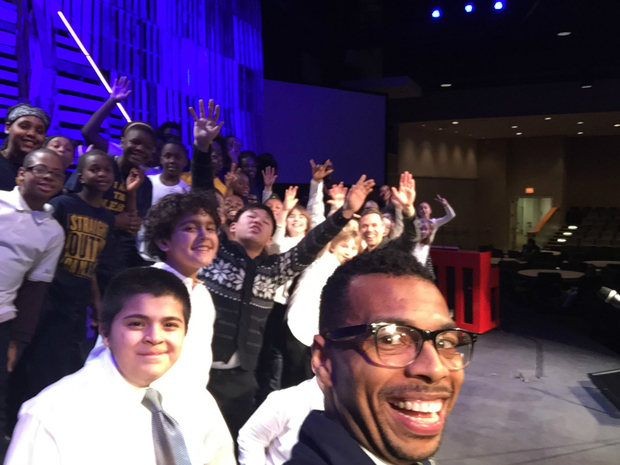 "We want to [blend students] proactively in a way that is respectful," said Terence Swims, the music teacher at Jenner who also served on the task force that was weighing whether to merge the two schools.

"Whether a merger happens or not, our students should work across different communities. In case a merger does occur, they [will be] used to seeing some of these students."

Elliott Nott, the music teacher at Ogden, said the concert was a success.

"It was really neat to do something together, instead of being opponents on the sports field," he said. "They sang a different style of music than we did. Our group really got into seeing [their] gospel style."

Both principals said the merger would be advantageous. But Ogden's Local School Council pumped the brakes on consolidating by next school year, narrowly approving a motion asking Chicago Public Schools CEO Forrest Claypool to start a "community-driven" process exploring the merger without a deadline.

"We need to do considerably more work before we are ready to make it a reality, if we decide to do so," wrote Ogden Principal Michael Beyer in an email to parents after the council meeting.

By state law, CPS would have had to approve and announce plans by Dec. 1 in order for the merger to take effect next school year, but that did not happen.

At the time, Jenner Principal Robert E. Croston called the delay in progress a "yellow light, not a red light."

But the partnership is a sign that both schools are still interested in consolidating in the future, said Byrd.

"Ogden has been here for years but we never quite came together," said Byrd.

Posted by The Ogden International School of Chicago on Friday, January 22, 2016

Swims said not only were the kids delighted to join together for the concert, but he was also overwhelmed by the amount of gratitude he received from parents.

"If we all take the time to consider everyone and consider how it will effect all of our students, then we're moving in the right direction," he said. "That's why we need collaborations like this. It's so students feel like they're part of it and people aren't just moving in on their space."

Even if the schools don't end up merging, blending the school communities is positive for everyone involved, Nott said.

"I don't know if this merger is going to happen. The concert is really about the fact that we're neighborhood schools and we should know each other," he said.