In the second video, the shooting happens at the 17-second mark under the red awning.

DOWNTOWN — After a three-year fight by the family of Cedrick Chatman, videos that show the 17-year-old's fatal shooting at the hands of police have been released.

A federal judge on Thursday ruled that the video should be made public, a ruling that came less than a day after the city said it would stop fighting the video's release. The video was released Thursday afternoon.

According to U.S. District Judge Robert Gettleman and lawyers for the Chatman family, the video shows Cedrick running from two officers after a traffic stop in South Shore on Jan. 7, 2013.

In one angle, the camera quickly jerks from one side of the intersection to the other, since it is an automated blue light camera, making it difficult to see exactly when Chatman was hit. The video does appear to show an officer firing while the teen is still running.

In a second angle, a stationary video shot from nearby South Shore High School, the teen appears to be running away as he is shot.

One officer, identified as Lou Toth, chased the teen. According to the judge and lawyers, the video shows Toth was just feet from Cedrick when his partner opened fire, fatally striking the 17-year-old.

Gettleman said that Officer Kevin Fry's shots could have easily hit the pursuing Toth, according to his interpretation of the grainy video footage.

"[Toth was] on the heels of Chatman," Gettleman said. "This is what bothers me. You might say he was in the line of fire."

Cedrick then falls to the ground, according to attorney Brian Coffman, who represents the family. At that point, an officer flips Cedrick onto his stomach, handcuffs him and presses his boot into the teen's back. 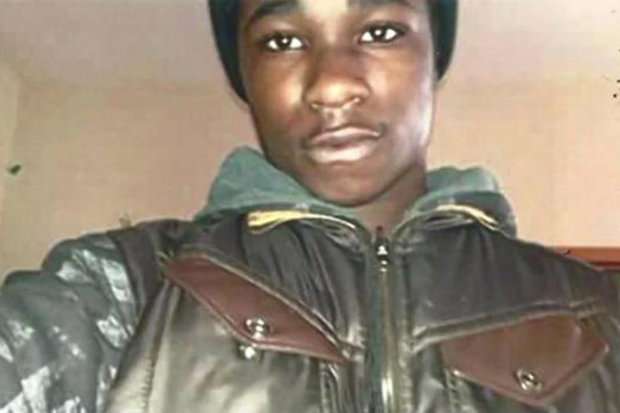 Coffman said the video shows the officers acting recklessly. He said they didn't radio in about the foot chase and never told dispatch that they thought Cedrick had a weapon. (It was later confirmed that Cedrick was unarmed.)

"At no time did these officers communicate with each other," Coffman told reporters after the court's ruling. "They immediately encountered Chatman's vehicle; guns were out."

Steve Patton, the city's corporation counsel, said in a statement Wednesday that the decision to vacate a protective order that withheld the video of Cedrick's shooting was made in "an effort to be transparent."

“With respect to the release of videos of police incidents, the City of Chicago is working to find the right balance between the public’s interest in disclosure and the importance of protecting the integrity of investigations and the judicial process," Patton said.

The judge was not happy about the city's back-and-forth in the matter. The city's reversal came after years of filing motions to keep the video from public view.

"I'm very disturbed by the way this happened," Gettleman said.

But lawyers and supporters of the Chatman family said the city is not motivated by what's in the public's best interest. The city just realized that it can't win this fight, they say.

"At the same time Rahm Emanuel was having a press conference about transparency, he was fighting the release of this video," activist Tio Hardiman said at the Dirksen federal courthouse Thursday. "What does that tell you about his transparency?"

At a small press conference outside the Cook County State's Attorney's office Thursday evening, activists called for Fry to face criminal charges for the shooting.

"After watching these videos, today, I feel — just like the rest of the city of Chicago — that what happened was absolutely reckless and unjustified," community activist William Calloway said. "Time and time again, we've seen African American males running away from Chicago Police and being shot in the back. And we've had to go to court and fight to get these tapes released one by one, because Rahm Emanuel keeps placing protective orders on them." 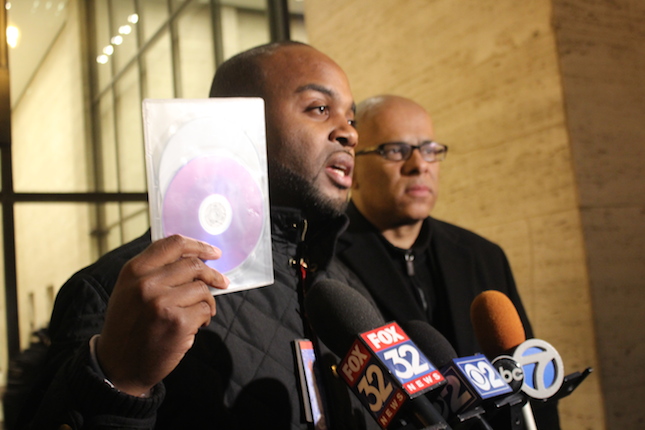 William Calloway holds up a CD with video files from the shooting of Cedrick Chatman after they were released Thursday. [DNAinfo/Alex Nitkin]

The family's wrongful death lawsuit will continue; a court date has not been set, according to Gettleman.

"We're happy that the city has seen the light," Mark Smolens, another attorney for the Chatman family, said of the city's decision not to continue fighting the video's release.

The case goes back to Jan. 7, 2013, when two plainclothes officers made a traffic stop after spotting a stolen car in South Shore. 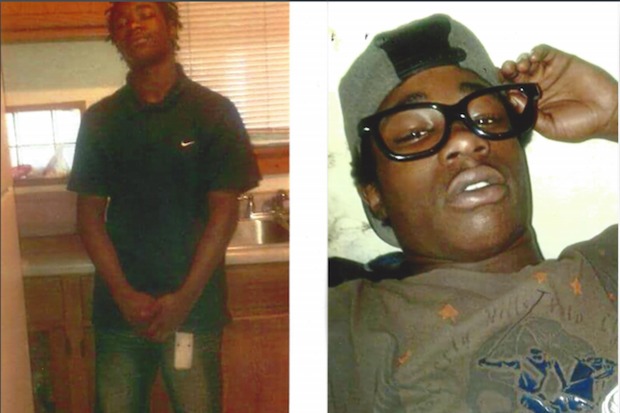 It started, prosecutors said, with a cellphone deal gone wrong.

Around 1:30 p.m. that day, Cedrick and two men — Akeem Clarke, 22, and Martel Odom, 23 — climbed into a man's silver Dodge Charger to buy cellphone service from him, prosecutors related days later.

An argument broke out, Clarke pulled the man into the back seat, and Clarke, Odom and Cedrick began to beat him, according to court documents. After robbing him of $400 in cash, Cedrick made off with the car while Clarke and Odum stayed behind.

About 15 minutes later, Fry and his partner Toth noticed the stolen car near 75th Street and Jeffery Boulevard, next to South Shore College Prep, according to prosecutors. They pulled their unmarked police cruiser in front of the Charger, got out and walked up to it with their guns drawn.

What happened during the next few seconds has been the source of legal debate for nearly three years.

According to a police statement released a day later, Cedrick grabbed something from the car before jumping out and running off. The officers chased him, and he turned toward them, pointing a "black object" he was holding, according to Fraternal Order of Police spokesman Pat Camden.

Fry then raised his gun and shot Cedrick four times. Hours later, the teen was dead.

"Believing the dark object to be a firearm and being in fear for [his] life, the officer fired at the offender, wounding him," Camden said.

Camden since has been criticized for inaccurate comments he's made after police-involved shootings, including after Laquan McDonald's death. He has not made public comments in any cases since the Laquan video went public.

"You see him running away from the officers as fast as he possibly could — he never even begins to turn," Coffman said. "Fry never says anything. He just gets out of the car, watches him run with his gun trained on him, and fires." 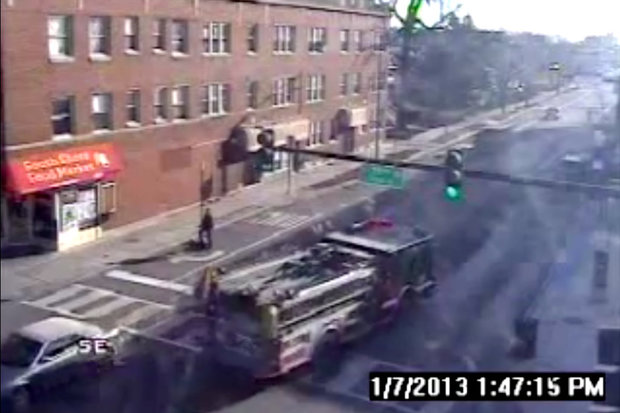 Cedrick Chatman is on the ground and an officer is standing with his foot on the teen.

Satisfied with the police union's version of events, leaders within the Chicago Police Department opted not to punish Fry.

Instead, Clarke and Odum — Cedrick's accomplices in the carjacking — each were charged with first-degree murder. In the written charges, prosecutors allege that the men "set in motion a chain of events that caused the death of Cedrick Chatman," despite being nowhere near the teen when he was killed.

The murder charges eventually were dropped, but the men were each sentenced to 10 years in prison for robbery and unlawful vehicular invasion, according to the Sun-Times.

Cedrick's family, meanwhile, decided to pursue a lawsuit against the city.

When Coffman was brought on to represent them, he said, he wasn't enthused about the case. An official account of the events had suggested not only that Cedrick was armed, but that he pointed a gun at an officer before being brought down.

But when Coffman contacted witnesses and filed Freedom of Information Act requests for the surveillance videos, he said, he became convinced that police hadn't been honest in their handling of the shooting's aftermath.

"The more I saw, the more I realized, 'Oh my God, this is a giant scam,'" Coffman said. "It was unbelievable. They were fighting tooth and nail to cover this up from the very beginning."

Moreover, after Coffman looked into Fry's history, he found a trail of misconduct accusations.

Coffman's wrongful death lawsuit, filed in June 2013 on the Chatman family's behalf, was the fifth civil rights lawsuit since 2006 in which Fry had been named as a defendant, according to court records. The other four lawsuits, alleging violations including excessive force, false arrest and illegal searches, all ended in settlements.

According to the nonprofit Invisible Institute, which tracks police misconduct, Fry has been the target of 30 complaints throughout his career. (The Institute has data from 2001 to 2008 and 2011 to 2015, so there may be more complaints that have not been released to the public). All were marked as "unsubstantiated." He has faced no discipline, according to the site.

Coffman would spend the next two years wrestling with the Independent Police Review Authority investigators to get its findings into public record so he could move forward with his wrongful death lawsuit.

It was September 2015, two years and eight months after Cedrick's death, when the investigators finally released their final report on the shooting. Fry's actions, they concluded, were legally justified.

Two months before that, IPRA investigator Lorenzo Davis was fired for what he claimed was a refusal to change his findings in six investigations of police shootings. Cedrick's case was one of them.

"Cedrick was just running as the shots were fired," Davis later told the Tribune. "You're taught that deadly force is a last resort and that you should do everything in your power to apprehend the person before you use deadly force. I did not see where deadly force was called for at that time."

With Davis gone, IPRA went on to conclude that allegations of excessive force against Fry had been "unfounded."

The final report included a review of the three videos showing the shooting. Unlike the official police account of events, which stated that Cedrick turned to face the officers before he was shot, the IPRA report stated that in at least one video, "It appears that one of [Cedrick's] arms extends toward [Toth, Fry's partner] as he runs."

'A Bomb That's About to Drop' 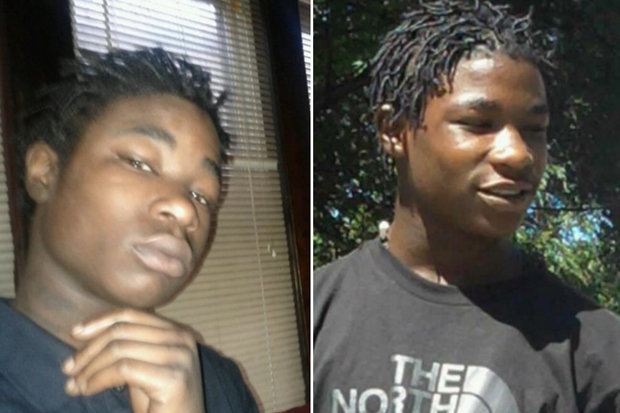 Coffman has no qualms about using outrage from the Laquan video case to draw attention to what happened to Cedrick, he said.

"The symmetry between our case and the McDonald case is pretty obvious," Coffman said. "In both, you've got crooked cops protected by crooked investigators. This is a bomb that's about to drop in the city of Chicago, where everyone suddenly realizes the system is broken."

After the judge agreed to release the video Thursday, community activists addressed the media, slamming the city for what they called a lack of real change and transparency.

"It's open season on young black men in the city of Chicago," William "Dock" Walls said.