LINCOLN SQUARE — The state is broke, the city is broke but some Tax Increment Financing districts remain solvent.

Ald. Ameya Pawar (47th) has outlined a plan to use the TIF funds at his disposal — from the Western Avenue North and Western Avenue South TIF districts — to pay for projects that he said in an ideal world would have been accounted for as part of a broader city-wide infrastructure plan. 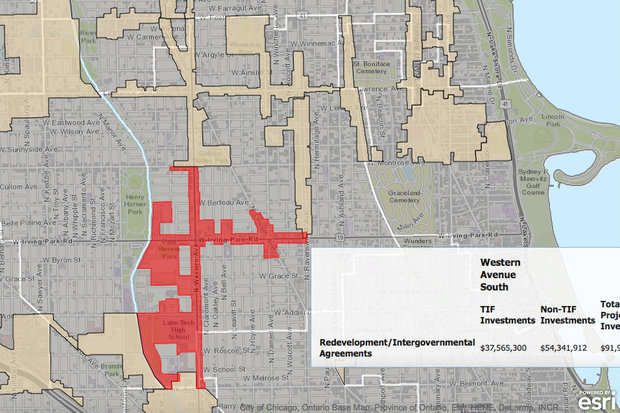 The boundaries of the Western Avenue South TIF district. [City of Chicago]

"This isn't just about what happens at the end of my second term," Pawar said. "I want to make sure these facilities are maintained for generations to come."

His priorities include improvements to schools, parks, Sulzer Library and North Center's Town Square — some of which are used by people from across the city.

"Rather than putting these dollars into private developments, I want to put them into public projects that will drive economic growth," Pawar said. 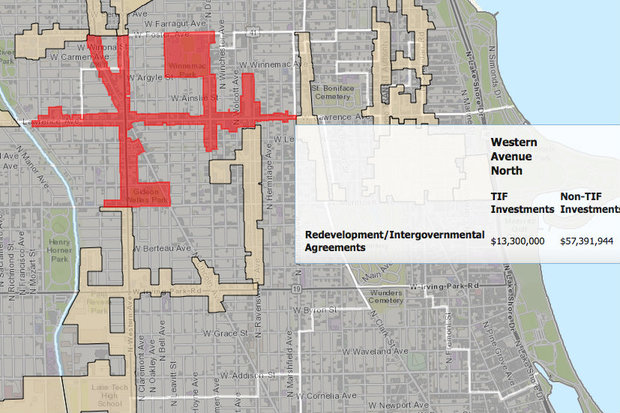 The boundaries of the Western Avenue North TIF district. [City of Chicago]

Pawar hopes to allocate $2 million in TIF dollars to McPherson Elementary, 4728 N. Wolcott Ave., in order to complete the school's outdoor campus. He's already funneled money to the school to help pay for a new playground and outdoor learning garden. This second cash infusion would go toward a turf field and track.

Chase Park, 4701 N. Ashland Ave., would receive $3 million for updates to its fieldhouse, the "most heavily used summer facility in the city," Pawar said. "We need to bring it into the 21st Century," particularly because its programming serves a significant number of children with special needs, he said.

Revere Park's fieldhouse, at 2509 W. Irving Park Road, is a "beautiful old building" in need of attention, including upgrades for the disabled, Pawar said. Improvements to the fieldhouse, designed by Clarence Hatzfeld and dedicated in 1931, are still being assessed, he said.

Sulzer Regional Library, 4455 N. Lincoln Ave., received a $5 million TIF allocation in 2013 for long-deferred repairs to its leaky roof among other maintenance. Further funds, in the $3 million to $5 million range, are needed to "address all the water issues," including peeling paint along the library's ceiling and windows. 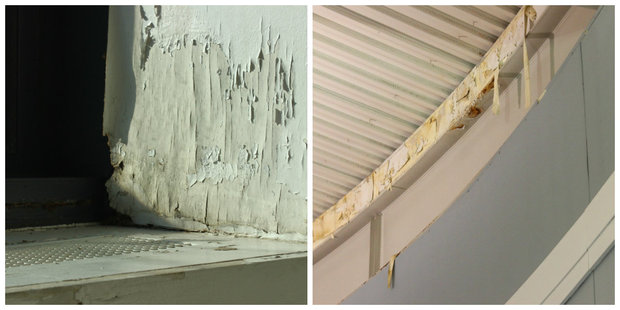 Turning Town Square, 4100 N. Damen Ave., into a focal point for North Center has been on Pawar's radar since he took office in 2011. In 2015, the parcel was chosen as a "People Plaza," with further action still to be determined — build a performance stage? create a tot lot? square off the cul-de-sac? — as are costs.

Pawar has a model in his own ward for how such a space can transform a neighborhood. Lincoln Square may look like it grew up around Giddings Plaza, but the square within the Square only dates back to 1999.

"It took someone to say, 'We're going to do this,'" Pawar said of Giddings. That plaza "paves the way for what we see today" in Lincoln Square and "North Center Town Square has the potential to do the same."

None of these projects are likely to happen tomorrow. Allocating TIF dollars is a process: Proposals are presented, letters of support are provided, a task force vets the project and then each allocation works its way through City Council.

Then there's the matter of when TIF funds are "deposited" (see TIF Balances, below) and whether they're already earmarked for existing obligations (see TIF District Programming for TIF No. 84 and 85, below).