NORTH CENTER — Police are investigating a triple shooting in North Center that left one man dead and two others injured Friday night.

One adult man was dead at the scene, he said. Two other adult men were taken to Illinois Masonic Medical Center.

The victim was later identified as Pablo Ulloa, 25, of the 4700 block of North Whipple Street, according to county records. He was pronounced dead at 7:53 p.m.

Andrew Holmes, an activist and crisis responder, said at the scene that the shooting stemmed from an altercation inside the apartment building. Holmes is a long-time anti-violence activist who travels to crime scenes to comfort and support victims.

Holmes said all victims were men — one black, one Hispanic and one white. A woman also was involved though he did not clarify how. Another witness at the scene told reporters that a woman exited the building in handcuffs.

Holmes said several people were taken into custody for questioning. No arrests or charges have been announced yet.

Kathy Chapman, nearby resident and DNAinfo employee, was cooking dinner in her home when her daughter told her that somebody was yelling for police outside.

"I went out to the front door and listened outside and heard pounding on the doors over in that direction," Chapman said. "I came back in and looked out the kitchen window and saw fire trucks come down and people come out of the courtyard to flag the fire trucks."

From her kitchen Chapman said she saw police arrive within 10 to 15 minutes of the shooting, and one victim who walked out of the building looking "shell-shocked."

"He yelled for a friend and his friend said 'I can’t, you gotta help me,'" Chapman said. Meanwhile, a woman was out on one of the apartment's balconies screaming "in hysterics," Chapman said.

Chapman has lived in the neighborhood for nearly 20 years, and though she has noticed suspicious activity here recently, has always deemed the area safe. But tonight's shooting down her block definitely left her feeling "nervous."

"I felt bad for my daughter because she was kind of freaked out," Chapman said. "She's 10 years old so she's a little spooked."

Chicago Police stand under the 2nd floor window (light on) where detectives were just seen at Belle Plaine and Damen pic.twitter.com/6PVmnSreSb 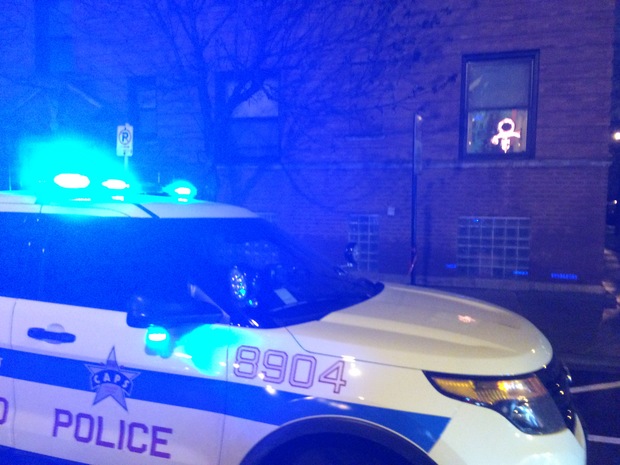