For 8th-Grader, Whitewashed Cabrini Mural Was Much More Than Public Art

NEAR NORTH SIDE — When Collin Powdermaker visited the "All of Mankind" mural on a snowy day last winter with his mother, Flo, he was surprised no one else was there to see it.

"He asked me where everyone was — we were the only ones standing at the mural. I asked him what he meant, and he said, 'Mom, this is history. There should be crowds taking this in,'" his mother recalls him saying in front of the mural, which covered the facade of a historic Cabrini-Green church, Northside Stranger's Home Church, 617 W. Evergreen Ave.

Collin chose the famous-yet-faded mural as the subject for his award-winning history project last year, he dubbed "Praying for a Mural," at Nettelhorst Elementary School, 3252 N. Broadway, because of its uncertain future. Since the Cabrini-Green housing projects were torn down, the area that includes the church has undergone a lot of changes.  The small church, recognizable from the street for the sprawling mural, is no longer the community hub it once was.

The 14-year-old is among many Chicagoans who have felt moved by William Walker's famous mural, which recently was whitewashed away to the dismay of preservationists, community leaders and admirers like Collin.

Collin, whose family lives in Irving Park, said he was in his social studies class when his teacher called him up to the front of the class to tell him what happened. It was the same teacher who had advised him on the project, which earned Collin prizes at the city and state level.

"I thought, 'Wow, they actually did do it,'" Collin said. "It's really sad. Now that it's destroyed, I've realized it's not coming back." 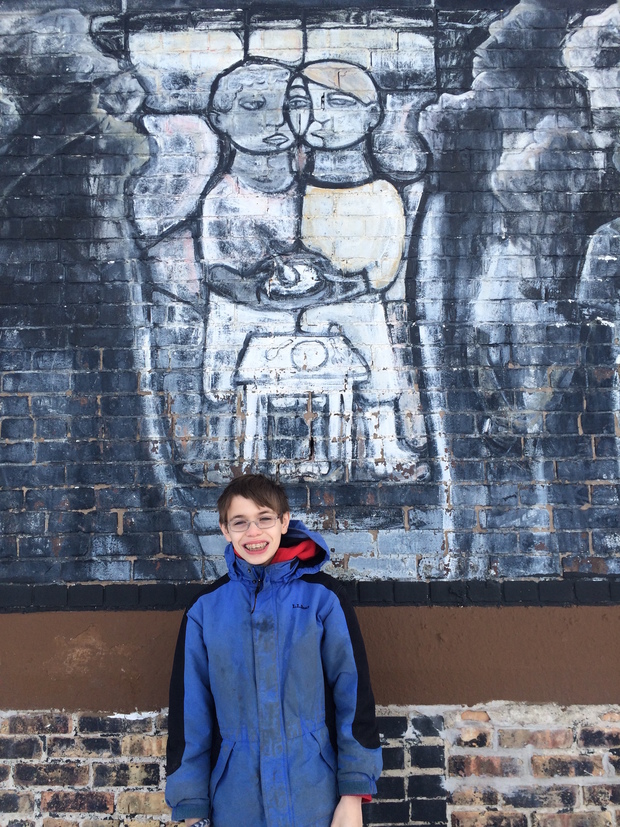 He said he had done so much research on Walker for more than four months that he "could've told his story without looking at anything to remind [him.]"

"I woke up, ate breakfast and started working on this and worked on it all day. Then I went to sleep and we did again the next day," he said.

For Collin, the mural was so much more than public art — it was a product of Walker's powerful journey.

"What I found interesting was the way [Walker] wanted to do art was not for fame; it was to help people who were racially segregated," said Collin.

Collin recalled a story he discovered through his research in which Walker visited a plantation to take pictures. When he got there, a woman picking cotton asked him why he was there, and it was that moment in which Walker decided he wanted to fight for social equality through his art, Collin said.

"That's one of the things that sticks with me. What would've happened if he never went to that plantation? Would any of his art be here? Would that art movement be here? I keep thinking about it," he said.

Annie Thomas, the daughter of the church's founding pastor, told DNAinfo Chicago that the church had been fighting to preserve the mural for years, but ultimately no one was willing to pay the hefty price to restore it or move it to another location. Meanwhile, the church was "drowning in debt" and was desperately trying to sell the property.

Now, the church is on the brink of selling the property to someone who wants to convert it into a single-family home.

Collin, along with many other advocates, believes the mural should've been saved. He said he would've loved to see the bricks go to members of the community who cherished the mural.

Collin's mother recalls another poignant moment when she took her son to the mural on that snowy day.

"As we were leaving, he looked at the "For Sale" sign and asked me if we could buy the church, to save the mural for everyone," she said.

It remains to be seen if the mural can be saved, though it does not seem likely. Jon Pounds, emeritus executive director for the Chicago Public Art Group, who has long fought to preserve the mural, said painting over it made it "significantly more complicated" to uncover.

The "All of Mankind" mural was Walker's oldest surviving mural, according to a 2011 WBEZ report. Some of his other pieces include "Wall of Respect," a mural that covered a commercial building at 43rd Street and Langley Avenue before the building burned down in 1971, as well as "Wall of Daydreaming and Man's Inhumanity to Man," which covers a store at 47th Street and Calumet Avenue.