Church to Public Upset Over Lost Mural: Where Were You in Fight To Keep It? 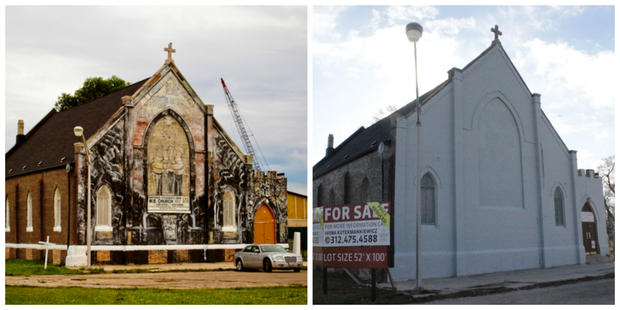 NEAR NORTH SIDE — When news broke of a famous mural being painted over at a Cabrini-Green church, residents in the Near North Side community and beyond were devastated, calling the loss everything from "tragic" to "totally unacceptable."

But Annie Thomas, the daughter of the former founding pastor of North Side Stranger's Home Missionary Baptist Church, 617 W. Evergreen Ave., has a message for everyone: Where were you the last five years?

"Nobody could help, and now they want to know why it's gone," said Thomas.

She said it was "completely the church's decision" to whitewash the mural, which was painted in 1972 by William Walker, known for pioneering the mural movement in Chicago.

The church went up for sale five years ago. Ever since then, Thomas and the rest of the church community have been desperately trying to sell it. The church has been suffering financially since the Cabrini-Green housing projects were torn down. Today, only about 10 people come to services on any given Sunday, and they're usually all related, Thomas said.

"Believe me, we can't afford to even pay our monthly bills," Thomas said. "This place is raggedy, old, and it's falling apart."

That includes the "All of Mankind" mural, which Thomas said was in "really bad shape" before it was whitewashed away. The bricks were starting to fall apart and crumble, causing a safety hazard. Some people in the community considered the battered mural an "eyesore," she said.

"They walk past it and they don't know it was still a church. They say, 'I thought this old building was torn down. It looks deserted,''' she said.

Still, Thomas said church members tried "everything they could" to restore the mural, and even explored moving it to another location. They asked for help from the Chicago Public Art Group and local community leaders, including Ald. Walter Burnett Jr. (27th) — but it was always too costly to get a substantiative repair.

Meanwhile, the church was "drowning in debt" and needed a buyer, Thomas said. None of the potential buyers was willing to restore the mural or move it. Community leaders, including Burnett, have long said that keeping the mural was non-negotiable for any new owner, which Thomas said prohibited sales over the years.

"We were trapped on a lonely island," Thomas said.

But Burnett said the community should've been involved in the decision, adding that he was "very, very, very disappointed" by the church's action.

"I think it was a ploy to hurry up and sell the property," he said. "I understand the family wanted their money, but it would've been better to speak with the community about it. That mural means a lot to a lot of people."

Thomas and another church board member, who declined to be named, disputed the notion that the mural was painted over to attract a buyer because they already have a contract with a potential buyer.

The church is on the brink of selling the property to a private individual who is considering converting the church into a single-family home. Thomas and others familiar with the deal told DNAinfo Chicago that the property is under contract. Neither the new owner nor the real estate agent handling the sale could not be reached for comment.

According to advocates and Burnett, it would be very difficult — though not impossible — for the developer to tear down the church altogether, which was built in 1901. That's because the land is tied to the CHA Redevelopment Plan, which includes replacing or redeveloping subsidized housing that was lost when the Cabrini-Green housing projects were torn down.

Yet Burnett expressed some skepticism, saying, "They painted over it to tear it down."

Thomas insisted that the new owner did not request that the mural be painted over. She said it was the church's sole decision.

The church "was here to help young people in the projects. My dad let them come in and get warm on their way to school. It was a better time then," she said.

"We deserve a chance to move on. We were sitting in a cold church without enough [money] to pay the bills."

Chance Stopped By Police, So He Records It Live On Instagram