CHICAGO — There's a wide disparity between how African American, white and Hispanic Chicagoans view the Chicago Police Department in the wake of the Laquan McDonald police shooting video and the protests that followed its release, new poll results show.

The gulf between Chicago's voters on Rahm Emanuel is less severe, although the mayor is facing an overall disapproval rating of 56 percent, according to the Aldertrack/DNAinfo/WGN Radio poll, which surveyed about 1,100 Cook County voters on Tuesday, the day before Emanuel apologized to the city amid calls for his resignation.

RELATED: Poll Suggests Rahm Would Have Lost Election If Laquan Video Got Out Earlier

According to the data, compiled by North Carolina-based Public Policy Polling, 62 percent of black Chicago voters now disapprove of the job the Chicago Police Department is doing. Just 34 percent approve.

Overall, 51 percent of Chicago voters polled disapprove of the job the Police Department is doing, compared to 46 who approve. The remainder were unsure.

As for the embattled mayor, more than half (53 percent) of black voters in Chicago disapprove of how Emanuel is doing his job. That's compared to 67 percent of Hispanic voters and 56 percent of white voters in the city, according to the data. 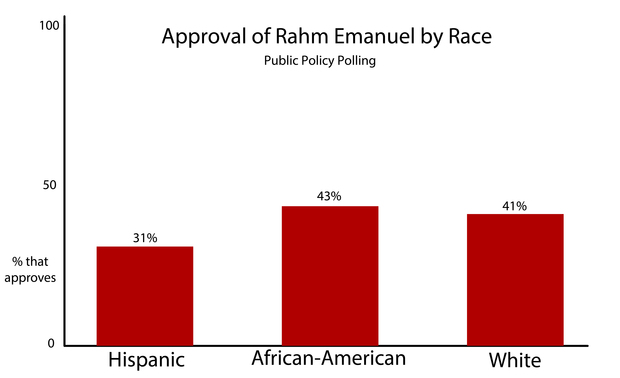 Emanuel's media office declined to comment on the poll.

The results show a wide disconnect between Hispanic voters' opinions on the mayor and the Police Department, which is under siege and the subject of a federal probe since the release of dashcam video showing a white officer fatally shooting 17-year-old Laquan McDonald, who was black.

The disconnect did not surprise aldermen representing the city's Latino communities.

"The communities we live in are working-class communities that depend on the cops,” said Ald. Ricardo Munoz (22nd). “People don't want the thugs on the corner or dealers running open drug markets, and they depend on the police to keep them safe.”

Ald. George Cardenas (12th), a member of the City Council's Latino Caucus, said Hispanic communities' relationship with the police differs from that of African-American communities, which factors into the vast difference in police support.

Ald. Willie Cochran (20th), a former Chicago police officer, said the poll numbers show Emanuel has a tough job ahead to improve his standing in the black community — and citywide for that matter — if he hopes to rebuild trust some Chicagoans have lost in him as mayor.

“That poll reinforced the fact that the mayor has a lot more work to do to improve his image with the community at large, and not just the black community,” Cochran said. “This is not just about black people as [far as] the mayor is concerned. A lot of people of all classes are upset with the mayor. Medical students and doctors were laying down in front of City Hall today. This isn’t a race issue. This is a trust issue.”

Cochran said the low approval rating for the Police Department in the African- American community isn’t shocking for “an agency not put in a welcoming light in some neighborhoods.”

Munoz said Emanuel isn’t viewed as warmly by Latinos as his predecessor, Mayor Richard M. Daley, because the former mayor spent more time in the neighborhoods.

“There’s a huge difference in how Rahm and Rich govern. Rich was a neighborhood kind of guy and he understood neighborhoods,” Munoz said. “Rahm tends to govern from City Hall, and that’s a challenge he’ll have to overcome, not just in Latino communities but all over the city.”

Cardenas said Emanuel's disapproval in the Hispanic community is fueled by a lack of communication and engagement.

"Daley did things differently and had more direct communication with people in Hispanic communities,” Cardenas said. “I don’t think it’s irreparable. Emanuel will have to keep fighting for their approval.”

The poll was taken amid rallies calling for Emanuel and Cook County State's Attorney Anita Alvarez to resign in the wake of the Laquan shooting controversy.

Chicago voters viewed Alvarez in a more positive light than Emanuel. The prosecutor had 54 percent approval among Hispanic voters, 47 percent among white voters and 30 percent among African Americans.

RESULTS FROM CITY OF CHICAGO VOTERS:

(Asked of April 2015 election voters) If you’d seen the video of the shooting of Laquan McDonald before the election for Mayor last April, would it have changed your vote for Mayor, or not?

If the primary election for Cook County State Attorney were today, and the candidates were Anita Alvarez, Kim Foxx, and Donna More, who would you vote for?

If the primary election for Cook County State Attorney were today, would you vote to re-elect Anita Alvarez, or do you think it’s time for someone new?