CHICAGO — Hundreds of Chicagoans gathered in Daley Plaza Wednesday to demand Mayor Rahm Emanuel's resignation, including polarizing 16-year-old protester Lamon Reccord, who was briefly taken into custody by police at the scene.

The rally, part of an organized "citywide walkout" and paired with a campaign on social media centering on the hashtag "#ResignRahm," aimed to highlight participants' dissatisfaction with the mayor and his handling of the Laquan McDonald case and other recent controversies involving City Hall and the Chicago Police Department.

"We’re the 'City of Big Shoulders' and Rahm’s shoulders are not big enough," the protest's organizer, Rousemary Vega, said Tuesday of the rally's intended message. "We want to show him tomorrow."

At one point during the rally, Reccord, whose protest strategy of staring down police officers garnered national attention during protests for the McDonald case, was taken into police custody. He was later released without being arrested.

As marchers progressed down Dearborn Street, Reccord was handcuffed and detained in a police van for hitting an officer, according to police on the scene. Amid chants to "let him go," Reccord was uncuffed and released.

Demonstrators continued to speak with bullhorns from Clark and Washington streets just before 1 p.m. calling for change in Chicago and Emanuel's resignation.

Got boxed out but that's Rousemary Vega talking. "You guys are part of history." pic.twitter.com/w3HKY7kyxZ

They later protested outside the Chicago Board of Trade Building, shut down the intersection of Congress Parkway and Wells Street, and greeted holiday shoppers on State Street with chants of "16 shots / 13 months," referring to the time it took the city to release the video of McDonald's death.

Leaving Board of Trade pic.twitter.com/2aANOKYkqU

Under the stock exchange. pic.twitter.com/XHWgFHV8u0

Among the onlookers were inmates at Metropolitan Correctional Center, 71 W. Van Buren St., who were seen leaning against windows at the federal prison high above the street.

The march paused briefly at Michigan and Randolph, where protesters gathered in a circle, before moving north on Michigan Avenue, shutting down the downtown artery and heading toward the Mag Mile shopping district.

The entrance to Lake Shore Drive is completely shut down, by the cops #ResignRahm #byeAnita pic.twitter.com/jiQ6DFfvlc

Some protesters entered downtown stores, while police barred them from entering others, including Water Tower Place, around 3 p.m. A line of officers also blocked marchers from going up the Lake Shore Drive ramp. The march was diverted west on Division and continued north up Dearborn in the Gold Coast before ending at The Archbishop's Residence, 1555 N. State St.

"These are the richest people in town, who have no problem calling down to City Hall," one protester told the group. "Until we get justice, until we get resources, we're gonna come up to the rich parts of the city until they don't want to see us again." 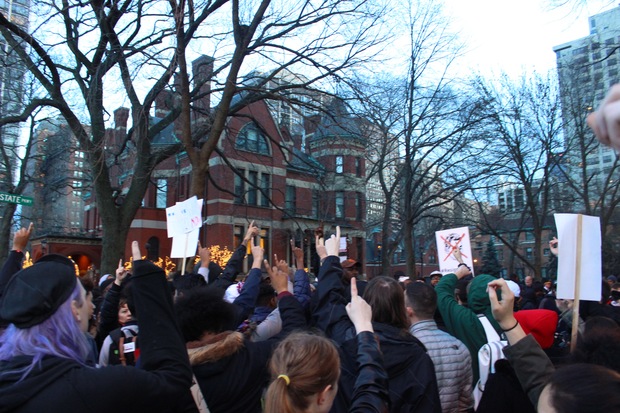 Two women were reportedly detained on Division Street for allegedly assaulting a police officer, though they were later released, according to activists. Chicago Police could not confirm any arrests from Wednesday's protest.

Many of the protesters were young people, including scores of students who walked out of school to speak out on perceived injustice. Two of those students, Nathan Morgan-Kitch and Rigoberto Flores, skipped class at Ogden International School despite knowing they could be punished.

"That could've been us,"  said Morgan-Kitch, 16, of Laquan McDonald. Flores added that "we're taking risk of suspension but that's what we have to do."

Sabira Cross, 16, on why she skipped class to protest today. pic.twitter.com/L68XwPs7rl

Earlier Wednesday, Emanuel delivered remarks that included an apology to the people of Chicago for the city's handling of the McDonald case.

"I'm the mayor. I own it. I take responsibility for what happened because it happened on my watch," he said, at times his voice cracking with emotion.

According to a recent poll, 51 percent of Chicagoans surveyed said they thought Emanuel should step down from his post as the mayor of Chicago. Vega said that Wednesday's protest was the powerful and diverse demonstration she's seen since the McDonald video was released.

Ja'Mal Green, 20, also organized the event and said the protests will continue daily — perhaps even at Emanuel's Ravenswood home — until Emanuel and Alvarez resign. Green said Wednesday's turnout was "amazing" but not more than expected.

About to "shut down the mile." Might happen again tmrw. pic.twitter.com/aPvnD38W7u

The protesters from above: pic.twitter.com/zHvKgAbzwG

What Happened to the Burger King Surveillance Video of Laquan Shooting?