WASHINGTON PARK — Ronald Johnson had a gun in his hand that had been used in a previous shooting when he was shot by Chicago Police Officer George Hernandez, the Cook County State's Attorney's office announced Monday.

The officer who shot and killed Ronald "Ronnieman" Johnson — the week before Laquan McDonald was shot 16 times — will not be charged criminally for the shooting.

Cook County State's Attorney Anita Alvarez, who has been under tremendous public pressure in light of the McDonald case, held a news conference Monday to describe in detail what happened on Oct. 12, 2014, when Officer George Hernandez shot and killed Johnson in the 5300 block of South King Drive.

Prosecutors played dashcam video of the shooting during the news conference. It was the second time in a month that authorities released a video of a Chicago Police officer shooting and killing a black man amid pressure from family members, lawyers, journalists and activists.

Johnson's family on Monday disputed the video and said they planned to sue the Chicago Police Department.

Alvarez said Johnson was leaving a party about 12:30 a.m. on Oct. 12, 2014, when the car he was in with three other men was shot at multiple times. No one was injured, and the four men drove a short distance before returning to the scene of the shooting. According to Alvarez, one of the men in the car told police he heard Johnson cock a gun.

Multiple residents reported the shooting to 911, and multiple police cars were sent to the area, Alvarez said.

As police talked to one of the men with Johnson, other officers spotted Johnson carrying a gun and ordered him to drop it, Alvarez continued. Still holding the gun, Johnson allegedly ran from officers, heading down 53rd Street before turning toward King Drive.

That's where "he encountered the original two officers who were on the scene," Alvarez said. Both officers saw Johnson holding a gun and pulled their own weapons while demanding Johnson drop his, Alvarez added.

According to prosecutors, Johnson indicated he would comply, and one of the police officers holstered his gun to handcuff Johnson. New officers arriving on the scene allegedly shouted that Johnson had a gun, and Johnson was able to run east across King Drive.

Officer Hernandez, who arrived in an unmarked vehicle, saw Johnson run "behind their car toward another police unit," Alvarez said. Hernandez fired five shots toward Johnson, striking him two times.

"The legal question in this case is not whether Officer Hernandez shot Mr. Johnson and killed him," Alvarez said. "Those facts are not in dispute. The legal questions are: No. 1, is there sufficient evidence that exists to meet the legal requirement for a burden of proof in this case? And No. 2, ... did Officer Hernandez act reasonably under the law?" 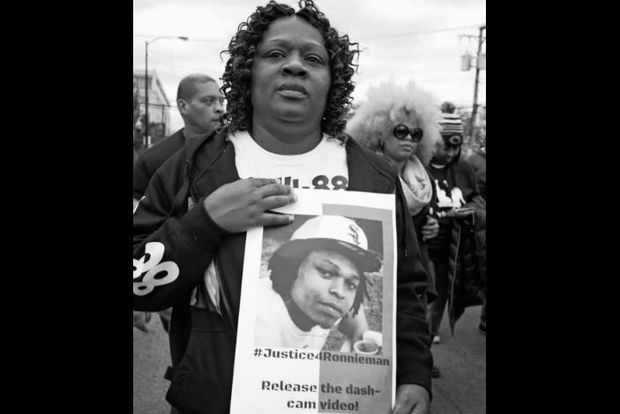 Dorothy Holmes holds a photo of her son Ronald "Ronnieman" Johnson, who was shot by police in 2014. [Facebook]

The video was analyzed by experts. Alvarez admitted the footage isn't "Hollywood quality," but said her office is confident Johnson was carrying a weapon. She said the men in the vehicle with Johnson, who attended the party with him, also confirmed he was carrying a gun.

"These dashcam videos ... they’re not Hollywood-quality videos," Alvarez said. "They’re grainy, they're dark. It's blurry. It happened so fast."

To make sense of the sometimes blurry shots, Alvarez said she enlisted experts who slowed down each frame and compiled second-by-second stills.

Prosecutors say #RonaldJohnson was armed with a 9mm gun with extended clip with 12 live rounds pic.twitter.com/sEqNIZkLd6

Like the dashcam footage of Laquan McDonald's shooting, the Ronald Johnson video has no audio. The audio heard in the video above was police-scanner traffic added by the State's Attorney's office. Alvarez called the lack of audio in the dashcam videos "frustrating" and said the Chicago Police Department needs to answer for that.

"I don’t know why there’s no audio. There should be audio. There’s supposed to be audio," she said. "But whether it’s malfunctioning, or officers are physically turning them off when they get in that squad car ... that’s something that I believe the police department has to address."

When asked why it took more than a year for her office to come forward with details of the case, Alvarez pointed to the Independent Police Review Authority, the agency tasked with investigating police-involved shootings. The agency has seen major shakeups since the McDonald case.

"We have to wait for IPRA to bring us evidence," Alvarez said, adding that the agency has taken months to send her office "piecemeal" bits of evidence in this case. "They are the ones that go out and interview these people, find these people, get the evidence.

"I know for a fact that back in April, my office supplied two names of people that Mr. Johnson’s family had asked to be interviewed. April. They just interviewed them a week and a half ago. I do have some concerns because I personally would like to get information much sooner. I would personally like to have wrapped this case up … much earlier. But I am bound by [IPRA]."

After the shooting, police said Johnson allegedly pointed a gun in their direction before one of the officers opened fire, striking him multiple times. The video shows Johnson running away from pursuing officers and toward a park, where Alvarez said more police officers were located.

Hernandez fired six shots at Johnson's back, according to a wrongful death complaint filed on Holmes's behalf on Oct. 29, 2014, a few weeks after the shooting. The claim by police that Johnson had pointed a weapon at police were "completely misleading and false," the complaint read. Alvarez on Monday said the officer fired five shots.

Since her son was killed, Johnson's mother Dorothy Holmes has said publicly that she watched the dashcam footage, and it didn't show her son carrying a weapon.

Alvarez said her office and the FBI reviewed multiple videos of the incident, and the FBI decided not to pursue the case further.

"It's very important for me to clear my son's name, because [police] went on TV that night and lied in front of a million people," Holmes said at a Dec. 1 news conference calling for the video's release.

Mayor Rahm Emanuel released a statement Monday: "A life was lost here, and that is a tragedy that can’t be taken lightly no matter the circumstance. That’s why independent investigations are so crucial in these cases. Now, as our independent police review authority resumes its investigation to determine whether the shooting was consistent with CPD’s policy, we must also ask ourselves if the existing policies on the use of deadly force are the right ones and if the training we provide to officers to make split-second decisions in life or death situations is sufficient.”

Meme About Chicago Police Gets Downstate Chief In Hot Water