ALBANY PARK — Teenage boys have a reputation for wolfing down anything and everything in sight, but 17-year-old David Smith often goes the entire day without eating.

Such is the state of food, he said, served by the cafeteria at Roosevelt High School, 3436 W. Wilson Ave.

So students would rather starve than eat free food?

Students told DNAinfo that the hamburger meat is raw, the chicken patties taste like fish and the fruit cups are frozen.

"They should use actual real cheese," Smith said. 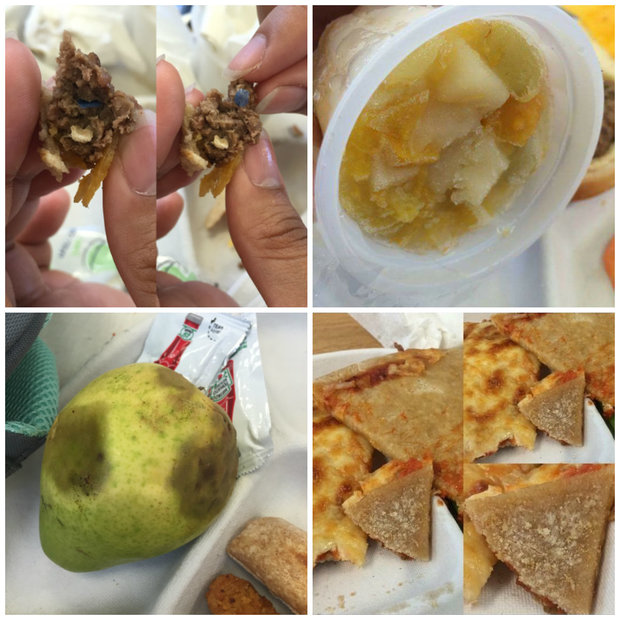 The teens are among a group of Roosevelt students who organized a school-wide cafeteria boycott on Monday as part of the "The School Lunch Project: Culinary Denial," which was developed as a civics class lesson.

The goal of the boycott: To get the attention of food service giant Aramark, which won the $100 million Chicago Pubic Schools contract in 2013, renewable annually for four years.

The boycott hits Aramark directly in its pocketbook: As part of the contract — awarded under circumstances the Office of the Inspector General later found "questionable" — Aramark receives money for every lunch it serves.

Back in 2013, the switch to Aramark was lauded by school lunch advocates, who expected the company to deliver fresh produce, organic greens and antibiotic-free poultry.

The School Lunch Project says that is not the case.

A website created by the civics students features photos of some of the more egregious school lunch examples — bruised fruit, unidentified blue objects in a burger and skimpy servings — from several CPS schools.

These images are contrasted with those presented by Aramark, depicting mouth-watering, appealing options. 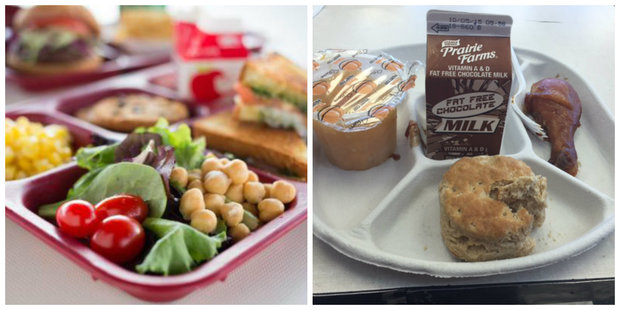 "It's the same company that provides food for prisons. Are they saying we're prisoners?" asked Noemi Alanis, 17.

Samantha White, 16, said she was shocked to learn "how much our food is processed. We just knew it didn't taste right."

Though White said she often brings her own lunch to school — noodles or a salad — other students, including Smith, said they don't have time in the morning to pack something to eat later in the day.

Also as part of the project, the students conducted a survey of their peers, asking them to rank the cafeteria's food on a scale of 1 to 10, with 1 being the worst and 10 the best. Eighty-six percent scored the food a five or below.

On Tuesday, students and civics teacher Tim Meegan will meet with representatives from CPS and Aramark to outline their demands.

Emily Bittner, CPS spokeswoman, responded to DNAinfo via email: “CPS has a school lunch program that provides healthy, nutritious lunches at no cost to students throughout the district. Not only does CPS exceed federal nutrition guidelines, we also enjoy working with student and parent groups to test our meals and develop menus.

"CPS is happy to work with the students of Roosevelt to hear their concerns and address their needs, and look forward to meeting with them this week," Bittner said.

Aramark is reportedly aware of the complaints and told WBEZ radio it is investigating.

"Something that's good, not repetitive," said White. "I'm tired of pizza, because that's all we get."

Other school systems, including a consortium of Catholic schools in Chicago, have cracked the nut of how to provide large numbers of students with tasty food, efficiently and cost-effectively.

Staff from the Dill Pickle Co-op in Logan Square brought snacks to Roosevelt on Monday to tide students over during the boycott — organic apples, fair trade bananas, yogurt and mini-chocolate bars. They acknowledged the Dill Pickle couldn't service CPS, but "our suppliers could," said Jessica Dickerson.

"It wouldn't be as cheap, but entities like us operate without a profit," she said. "Somebody doesn't have to make a profit."

Meegan said breaking the Aramark contract is an unrealistic goal, but bringing the company to the table is a good first step for students, who are also lobbying for vending machines inside the school and the opportunity for upperclassmen to eat off-campus during lunch.

"The main lesson is 'How do we force change? What are the tactics and strategies for people who have no voice?'" Meegan said. "The more active and capable they become at organizing" the better citizens his students will be as adults.

The message has sunk in with the teens.

"Once one person speaks up, everybody can come together and make a difference," said civics student White. "This is about us taking a stand — we have to stand up for ourselves."