Little Free Libraries Are a Thing, Depending on Where You Live

LINCOLN SQUARE — We have a question to add to those "What neighborhood should you live in?" quizzes: Have you heard of Little Free Library?

If yes, you're a great fit for Lincoln Square, North Center, Edgewater or Rogers Park. That's where you'll find half of the city's approximately 40 registered do-it-yourself book repositories. Beverly/Mount Greenwood is a South Side stronghold.

A quick summary for the uninitiated: The Little Free "take-a-book, return-a-book" movement was started in 2009 by Wisconsinite Todd Bol as a simple tribute to his mom, a former schoolteacher.

Bol built a miniature wooden schoolhouse, filled it with free books, and faster than you can say "grassroots phenomenon" the idea caught fire globally as a means of simultaneously promoting literacy and community. There are now more than 25,000 little libraries worldwide.

The concept is simple: A "host" erects some sort of structure to contain donated books, sets it up in a public place — in Chicago, typically the parkway — and people take or supply as many books as they like. No due dates. No fines. No "hold" lists. No shushing. 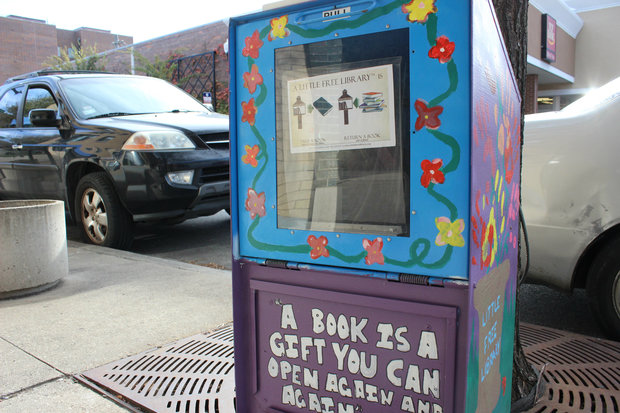 "It's not like we don't have [Sulzer] library two blocks away," she said. "This is just like, 'Oh,' when you're walking by with your stroller or dog. It asks nothing of you."

Like most Little Free Libraries, the 47th Ward's collection consists of an ever-rotating mishmash of high-brow and low-brow novels, children's books, hard covers and paperbacks. Some are new, but even better are the pay-it-forward used titles, Salk said.

"These books are touching so many lives," she said of titles that pass from hand to hand. "So many that we've all read, we hope whoever reads them next has the same enchanted feeling."

We ran across Rachel Puschmann combing through the ward's "stacks" with her two children.

"It's a creative way to spark their interest in reading," she said, calling it "another avenue" on top of school and the public library.

Salk said she was inspired to spearhead the ward office library after learning about the movement from Nate Hutcheson, who hosts one of the area's first Little Free Libraries outside his family's two-flat in the 2700 block of West Giddings Street.

Hutcheson likened the library to a birdhouse, attracting a never-ending parade of visitors.

"Most of our social life is in the neighborhood. It's just a fun way to talk to people, you just start chatting," Hutcheson said. "It's a reason for people to stop — to walk along and find a pile of books."

Hutcheson has become a sort of Little Free Johnny Appleseed, planting the idea for libraries beyond Lincoln Square.

Partnering with the community website Nextdoor and the North River Commission, Hutcheson is working to bring a half-dozen libraries to neighborhoods west of the Chicago River — Irving Park, North Park, Albany Park and Ravenswood Manor — where only a handful are currently registered with littlefreelibrary.org. 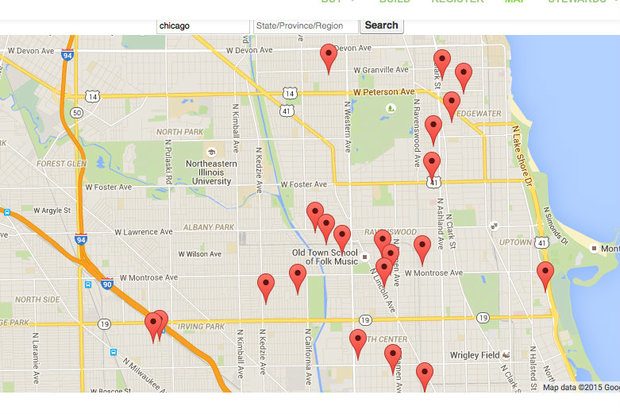 A large number of Chicago's Little Free Libraries are clustered in a handful of North Side neighborhoods. To search for all of the city's registered libraries, click here. [Little Free Library]

Potential hosts were asked to signal their interest on Nextdoor — a site similar to EveryBlock, yet different in that users have to provide a real name and can only view and comment on posts related to their actual block. People who garnered the most support from neighbors were chosen to receive a donated library, set to be installed by the end of the month.

Colette Adams of Albany Park nabbed a library for her block via the Nextdoor contest.

"It was funny, I was about to make one myself," Adams said. "I've got so many books and know so many people with books. I have hundreds — I've been in a book club for 20 years."

Her goal is to make her street more welcoming, she said.

"We're not a wealthy block, we're a humble block," Adams said. "I thought this would make it more cheery, more neighborly." 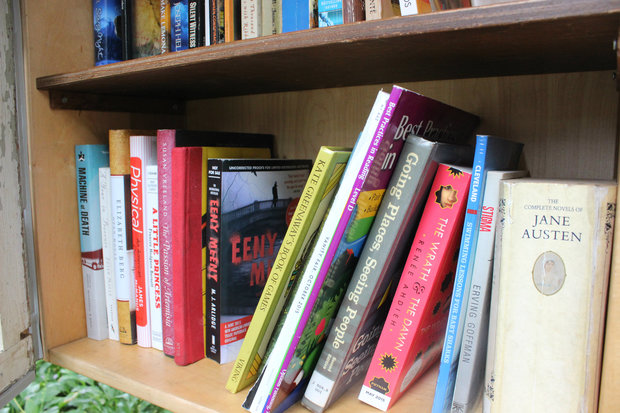 While hosts aren't solely responsible for restocking their libraries — remember, the motto is "take a book, return a book" — many do wind up playing the role of curator, weeding out material that's either inappropriate or should've been tossed in the recycling bin.

Then there was the time someone donated a "how-to book of sex positions," he recalled.

"It was funny, but not the kind of thing you'd want the kids to grab."

When it comes to designing a Little Free Library box, there are no written rules. That said, most fall into one of two camps: a) classically rustic or b) whimsy gone wild.

In the latter category are libraries shaped like R2-D2 from "Star Wars," "Peanuts" characters riding a school bus and the TARDIS from "Doctor Who." There's even Little Free Library carved out of a giant cedar tree.

The vast majority of libraries we've come across in Chicago belong to the first group. Scores of hosts have followed founder Bol's lead and built their library to resemble a wooden house featuring a peaked roof, a hinged door (often with a window) and shelves, and then attached the box to a post. Added individual artistic flourishes are the stuff of which Pinterest boards are made.

Hutcheson constructed his library from a cabinet drawer he bought at the Rebuilding Exchange and an old mailbox post his dad found in a ditch.

Hutcheson's father also supplied the door, which has a literary pedigree of sorts.

The late columnist and author Erma Bombeck once owned the property where Hutcheson's parents now live. Bombeck left a shed behind and Hutcheson's "door" is a window salvaged from that building.

Here's a gallery of some of Chicago's Little Free Libraries: 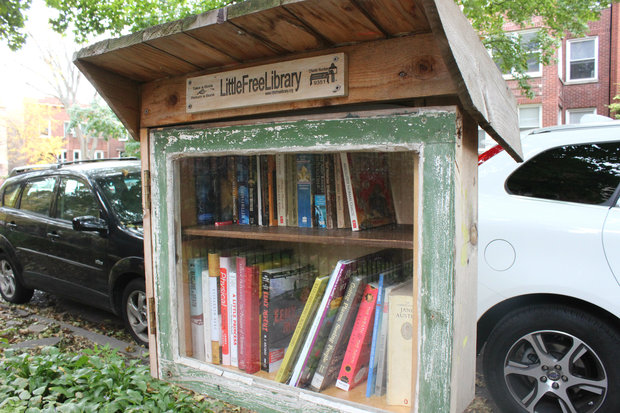 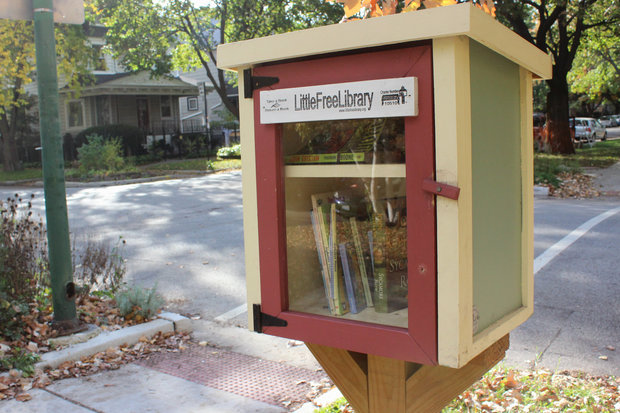 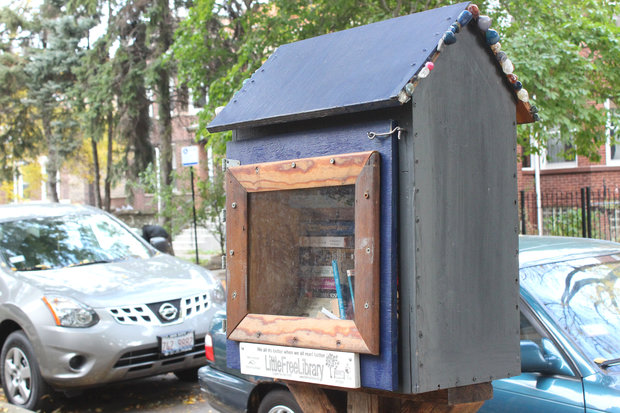 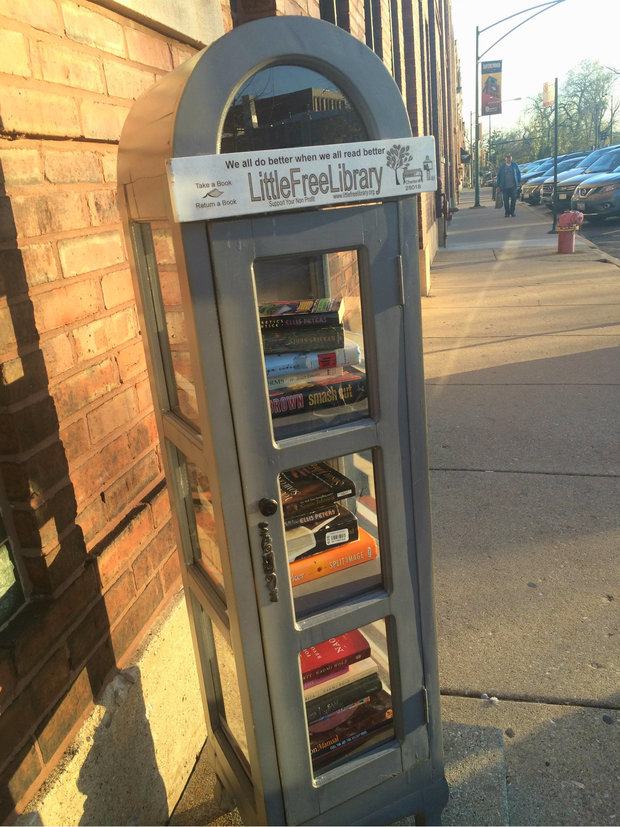 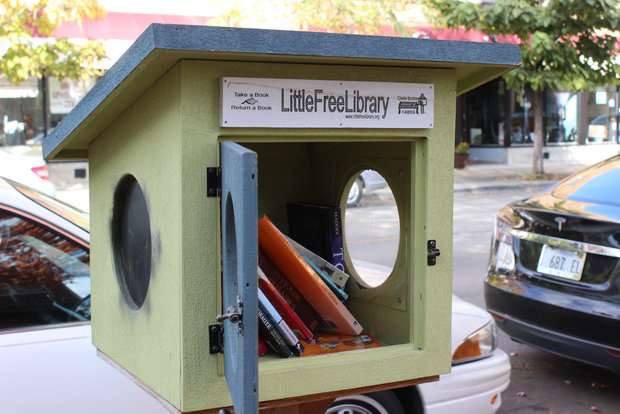 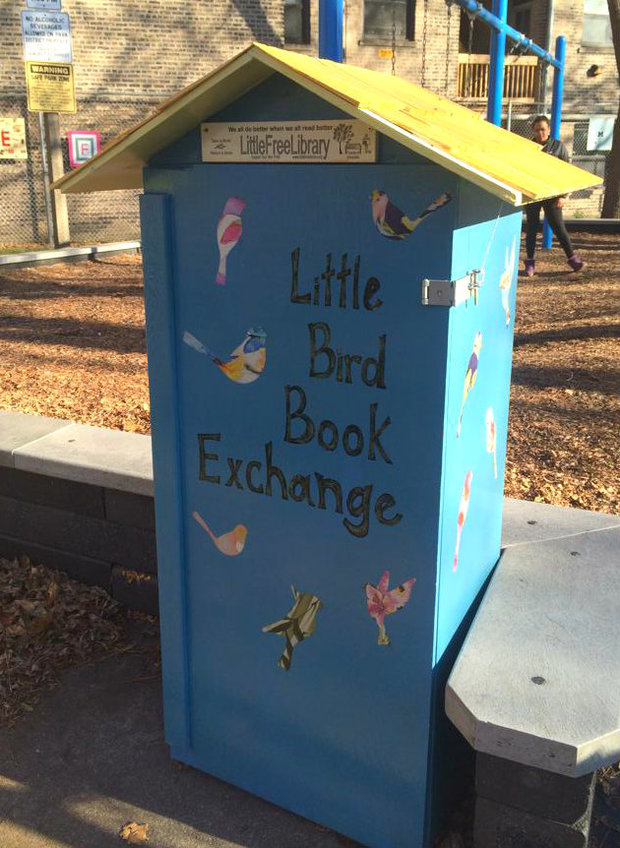 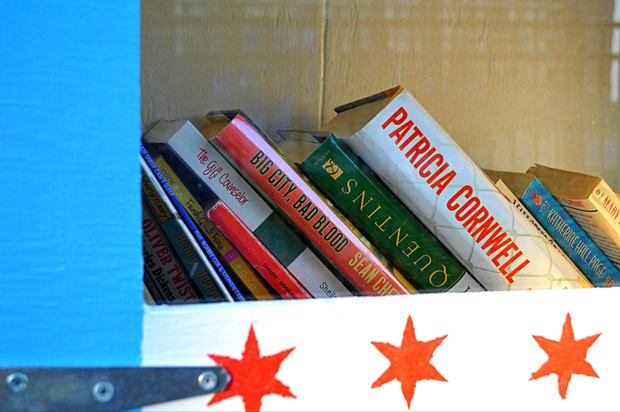 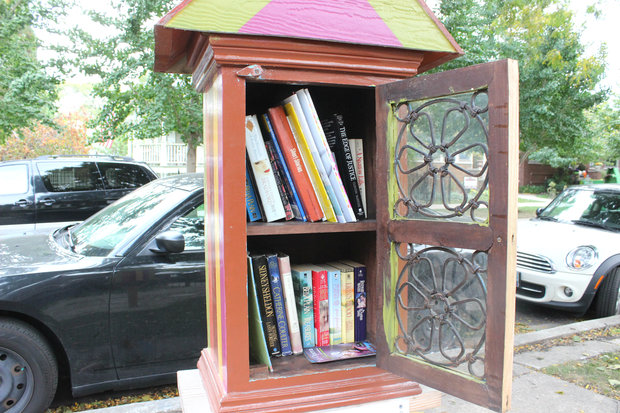 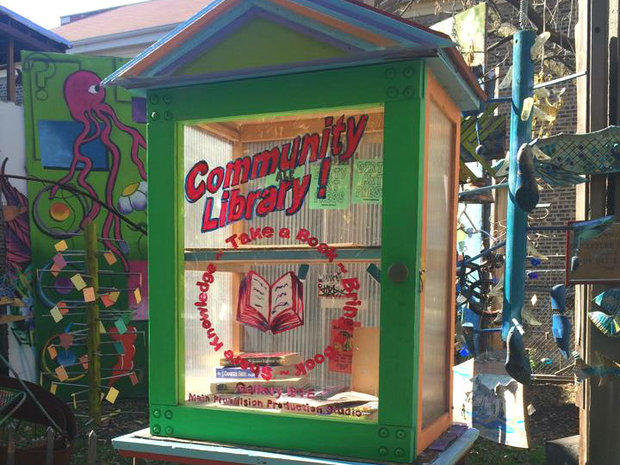