MAGGIE DALEY PARK — Dog lovers shut out of Maggie Daley Park still hope for a pooch-friendly path through the new Downtown playground, even if they have to make one themselves.

With the park district still holding firm on its dog ban for the park, 337 E. Randolph St., some neighbors are beginning to play by their own rules — and the park's security doesn't seem to mind.

"Many of us are ignoring the ban altogether, and I'm one of them," said Joan Pippin, who lives in a nearby condominium tower. "The security guards always come up and say 'No dogs allowed,' but once they recognize you they just wave."

The admission arrives about a week after new tennis courts opened at the far east end of Maggie Daley Park, in a spot formerly called Peanut Park. Bob O'Neill, head of the influential Grant Park Conservancy group, has negotiated all year on a compromise that would allow dogs to cut through the park on the sidewalk between the tennis courts and the Cancer Survivors Garden at Randolph and Field Boulevard.

But so far the park district still appears to be uncompromising: Along with the new courts are new signs saying dogs aren't allowed. 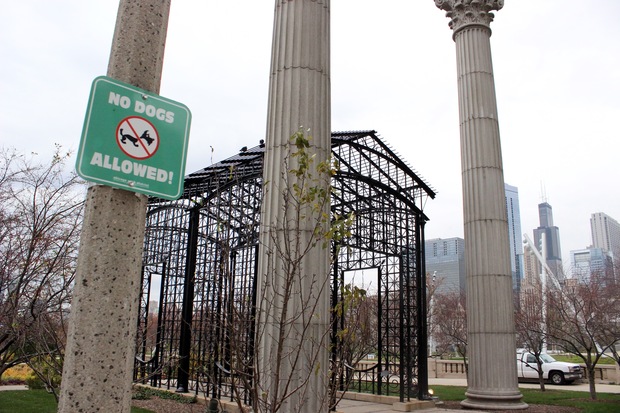 A new "no dogs allowed" sign by the Cancer Survivors' Garden. [DNAinfo/David Matthews]

"It's reasonable to have a pathway" through the park, O'Neill said. "I do think there needs to be some sort of compromise."

Compromise or not, nobody seems to be enforcing the ban anyway, Pippin said. That's because the park's security doesn't write tickets — police do — and park security doesn't want to call police on rogue leashed dogs. Pippin said she walks her dog through the garden regularly.

Jessica Maxey-Faulkner, a spokeswoman for the park district, said in an email that "there has been no change in [the park's] policy. The same ban is in effect," declining to comment further.

The ban has been a hot-button issue since it was announced late last year, a reversal of 2012 decision allowing dogs in the new Maggie Daley Park. Some neighbors view the ban as a broken promise that forces them and their dogs to Lower Columbus Drive or other detours instead of straight south through the park.

O'Neill said he's still having negotiations with the park district, but one reason they're lasting this long is because the park itself is still a work in progress. The tennis courts just opened, and a new restaurant planned for the southern end of the park still requires city approval.

"Part of the delay is getting the entire park open ... and look at traffic patterns and everything else," O'Neill said. "We have to make sure that this compromise works so that the park doesn’t get destroyed."