RAVENSWOOD — If you're a brewery and you've got rodents chewing through 50-pound bags of expensive grain, who you gonna call?

"If a brewer says they don't have rats, they're lying," said Bill Hurley, owner of Empirical, 1801 W. Foster Ave.

Rodents are attracted to the extremely high-quality grain that breweries stock by the truckload. To the rats, it's like a "giant block of cheese," Hurley said.

Empirical hired an exterminator to pay regular visits to the brewery, but still found itself throwing money out the window in the form of gnawed-on bags of barley.

Enter Tree House, which has moved 264 feral cats within Chicago and 130 in the suburbs, according to Jenny Schlueter, manager of Cats at Work.

She's placed cats in factories, barns, a hotel loading dock, behind restaurants and in backyards across the city.

"Rats can smell their predators," Schlueter explained. "Quite honestly, house cats will also keep rodents away."

Smart rats move along, she noted, and the "ones that don't get it" wind up being hunted. While some folks become squeamish at the thought of cats hunting rats, Schlueter said she finds it more humane than poison or traps — and not to mention it's part of the natural circle of life.

Though cats might seem like an unusual solution to a brewery's pest control problems, tabbies have been on rodent patrol at distilleries for centuries.

Among the best-known whiskered whisky guardians:

Towser the Mouser once prowled Scotland's Glenturret distillery (in operation since 1775). His estimated 28,899 lifetime mouse kills earned him a place in Guinness World Records.

Staff at the Jameson distillery are rumored to have paid their cats in milk and so loved a mouser named Smitty that they had him stuffed and mounted in the distillery's rafters.

In the digital age, distillery cats have their own Instagram page, where you're likely to find photos of Carlos and Jeffey, who rid New York's Kings County Distillery of a mouse invasion after Hurricane Sandy.

Brooklyn Brewery (R.I.P. Monster), Louisville's Apocalypse Brew Works and Chicago's own Pipeworks are among the craft breweries who've followed their distillery counterparts' lead. Apocalypse acquired its cats, Hiro and Saki, through a program in Kentucky that's similar to Cats at Work. 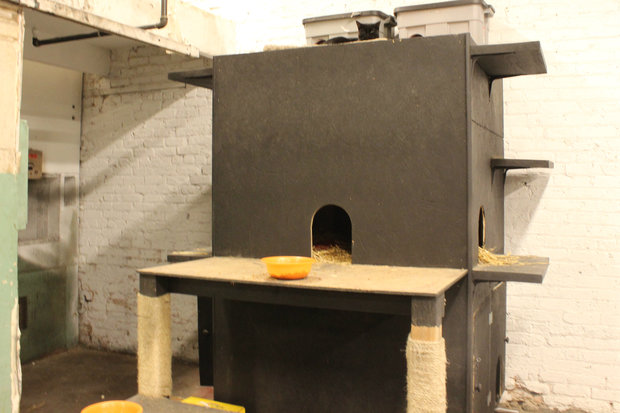 At Empirical, the brewery's Ghostbusters — the theme chosen in a naming contest that also included famous scientists and cartoon villains — made an immediate difference.

Since adopting their group of three males and one female (that would be Gozer, a black-haired beauty), the brewers haven't seen a single rodent.

"Just their presence keeps us safe," said Hurley. "They're the only reason we can store grain. We also didn't want to live with rodents."

Though photos and video of the cats' acclimation period show they were initially quite shy of their new caretakers, an affectionate bond has developed between the feral felines and the brewers.

The guys bought an array of toys for the cats, only to discover what the parent of every toddler quickly learns: They'd rather play with boxes. Eventually the brewers placed large cardboard mats at the foot of the cats' towering home and in return are treated to daily wrestling matches.

If this playful scene is at odds with the image most people have of "feral" cats, it's because there's a misperception that the term equates to "wild," Schlueter said.

"People assume they're going to be aggressive or attack them. That couldn't be further from the truth," she said.

"They're not wild animals. They're still domesticated cats, but they've been 'unsocialized,'" Schlueter said. "Their socialization is always changing. They can become quite friendly."

A warehouse like Empirical's is ideal for feral cats — kind of like a real indoor home but not so confining that it stresses the cats out, Schlueter said.

Noting that Tree House has struggled to convince men that cuddling up to kittens can still come across as macho, Schlueter is pleased with the way Empirical has embraced its colony.

"We're so grateful to them," she said. "They're good role models for guys."

Empirical's cats adjust to their new home. Feral cats are first placed in super-sized dog cages to keep them from bolting while they gradually get used to their caretakers. [Empirical Brewery]

A photo posted by Apocalypse Brew Works (@apocalypsebrewworks) on Jun 5, 2015 at 7:23am PDT