DOWNTOWN — A pair of developers with skyline-altering plans for South Michigan Avenue shared their visions Thursday to a room full of neighbors concerned the proposals might change the street too much.

New York-based JK Equities, which wants to build an 86-story Helmut Jahn-designed tower at 1000 S. Michigan Ave., and Chicago-based Oxford Capital Group, which proposes a 54-story high-rise nearby at 800 S. Michigan, both said they hope to restore balance to a city skyline they feel is top-heavy around the north end of Grant Park.

Their projects are the latest additions to a new slew of proposed skyscrapers poised to transform Downtown's southern end, with the cubic Jahn tower the tallest of them all. If built, Jahn's stacked cubes at 1000 S. Michigan would rise higher than all but four other buildings in the city. And unlike its taller peers in Chicago, Jahn's tower would feature an unparalleled 85th-floor roof deck for condo residents.

"We are complementing what is happening at the north end of the park," Philip Castillo, a partner at Jahn's architecture firm, said at Thursday's meeting, which was hosted by Ald. Will Burns (4th) at East-West University, 816 S. Michigan Ave.

Though the proposals are grand, they were met immediately with skepticism from neighbors concerned about the towers' impact on traffic, views from nearby buildings and the historic integrity of South Michigan Avenue's "street wall" they prefer to be less dense than the other parts of Downtown.

"We are not naive. We all knew that sooner or later this valuable property next to our building would be developed," said Greg Taylor, president of the condominium association governing a building at 910 S. Michigan Ave. "But frankly nobody expected an 86-story building." 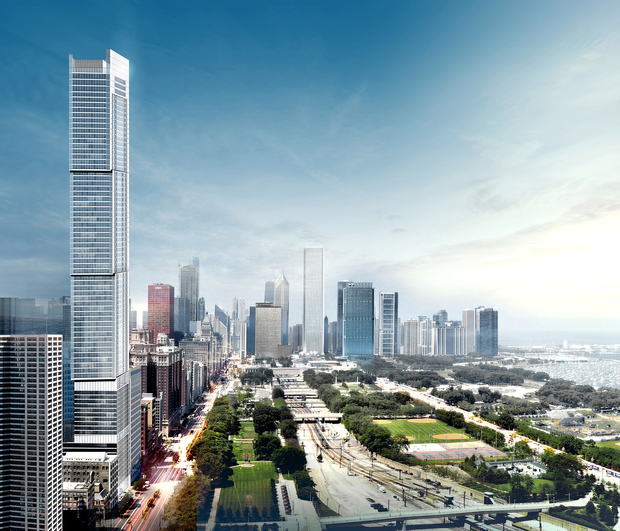 The Jahn tower would include 506 units, and in a departure from most recent Downtown developments, 358 of them would be condos. The project, a joint venture between JK and New York-based Time Equities, would also include 598 interior parking spaces and a renovation of a 111-year-old, eight-story office building next door at 1006 S. Michigan. Karlik believes it would take his firm about a year to pre-sell enough condos to convince a construction lender to finance the project, and he believes construction would take about three years.

Oxford's project two blocks north also involves a vintage rehab: that of the 14-story Essex Inn, 800 S. Michigan Ave., that the firm acquired last year. The 54-story, 454-unit apartment tower would rise next to the Essex, and include two rooftop bars — one for residents and another for the public — that would look over Grant Park through a criss-cross of beams connecting to the high-rise's upper floors.

A street-view rendering of the proposed tower at 800 S. Michigan. [Hartshorne Plunkard Architects]

When asked by the room how his project would fit in with neighboring buildings along the Historic Michigan Boulevard District, Oxford CEO John Rutledge said his team is "very sensitive to doing things the right way," and wants to add to the city's longtime legacy as the birthplace of the skyscraper.

"We build tall buildings in Chicago," he said. Oxford has not completed shadow or traffic studies yet for its project.

Burns, the alderman, occasionally directed traffic at the meeting, which quickly turned heated as neighbors expressed their concerns. He repeated several times that the meeting marked the first public presentations in a long planning process, but did say that both affected project sites — Oxford's a parking garage and JK's a vacant lot — should be developed to a "higher and better use."

"To grow you have to add housing," Burns said. "If we start saying no to building buildings like this in Chicago, we won't grow."

Still, many who attended the meeting left unsatisfied, and as they returned to their neighborhood still rife with vintage lofts and other low-rise buildings, unconvinced by the developers' pitch to make their part of town more of a skyscraper haven like the north end of The Loop.

"The South Loop is different from the north end," one woman said at the end of the meeting. "You can't even compare the two."