CHICAGO — Phillip Powell wears the same shirt under his King College Prep football uniform and pads for every game.

The gray T-shirt carries the phrase: "When I score it's skill. If you score it's luck." It was a gift to Powell from his older brother, Quaashi Chandler, about a month before Chandler died on the football field from an asthma attack as a star football player at Curie in September 2009.

The shirt represented Chandler and Powell's healthy football rivalry, and even though Chandler was seven years older, he never gave an inch to Powell. That's even when Powell was 4 years old, and Chandler laid blankets down on the wooden floors of the family's Austin home, tackling Powell when he cradled a football and tried to get past him.

"I was never successful," said Powell, whose parents now reside in Kenwood and Belmont Cragin. 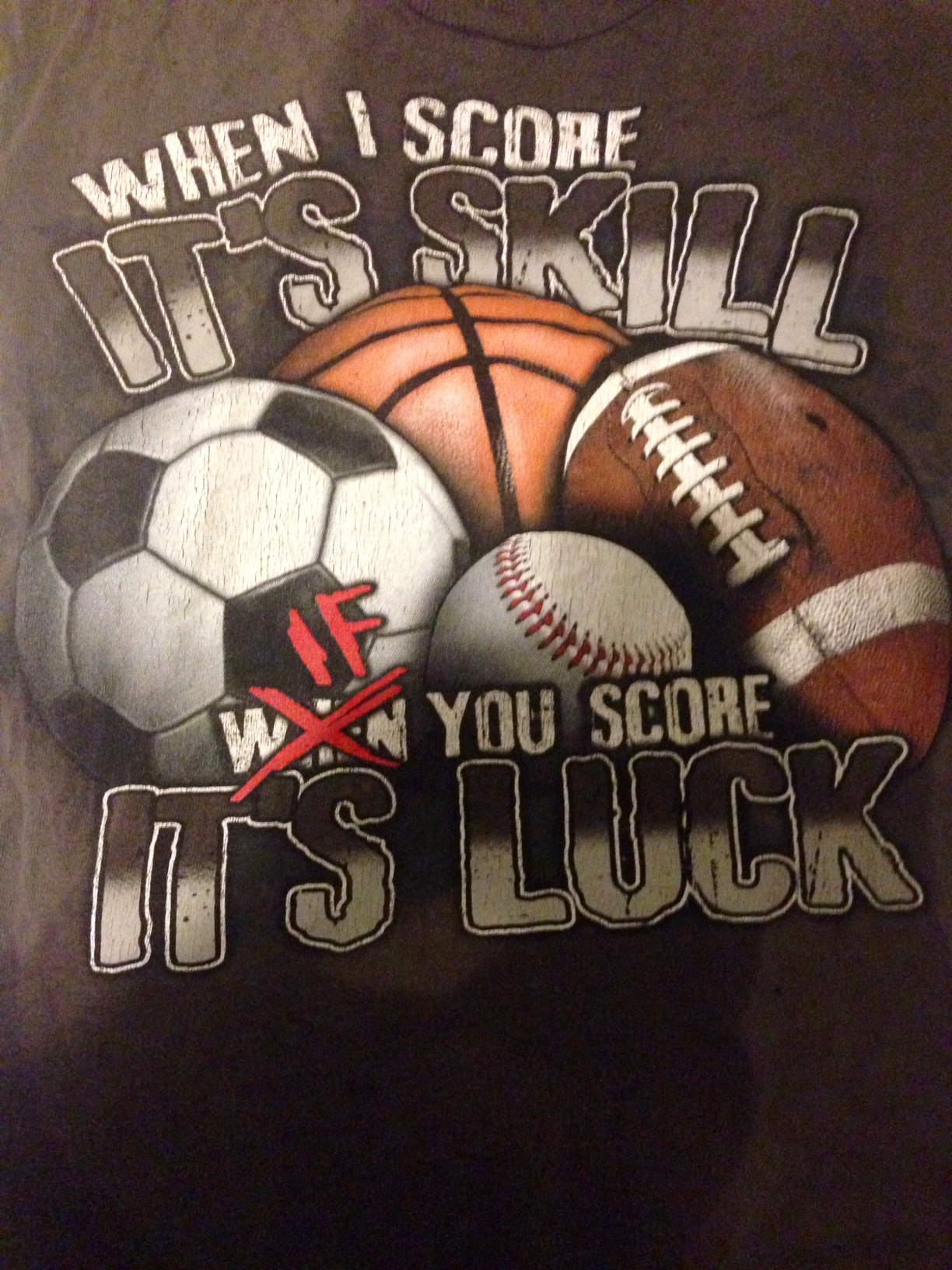 The shirt given to Phillip Powell by his late brother, Quaashi Chandler. Powell wears it during every football game for King College Prep. [Phillip Powell]

But, heading into Friday's IHSA Class 5A playoff game against DuSable, the senior Powell has found success in his three seasons at King, where he at times plays quarterback, wide receiver, cornerback, kicker, punter, safety, punt returner and kickoff returner. The soon-to-be-18-year-old has committed to Western Illinois, where, if he's allowed, he'll also wear the special shirt from his brother under his uniform — even as he's been forced to cut the sleeves because his arms are now too big.

"I've worn it every game of my high school career," Powell said. "My mom knows what the shirt means to me. To everyone else, I just say it's my lucky shirt."

A few weeks ago, Powell forgot to bring the shirt to King's game against Solorio at Hales Franciscan High School. He called his mom, Chantel Boyd, who drove back to Belmont Cragin to grab it and bring it to her son in time. 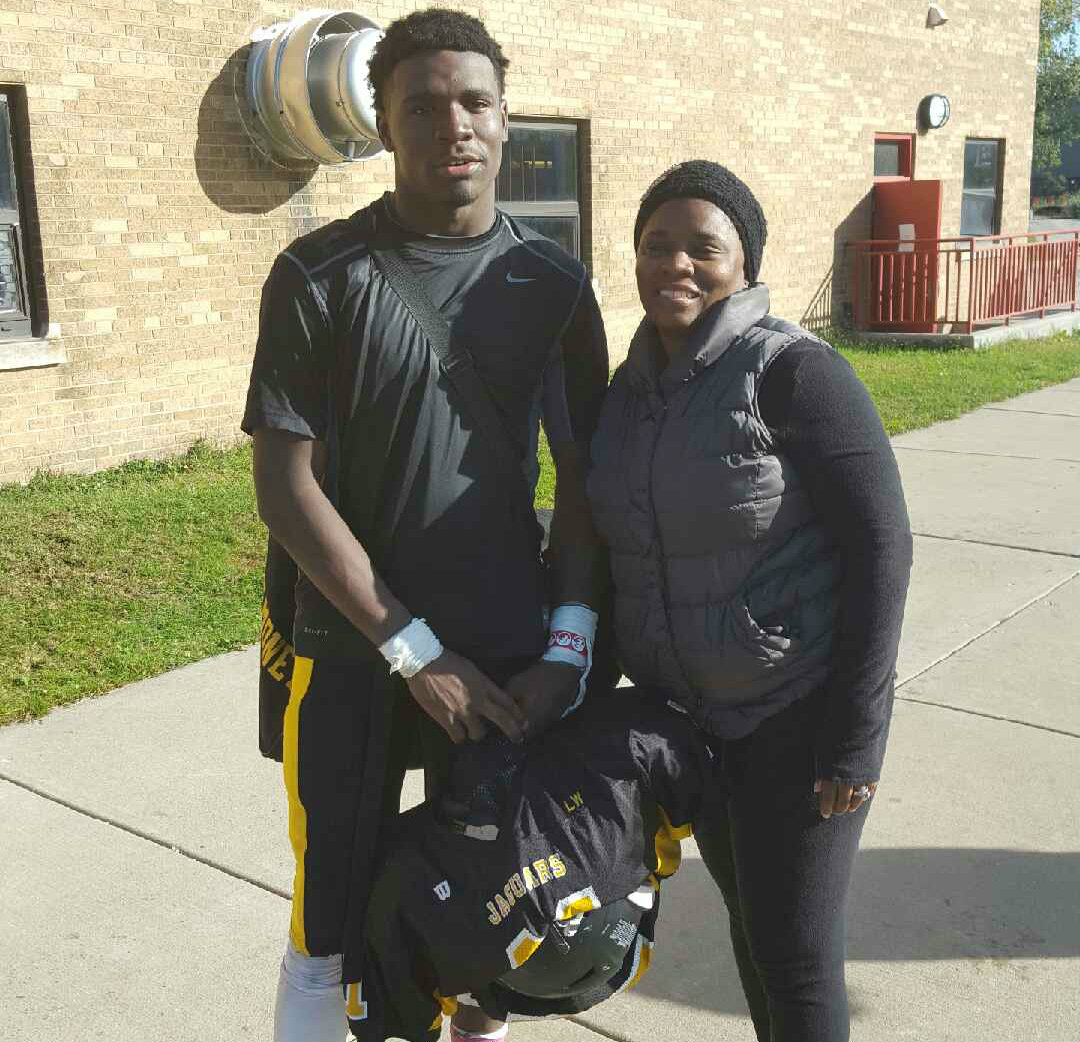 Boyd has her own rituals. On Wednesday, she sent a letter to Bogan High School in care of the parents of Andre Smith, a Bogan football player who died last week from head injuries after a hit he sustained during a game. Since her son died in the game at Bolingbrook — Boyd attended and watched as Chandler collapsed and died from the asthma attack — Boyd has written about 10 similar notes to the parents of football players who have died at practice or games. The notes are addressed to the schools of the fallen players, and Boyd asks that they be forwarded to the player's mom and dad.

"I want the parents to know that they can survive this," Boyd said. "This is a parent's worst nightmare, but you can survive it. I want them to know they're not alone."

Justin Breen says the two brothers were competitive and close:

Boyd leaves her phone number and mailing address in the letter. Of the 10-some letters she's sent, she's heard back from one family.

Powell understands why most don't respond. When his only sibling died, Powell was 11 years old. He had just finished a youth football game with the Windy City Dolphins, when his father, Phil, picked him up and told him that "my brother had an asthma attack, they did everything they could, but he passed away before he got to the hospital."

6 years today. I would give my life to bring you back. 💯🙏 this one for you tho.🏈 pic.twitter.com/zbvh42LQzu

Powell cried every day for a week, then stopped because he wanted "to be the man of the house for my mom and be strong for her."

"She thought I was bottling up my emotions, but I had to help her get through it," he said.

He quit playing football, too, for several years. The fear of getting hit or putting his mom through another tragedy was too great, Powell said.

"When Phillip decided to take time off from football, it not only helped him, it helped me," Boyd said.

But at the end of his freshman year at King, Powell was spotted in gym class playing basketball and volleyball by Lonnie Williams. King's coach since 1971 instantly recognized Powell's athletic gifts and asked him to join the football team. Williams, of South Shore, did not know about Powell's brother.

After discussing Williams' offer with Boyd, Powell accepted, practicing with King during the spring of his freshman year and starting every game for the Jaguars since 10th grade.

"He wants to be the man who wins the game for us," said Williams, whose club is 7-2 this season despite having only about 24 varsity players.

"He's our leader," Williams added of Powell, who has six touchdown receptions, two passing TDs and five interceptions. "He said he wants to carry this team because he knows we're not very deep. He's been carrying us the whole year. He's definitely one of the best football players in the state of Illinois."

Boyd said she has "mixed emotions" watching Powell star for King as he prepares to play Division I football next year in Macomb.

"I’m definitely excited and very happy and proud of him for all his achievements," Boyd said. "However, I’m sad because his brother is not there to see it. To see how big he’s grown, to see how well he’s progressed in the sport. It’s always been their rivalry. I think his brother would be very proud of him."

Powell thinks about his brother every day. He talks to him, too.

Before each game, he says a short prayer to Chandler.

"I'm praying to him to watch over me when I play," Powell said. "To allow me to play to the best of my abilities and let me walk away healthy."