ANDERSONVILLE — For decades, there's been a rumor that Simon's Tavern, an Andersonville mainstay that once served as a speakeasy for the area's Swedish population, has been haunted by the ghost of a woman entangled in a twisted love affair.

Earlier this month, the bar at 5210 N. Clark St., which turned 80 years old during Andersonville's Midsommarfest, was named one of America's most Haunted Bars by TravelandLeisure.com. It also has been featured by Bucket List Bars as one of "Four Haunted Bars to Visit this Halloween."

In the bar's basement, where visitors can sometimes snag a tour of the former subterranean speakeasy, people have reported feeling "a cold woman's spirit go through them."

Josh McGhee details the legend, and says he felt something, too:

She's also been sighted sitting at the bar, and bar staff have felt an unsettling presence while at work.

Scott Martin, the owner of the bar who claims to have never seen the ghost, said the hauntings ended several years ago, but he'll still give you a tour of the bar for a nickel and let you decide for yourself.

DNAinfo Chicago happened to have a nickel Tuesday, and Martin was feeling the Halloween spirit, so he promised to tell the ghost story — the whole story — for the first time in his 21 years at the helm.

Martin said he's heard the lore behind the ghost in bits and pieces since he was a child in the neighborhood. It hasn't diminished his love for all things spooky: Every October, a collection of mutilated dolls, ghouls, skeletons, werewolves and bloody rags hang from the ceiling. Behind the bar a sign reads: The Lost Tavern.

As he begins his ghost story, Martin moves aside a ghoul hanging from the bar's back wall to reveal a torn and now ragged mural known as "The Deer Hunters Ball."

"In the '40s, a lot of guys who were here hanging out were from Sweden. They bought property up in Michigan, where they would go deer hunting. The last weekend of the deer hunting season, they would have their wives and kids go for a big party they called the deer hunters ball," he explained.

Watch Martin talk about the Ghost in the Painting for Bucket List Bars:

In 1949, someone took a picture of everyone at the ball, which took place at the tavern. In 1950, the artist, Sigurd F. Olson, who's known more famously as an author and nature preservationist, asked the original bar's owner Simon Lundberg if he could create a painting of the picture. Simon obliged.

"Simon wasn’t aware he wanted to make a painting for the whole wall. It took him six years ... to paint the whole panel. And he gave it to the bar as a gift in 1956," Martin said.

When the painting was revealed, everyone let out a gasp — except one man who asked "How come my face don't show like everyone else's?"

According to legend, in the photo there was a gentleman looking at another man, who was giving an A-OK sign with his hand around a young lady. After hearing the complaints for months (and consuming the right amount of whiskey), Olson stood on a chair, cut the image out, retraced the canvas and repainted it looking straight ahead, Martin said. 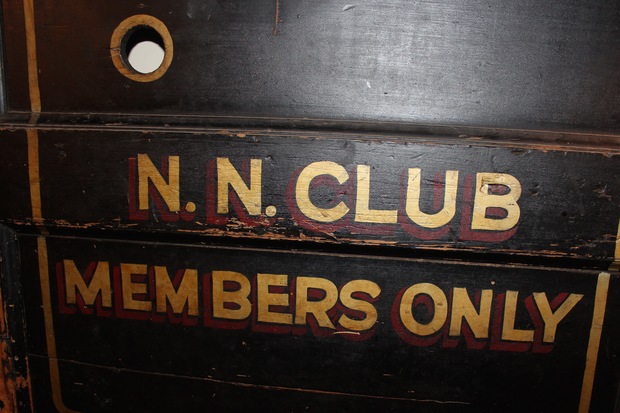 The basement of the bar once housed a speakeasy called "N.N. Club Members Only" from 1929-1933. Today it stores bottles of Malort and other liquors alongside a few artifacts from the original Simon and his family. 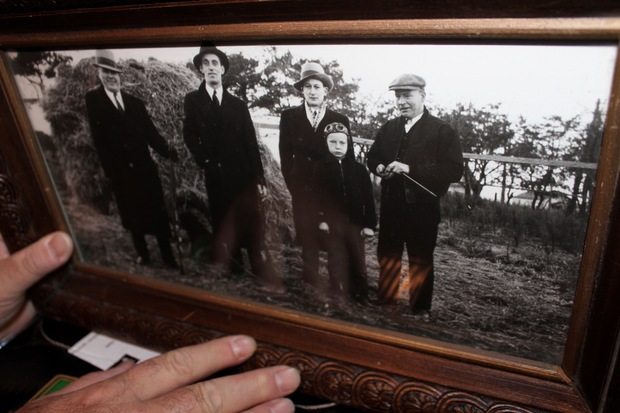 This is a picture of the bar's original owner, Simon Lundberg and his family. Simon is holding a 4-foot double-barrel shotgun. The child is Simon's son Roy. [DNAinfo/Josh McGhee]

One day, while in the basement, Martin found an old projector and some film. He brought the projector upstairs and played it for the six customers in the bar. The film was from the '60s and slowly panned the mural, forcing him to the unfamiliar face of a blonde woman.

"I'm like, 'whoa, wait a second. Did anyone see that?' So I rewind the film. I wasn't remembering how to do it because my dad only used the projectors, and we'd never touch them. I stopped it right where the blonde woman was, and I just saw the bulb [flash] it was so hot," Martin explained.

The image almost went up in flames, he said, but he was able to save it.

He began asking the older patrons about the woman in the painting. They would tell him "no one talks about that" or "I don't know."

Then one day, one longtime patron told him the truth.

"He said, 'Don't ever tell anyone until Roy [Lundberg, Simon's son] passes away, because it's been a bad thing for the family.' And I respected it until Roy was near death."

According to Martin, the true story hearkens back to the '60s, when Roy was in a relationship with a woman who was married. After a night of partying, the two got into a car accident, and the woman died.

When the family heard of the situation, her husband and sons planned to kill Roy. At the time, Simon owned seven bars around the city. He sold six of his bars to pay the family off, Martin said.

"They actually cut her out of the mural to make the whole thing go away," he said.

In 1970, Roy took over the bar, running the place for 24 years until Martin took the helm in 1994. It wasn't until Roy, the last living person in the mural, was on his deathbed, dying of cancer, that Martin began to piece together the truth about the ghost story, he said.

"You could tell this would be the final one. I'm upstairs [where Roy lived] I say goodbye to him. I come down and I look at Roy and I'm telling him, 'I'll take care of your dad's place,'" said Martin.

Later that day, he noticed a top portion of the canvas was coming undone.

"That's all I thought. I didn't feel anything."

Three days later, "I'm upstairs once again and, now, I'm really saying goodbye. It's going to be any moment. I come down and I'm crying. And I see the hair on my arm stand up and move. I saw my beard go out. It stood up, and I screamed."

Officially freaked out, he called the bartender over to examine the canvas, where it looked like a box had been cut around the image of Roy's face.

"That thing was solidly on the wall, and three days later it was falling off the wall. If you look at the cut it goes down the side of his face, across his neck and it's going up this way," said Martin, tracing the cut in the canvas where Roy's face still hangs on.

"I felt this amazing rush," said Martin, adding the moment made him a believer.

"I think when Roy was in the in-between space, like in those few days really entering death, she's going, 'how would you like it.' She's been still waiting there the whole time because they denied her existence. They cut her out of the mural. Even her family denied her existence. They put her aside, and they took the money as opposed to getting revenge for her death." 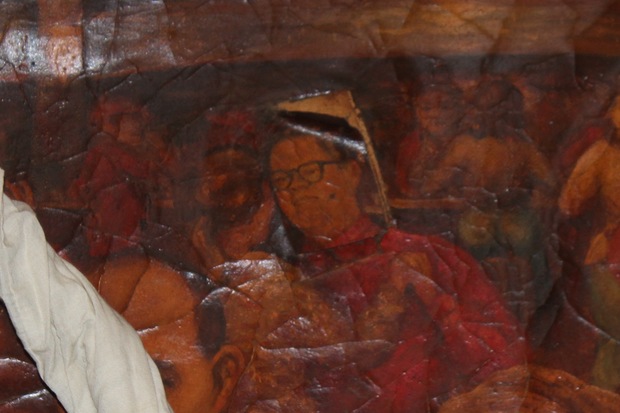 A close-up of Roy's image in the canvas. [DNAinfo/Josh McGhee]

Martin believes Roy's death connected the two lovers, and the haunting days are long gone. He is considering getting the mural redone with the woman's face restored, but it comes with a $31,000 price tag.

On the other hand, not everyone is convinced the two lovers are gone. Last week, a former bartender said she could still feel their presence.

"She ended up staying here until 8 or 9 o'clock at night and heard me talking. She said, 'No, Scott, she's still here, and Roy's here, too. They're just happy now."