CITY HALL — Helen Slade has done all she can to keep her properties in Albany Park affordable for working-class families.

When a new fee or tax has come along, Slade said she has generally paid for them out of her rental profits. But with Mayor Rahm Emanuel's proposed $500 million property tax hike, Slade said she and other property owners will have no choice but to raise rents in working-class neighborhoods.

Slade was one of a dozen or so gathered at City Hall Tuesday to ask aldermen to consider other revenue-generating options so that the city's renters could be spared a massive tax hike.

Joe Ward discusses what the group hopes to do to help renters:

Emanuel's budget, which the City Council will likely approve Wednesday, is set to include $589 million in new property tax revenue so the city can make payments on police and fire pensions.

The tax hike would force landlords to drastically raise prices on renters, who are already paying too much for rent in Chicago, the group said. As of this spring, the median rent for a one-bedroom apartment in the city was nearly $2,000.

Housing should not consume more than 30 percent of a person or family's monthly income, according to Communities United. About 75 percent of Chicago renters earning the median income of $50,000 already pay more than that, the group said.

There are 150,000 households in Chicago that already pay more than 50 percent of their income for rent, said Diane Limas, Communities United's board president. They circulated this map to highlight their point: 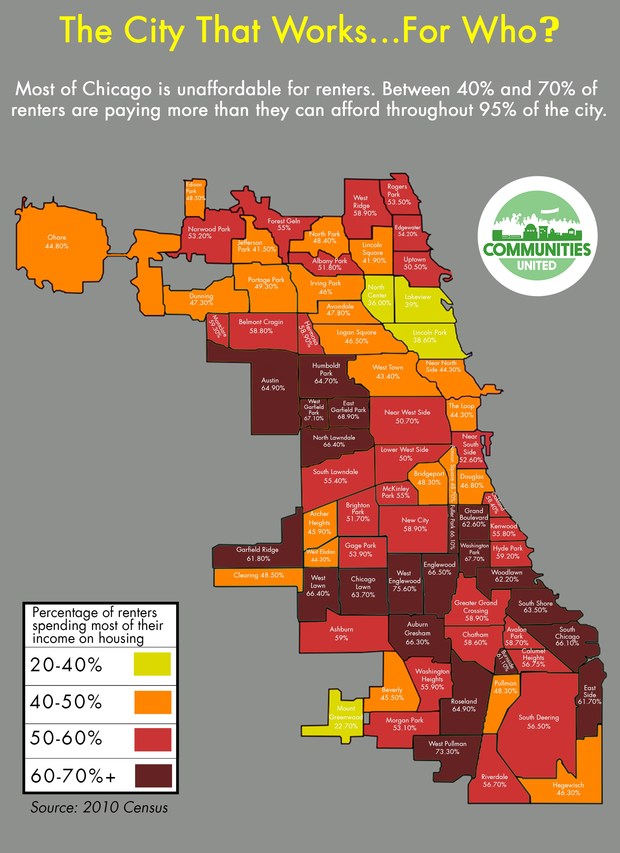 "You ask the working families to do a little bit more and more every year, and we do it," Limas said. "Now, the straw is about to break the camel's back."

Communities United is specifically worried about the Northwest Side, where gentrification already is causing a housing crisis for the area's working-class and minority renters.

With the mayor's tax hike, rents in seven Northwest Side neighborhoods would increase by about $100 a month, according to the group's case study of two-to-four-flat rental units in the area.

An average two-flat in Lincoln Square could see a rent increase $620 a year (or about $51 per month), assuming the landlord passes on the cost of the tax hike to renters, the group said. Albany Park rents for a standard two-flat would increase by $429 a year per unit, the group said.

RELATED: Chicago's Most Expensive Neighborhood To Rent In? It's Not Where You Think

These increases could make Northwest Side neighborhoods unaffordable for most current renters, the group said, and push working-class citizens farther from the city.

"It's right and fair to keep working-class families in Chicago because that's who makes the city work," Slade said.

Communities United sent a copy of its housing study to aldermen, who will be voting tomorrow on the city's largest property tax increase in modern history.

The neighborhood group already has the support of Ald. Carlos Ramirez-Rosa (35th), who spoke at the group's news conference.

The Albany Park alderman said he will likely vote against Emanuel's budget if safeguards for working families are not included. Emanuel has pushed for a tax rebate for properties valued at less than $250,000, but that hinges on cooperation from Springfield that doesn't seem to be coming.

Ramirez-Rosa said if the budget is passed, the Northwest Side will only be accessible to "people with deep pockets."

"Consistently, we've turned to those who have the least, and this budget continues to do that," Rosa said. "We need a budget that protects working families."

Chicago Rents Highest They've Been in Years, but We've Got it Good: Report