WICKER PARK —   A fixture at Wicker Park's main intersection, StreetWise vendor Scott Elders says that an edition tackling the topic of gentrification along the 606 and his review of a nearby burger joint was his best-selling issue.

"Almost 90 copies; that was fun," Elders said on Thursday while peddling magazines to commuters in front of Starbucks at 1588 N. Milwaukee Ave., around the corner from the CTA Damen Blue Line "L" stop.

On an average week, Elders said he sells about 45 magazines published by StreetWise, a nonprofit group that offers independent contract sales jobs to workers who are battling homelessness and poverty.

The edition also included Elders' review of the new Small Cheval at 1732 N. Milwaukee Ave., an offshoot of Brendan Sodikoff's Au Cheval in the West Loop.

"Since this week’s StreetWise cover story is dedicated to the impact of the Bloomingdale Trail on the neighborhoods it streams through, we deemed it only appropriate to review Bucktown’s most recent addition, Small Cheval," wrote StreetWise reporter Sarah Brown.

Elders, who bought a $14 cheeseburger and fries, told Brown all about it in a lengthy narrative, which detailed the line that formed shortly after he arrived, the electronic device that buzzes when it is time to pick up an order and the friendly staff.

Elders, 44, got his job after scoping out StreetWise vendor Russell Adams, at Clark and Lake streets Downtown.

"I was kitty-corner from him shaking a cup. I saw him making money every day and asked him about it," Elders said.

Elders said that he prefers his spot in Wicker Park to any other sales post.

"Wicker Park consumers are not as snobby as Downtown. I have about 20 regulars that buy from me," he said.

Though he was homeless at the time he got his job, Elders, who sells papers from 6 a.m. to 10 a.m. Tuesday through Sunday, now lives in a single-room-occupancy hotel in River West.

"StreetWise helps people get back on their feet if they are willing to," Elders said.

Looking to buy a copy of StreetWise? Check out this interactive map. 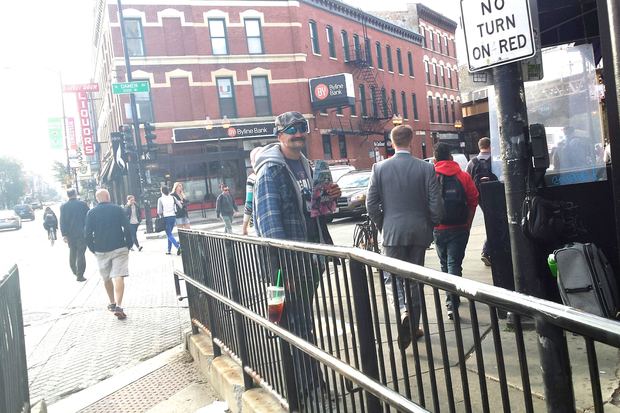