SOUTH LOOP — The South Loop is getting dense.

The Downtown neighborhood that was once the city's epicenter of the 2000s condominium boom-and-bust is replete again with proposed high-rises. Two days after a Miami developer presented its plan for two skyscrapers that would rise at least 76 stories high at 113 E. Roosevelt Road, another builder filed a zoning application Thursday for an 86-story, 506-unit tower nearby at 1000 S. Michigan Ave. that would be the fifth-tallest building in the city. 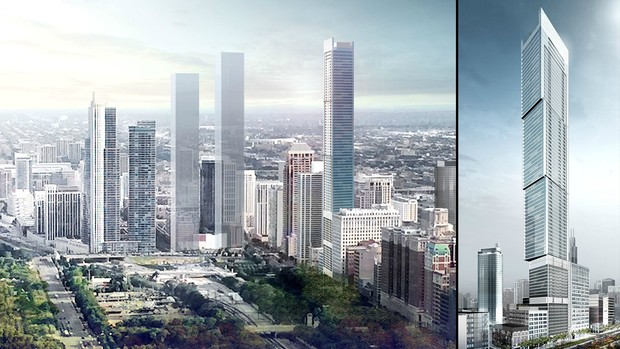 The proposed 86-story tower is shown to the right of the two towers and in detail on the right. [Jahn]

That makes six residential developments that would add 3,886 new homes to the South Loop proposed in the last two weeks alone. They include:

• A 246-apartment tower at Cermak Road and Wabash Avenue.

• The aforementioned twin towers and town homes at Roosevelt and Michigan.

Dave Matthews discusses how the neighborhood is reacting:

The swell of development shows an economic cycle that has come full circle in the South Loop, where condo prices fell the most out of any Downtown neighborhood during the recession amid a glut of failed condo projects. Prices have since come back, and new developers are looking to move in, hoping to lure professionals who are priced out of more established neighborhoods such as River North.

"It’s clear that there’s been a migration of people heading to the South Michigan Avenue market," developer John Murphy, who proposed the 48-story tower at 13th Street and Michigan, told DNAinfo Chicago on Tuesday.

While the new development boom may bring back memories of the housing bubble, most of the new buildings are proposed apartments instead of condos.

But some South Loop residents are worried about the onslaught of new homes, feeling the developers aren't addressing ancillary neighborhood resources, including roads and schools they fear will be strained by thousands of new residents.

South Loop Elementary School, 1212 S. Plymouth Court, was built for 580 students in 1988, but now houses about 870, said John P. Jacoby, a lawyer who used to sit on the school's council. The neighborhood high school is Phillips Academy, a Bronzeville school with boundaries stretching from Wacker Drive to 67th Street.

Addressing the elementary's overcrowding, which is expected to only worsen amid new development, is "an issue that deserves a lot more attention," Jacoby said.

It's possible the influx of new apartments would push overall rents down, he said, but the newest luxury towers Downtown like the ones proposed this week will test or establish the city's high end of rental rates. But he thinks that's better than the alternative: nothing getting built and the neighborhood's housing stock remaining limited.

"That pushes people who would be living Downtown to whatever the next neighborhood is, and perpetuates the cycle of gentrification," Hertz said.

The new developments will add to the city's tax base during a time of need, beget retail and other neighborhood amenities, and the overall nationwide trend of investing in urban cores — instead of far-flung suburbs — is a smart one, Hertz said.

It's also true these projects are still merely proposals that, depending on politics or the economy, might never be built. But if they are, Feldstein and other neighbors hope their concerns are addressed. Two big ones: congestion on Roosevelt Road and Grant Park.

Feldstein said it took her more than an hour to drive from the historic Prairie Avenue District to the north end of Grant Park during last weekend's triathlon, an event she felt should not have shut down the city.

"We love development. Don't get me wrong. It’s so exciting to have these iconic buildings coming to the area. We want that," she said. "But what we don’t understand is why none of these plans are contributing or addressing the underlying issues of infrastructure and access."