Apartment/Hotel Project Proposed for South Loop, Would Displace The Shrine

MCCORMICK PLACE — A Chicago developer wants to build an apartment and hotel project at a prominent South Loop corner, a plan that would force The Shrine nightclub to close and move elsewhere.

Draper and Kramer Inc. unveiled its proposal for the northeast corner of Cermak Road and Wabash Avenue during a neighborhood meeting Tuesday hosted by Ald. Pat Dowell (3rd). The development designed by Chicago-based Solomon Cordwell Buenz would include a seven-story, 144-room hotel and adjoining 19-story, 246-unit apartment tower.

The developer is under contract to buy the land, which is currently leased to an auto shop, a strip retail center and The Shrine, a nightclub known for hosting rap shows and other live "soulful" music. Daniel Kravetz, the proprietor of a currency exchange at the corner and current owner of the would-be development site, did not return numerous messages seeking comment.

The "three- or four-star" hotel would front Cermak, with the apartments in the back, according to Gary Kohn, a managing principal at the architecture firm that led Tuesday's presentation. The project would also include 10 affordable housing units and contribute to the city's affordable housing fund. If built, the project would sit a block from a new Green Line stop and include a "sky lobby" amenity deck atop a garage connecting the two buildings. 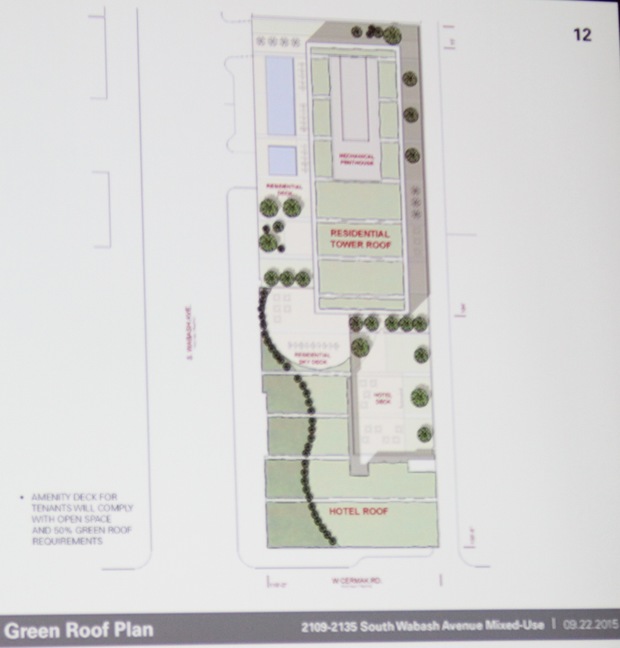 A site plan for the project's "sky lobby" and green roof.

A Dowell aide previously told South Loop residents at police community meetings this summer that a developer was circling the property. Many neighbors at those meetings aired concerns over street fights and other incidents they believe stemmed from The Shrine, which first opened in 2009 at 2109 S. Wabash Ave. Joe Russo, The Shrine's owner, did not return numerous messages seeking comment, including one left late Tuesday.

The project would require a zoning change and requires city approval. Scroll down for more renderings of the proposed development: 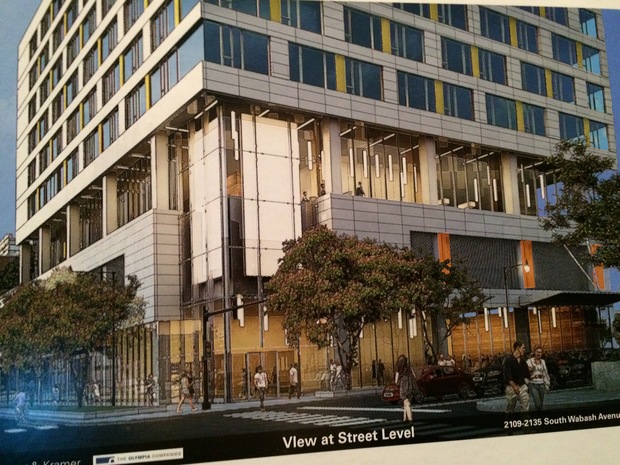 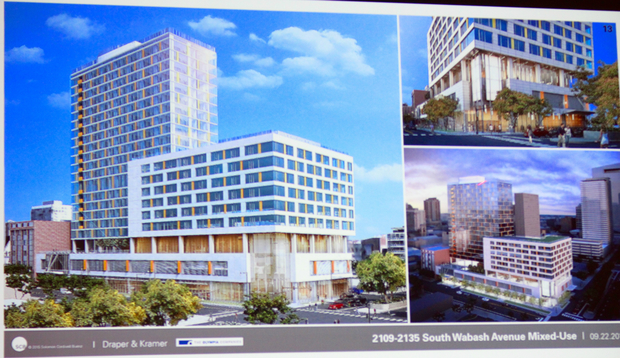