By Linze Rice |&nbspSeptember 22, 2015 5:41am | Updated on September 22, 2015 5:49am
@linzerice
Twitter Facebook Email More
Chicago Housing Initiative organizers confronted Ald. Joe Moore Friday over what they say is a delay in a housing committee hearing to discuss stricter oversight of the city's housing authority.
View Full Caption
ONE Northside

ROGERS PARK — Organizers rallying behind an ordinance that would provide stricter oversight of the city's housing authority say they were promised a hearing this month before the Chicago Housing Committee by its new Chairman, Ald. Joe Moore (49th), who also co-sponsored the bill during his latest re-election cycle.

Now, they say the alderman has repeatedly delayed the hearing and has backtracked on his support.

But Moore says the ordinance's proponents are "mistaken." He said that although it was "possible" he told the ordinance's advocates he would try to hold a September hearing, he "certainly made no ironclad commitment."

The issue at hand is the "Keeping The Promise" ordinance, a proposal that would tighten management of Chicago Housing Authority funds and actions, which was backed by 15 aldermen when introduced to City Council on Sept. 10 last year.

Organized by the Chicago Housing Initiative — a housing advocacy coalition of members of various nonprofit organizations citywide — the ordinance says it "is an effort to drop homelessness in Chicago and dramatically increase access to affordable housing at no cost to Chicago’s City Government through reforming the Chicago Housing Authority."

Proponents say the ordinance is necessary, largely due to the $432 million surplus CHA was sitting on at the end of its 2012 fiscal year — a cash stockpile accumulated by circulating 13,500 fewer housing vouchers than the federal government had funded.

According to the Mayor's Press Office, the CHA leased 3,000 housing vouchers last year and is "on target" to lease 6,000 more this year.

Vivien Tsou, a community organizer with ONE Northside, said she and her constituents met with Moore one month after he took over as the housing committee's chairperson in June, to settle on a time when a hearing could be set to discuss the Keeping The Promise ordinance.

They say he told them then he would hold a hearing in September, a notion Moore has refuted.

According to Tsou, there are about 510 CHA voucher holders and 598 units of Section 8 housing in the 49th ward.

In June, Moore told City Council he would hold CHA accountable for questions on unused vouchers during a hearing.

"I don't think the previous administration of the CHA has done a really good job of explaining to people about why we have all that money," Moore said.

Tsou said she got a phone call several weeks ago from Moore's office saying that the September hearing was off and that the alderman wanted to reconsider a few aspects of the ordinance with the Mayor's office and CHA before committing to a full hearing.

Moore said people who were not involved with CHA had raised some "very serious concerns" which has given him pause on the ordinance.

"They have expressed concerns that the ordinance has significant flaws that would likely repeat many of the public housing mistakes of the past — concentrating poverty in disadvantaged neighborhoods, warehousing families away from jobs, and failing to provide support services that make public housing a ladder to opportunity," Moore said.

Tsou said those issues are all addressed in the ordinance, leaving her to wonder if the alderman "even ever read" the ordinance he co-sponsored.

The preliminary meetings Moore wanted would take a while, she says she was told, because with a larger group involved, more people would need to accommodate their schedules.

So, she said, the Chicago Housing Initiative and its supporters began to mobilize — meeting in the early weekday hours to confront Moore about scheduling a hearing during his satellite office hours at various locations across Rogers Park.

At the most recent confrontation on Friday at the Gateway Center in Rogers Park, Chicago Housing Initiative protesters holding signs critical of Moore and passing out fliers with information about the ordinance were asked to leave after Chicago Police showed up. 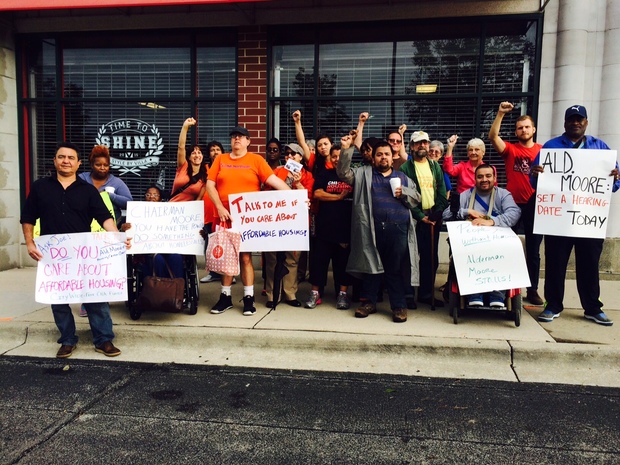 Keeping The Promise organizers were mostly asked to leave by both security and Chicago Police during Friday's confrontation. [ONE Northside]

Moore said it was the building's security employees, not him, who called police "because they had failed to get advance permission to assemble on Gateway's property" and did not heed security's warning to leave the property when asked.

Bob Rudner, a 63-year-old Rogers Park resident affiliated with Chicago Housing Initiative who qualifies for CHA vouchers, said it was a "slap in the face" to see police show up to Moore's satellite office hours especially after so many residents, like Rudner, had endorsed Moore partly based on his commitment to Keeping The Promise.

"It was a slap in the face, it's just very contradictory to the type of progressive representation that we once had from Joe when I first came into the ward 12 years ago," Ruder said, who has been battling a return of his childhood polio, losing mobility in his left arm and leg. He said he hopes to eventually be able to move out of his second floor apartment to a home that can accommodate his condition better.

"A public tabling to get him on the ballot while filtering out noisy constituents, it just flies in the face of democratic activity."

Some of the organizers were able to remain in the building, including Tsou, who said it was there they learned Moore already had been meeting with city administrators, including the mayor's office, about the ordinance without Tsou or her colleagues present — a discovery that frustrated Tsou who said it was those very meetings that were supposedly causing the hearing's delay.

Moore said he recently met with the mayor's staff, CHA administrators, Ald. Walter Burnett (27th) and the staff assistant to the chief sponsor of the ordinance, Ald. Joe Moreno, "to provide the CHA an opportunity to give my colleagues and me their perspective on the proposed ordinance," he said.

At the end of the meeting, he said he suggested an additional meeting in which the ordinance's advocates and CHA officials can meet "so that we could all have a common understanding of the issues and concerns underlying the ordinance." He says he is in the process of scheduling that meeting, but does not have a timetable on when he can hold a hearing on the ordinance before the city's housing committee. 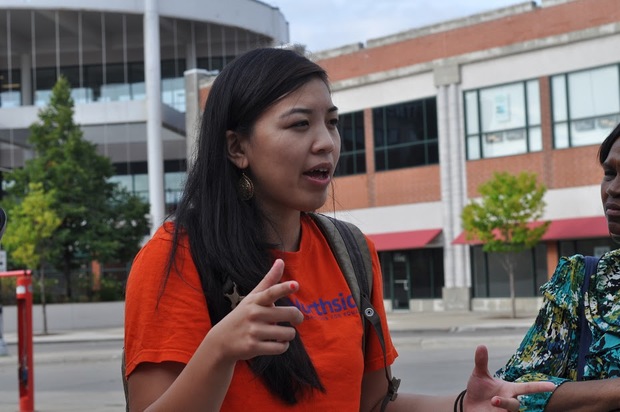 Organizer Vivien Tsou said she's frustrated the co-sponsoring alderman keeps coming up with reasons to delay a hearing on the Keeping The Promise ordinance. [ONE Northside]

But Tsou said she doesn't believe a series of meetings to hash out the ordinance behind closed doors will further progress discussion on the law, only delay it further.

At the end of their confrontation with Moore Friday, Tsou said the alderman was left with a list of demands from the group: schedule a date for whatever meetings Moore wanted with the mayor's office and CHA, and schedule the housing committee hearing by Monday at 5 p.m.

Those "demands" were not met come end of day Monday, prompting Chicago Housing Initiative advocates to regroup and revisit Moore during his outside office hours Tuesday morning.

Tsou said her group received a call from Moore's office Monday, who expressed frustration that organizers have insisted a September hearing was promised when Moore says it was not.

She said she was also told administrators are far from scheduling anything in the near future.

"Their reasoning is that the budget season makes it impossible to know when it is possible to hold a hearing—not even if November or December is a possibility, no date at all," Tsou said.

But many people can't wait any longer, Tsou said.

People like Joy Bell, a senior citizen who lives in Rogers Park, are depending on Moore and advocacy groups to live a better life, Tsou said.

Bell, a new ONE Northside community organizer, said she lives with painful arthritis that especially affects her knees, making it necessary for her to wear a brace.

She said after struggling with homelessness and unstable housing for most of her life, and waiting over 20 years for an opportunity to get on the CHA wait list, she was able to register during an open period at the end of last year.

Now, she hopes one day she is able to live in a safe, affordable unit of her choosing where her young grandchildren are welcome to live with her.

"I'm still trying to get to that clean, safe, affordable place and be of my choice," Bell said.

Another group, Preserve Lathrop Homes, wrote on their Facebook page that they would be headed to Moore's satellite office hours Tuesday morning at 7 a.m. to call upon Moore to "keep his promise" on the hearing.