Half Acre, Now A Chicago Craft Beer Graybeard, Is Getting More Whimsical

NORTH CENTER — It's only been eight years since Half Acre debuted its inaugural lager, a drop in the barrel compared with Anheuser Busch's 160-year history. But in the craft beer industry a near-decade's worth of experience is enough to earn a brewery elder statesman status.

"Brewing is measured in dog years," Half Acre founder Gabriel Magliaro said of the pace of change.

Listening to Magliaro reminisce about the "old days" — when Goose Island was the only other brewer in town and bars maintained fewer than a dozen taps that they swapped out next to never — he might as well be talking about the Dark Ages.

Patty Wetli chats about Half Acre's rise in the craft beer world:

Today, as new craft breweries pop up seemingly daily, how does Half Acre maintain its mojo?

By simultaneously expanding and contracting. 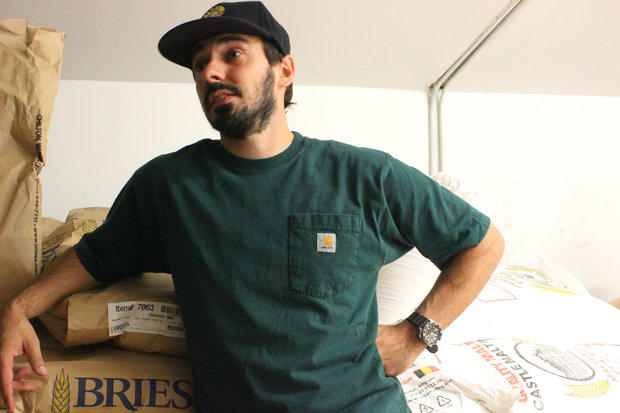 Magliaro founded Half Acre in 2006 and he and business partner Matt Gallagher opened the company's North Center brewery, 4257 N. Lincoln Ave., in 2008.

Financing for the brewhouse came through just before the Dow Jones took a major nosedive, Magliaro recalled.

"If the market had collapsed three months earlier, we wouldn't have gotten that loan," he said.

A taproom followed in 2012 and in 2014, Half Acre announced it had inked a deal to build a new 60,000-square-foot production facility in Bowmanville, where it could increase capacity from 14,000 barrels of beer per year to 30,000 barrels.

With the majority of Half Acre's operations now having shifted to Bowmanville, the North Center location, far from being abandoned, has been transformed into a hub for experimentation.

"We want this place to be a creative lab only," Magliaro said of the Lincoln Avenue site. "This is all whimsy. Daisy Cutter, there's zero whimsy about that. We know how much we're making a year in advance."

On a recent afternoon, Half Acre employees were bottling the test lab's first output, a limited-edition kölsch dubbed Harshad.

The brew was created specifically for the School of the Art Institute of Chicago, which is hosting a year-long series of events in 2015-16 to celebrate its 150th anniversary.

Harshad will be served Saturday at a block party for the school's alumni, a group that includes Magliaro, who graduated in 2003.

The school "prepares artists and scholars to do all kinds of work," said Jennifer Jansen, the school's associate director of alumni relations.

Magliaro is "kind of the perfect example for students of how to take what they learn" at the school and apply it in the real world, she said, adding that Ben Finch of Finch's Beer is another graduate.

Dabbling in a variety of artistic mediums at the school, be it photography, writing or design, proved to be excellent training ground for life as an entrepreneur, Magliaro said.

"You have to be proficient at a lot of things," he said. "I did not go to business school. I do not have an MBA. What I did have was, you know, some guts and the confidence to think creatively."

In collaborating with the school on Harshad, Magliaro brought all of his skills to bear on every step of the process, including the label's design, in which he incorporated an ouroboros symbol (think circle of life) to represent the creative cycle and a customizable typeface developed by the school for its anniversary. 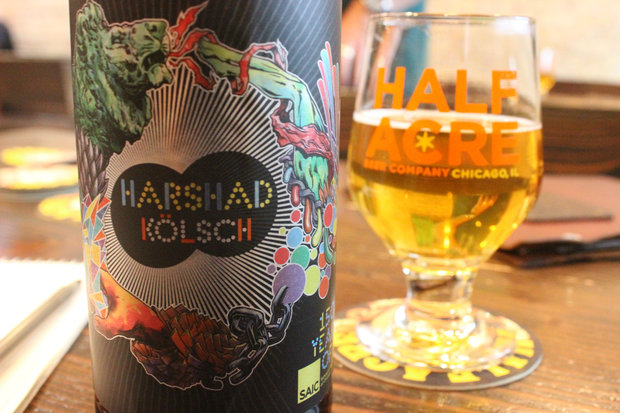 From Half Acre's test lab, a limited-edition collaboration with the School of the Art Institute of Chicago. [DNAinfo/Patty Wetli]

The school's primary requests regarding the beer were for a lower alcohol content and something that would be palatable to a wide group of people, Jansen said.

"Once we got the go ahead, Gabe and his team went with it," she said.

In his mind, Magliaro pictured that large group of people as Germans, which led him to kölsch, Germany's version of a pale ale.

"We wanted something clean and crisp but that didn't fit an exact style or traditional mindset," kind of like the school itself, he said.

In devising the recipe for Harshad, Magliaro tweaked the type and proportions of hops, using almost entirely noble (European) hops, such as Saaz, along with a smattering of Crystal hops (known for their gentle bitterness) and the trendy, aromatic Citra. The result is an eminently quaffable beer that's fruity on the nose, but not the palate, with the slightest trace of bitterness.

"We nailed what we wanted to do with it," Magliaro said. "This beer is a kölsch ... but a German would be like, 'This is not a kölsch.' "

Even knowing that Harshad would debut at a high-profile event, Magliaro stuck to Half Acre's practice of not brewing sample batches.

After giving his fellow grads the first taste of the beer, Magliaro will offer Harshad in bottles and on tap at Half Acre while supplies last.

The process of making Harshad has already reignited Half Acre's fire, according to Magliaro.

"Just doing this beer ... is a way for us to invigorate ourselves," he said.

More new endeavors are on the horizon. Moving the brewery's canning line and other equipment to Bowmanville freed up space in North Center for a barrel room where Half Acre can store beers made with wild yeast.

A kitchen is also in the works — coming as soon as the appropriate licenses and permits are obtained.

"Food is going to be a real serious endeavor," Magliaro promised, both in North Center and Bowmanville.

Having "run the gauntlet early on" and paved the way for so many of the craft brewers that followed, Magliaro said Half Acre is now at the point where it can be itself.

"We're not a microbrewery anymore," he said. But at the same time, "weird, raw and funky beers is where we want to sit."

It would seem that far from feeling its age, Half Acre has a new spring in its step.