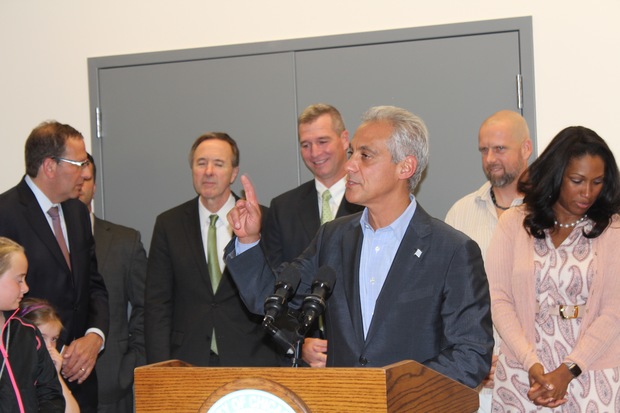 Mayor Rahm Emanuel said students at Wildwood Elementary were forced to study in closets and hallways for too long. [DNAinfo/Heather Cherone]

EDGEBROOK — Parents and students from Wildwood Elementary School hailed Mayor Rahm Emanuel as a rock star Thursday, showering him with cheers for building an annex and relieving severe overcrowding that forced students to study in hallways and closets.

As Emanuel entered the new multipurpose room in the three-story, $15-million annex, students clamored for his autograph and parents reached to shake his hand. The room was packed to capacity, with some standing on tables to get a glimpse of the mayor. 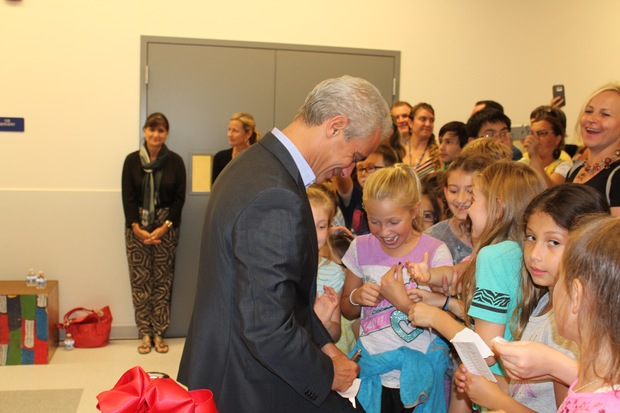 Abad Viquez, 13, who is now in eighth grade and started at Wildwood as a kindergartner, said he was glad he no longer had to attend to class in a closet, or fight his way through the "always crowded" hallways where his wheelchair would get "squished."

In addition to the new lunchroom/multipurpose room, the new annex at 6950 N. Hiawatha Ave. include 12 classrooms, a computer lab, library, art room and administrative offices. 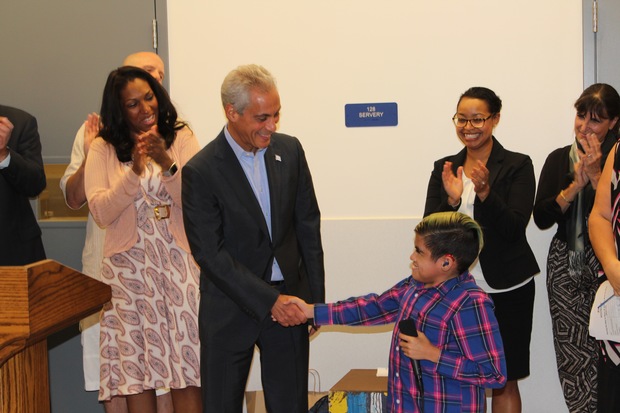 Emanuel, accompanied by Chicago Public Schools CEO Forrest Claypool, thanked the parents of Wildwood students for being tireless advocates for their children, and promised they would now receive a "21st-century education in a 21st-century building."

It was a far cry from a similar opening ceremony for a controversial addition at Lincoln Elementary, which devolved into tears and a shouting match as Dyett High School protesters crashed the celebration. Opponents of the annex have long argued that too many city resources were being poured into the North Side school, which was far from the most crowded school in CPS.

Although Wildwood's building was meant for 240 students, 424 students were enrolled during the 2013-14 school year. That gave the school a utilization rate of 177 percent, one of the highest in the city, according to CPS data.

Even with a four-classroom modular building, the school had an adjusted utilization rate of 128 percent, which is still considered overcrowded, according to data provided by CPS.

Johanna Zawada, whose children are in fifth grade and kindergarten at Wildwood, said she was thrilled that the annex had finally been built.

"The kids now have the space they need to learn and be creative," Zawada said. "The classrooms were very cramped." 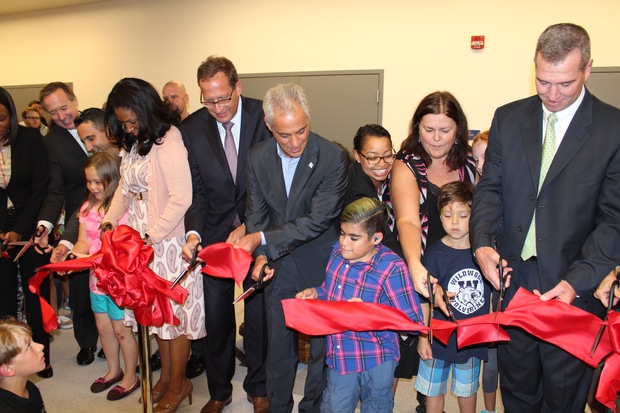 Despite Emanuel's rapturous greeting, he acknowledged the controversy created by the decision to build the annex on what was once part of Wildwood Park, displacing the basketball courts and a water play area.

Most communities don't "cry" when officials offer to build an annex to an overcrowded school, Emanuel said, adding that Edgebrook residents care deeply about their community.

Ald. Anthony Napolitano (41st) celebrated the "beautiful" new building — approved before he took office earlier this year — but said schools "on the other side of the ward" also need expansion.

Parents at Ebinger Elementary School have been petitioning city and school officials to expand their school in Edison Park.

Enrollment at the school, which offers a magnet program and an International Baccalaureate curriculum, is expected to grow for the next three to four years, district officials said.