JEWELERS ROW — Construction of the Washington-Wabash "L" stop, a $75 million endeavor, will replace two century-old stations and is projected to be one of the CTA's busiest stops when it opens next year.

It's also killing sales, some nearby jewelers said.

Giovar Jewels, which since 2008 had sold wedding bands and other valuables out of the Wabash Jewelers Mall, 21 N. Wabash Ave., packed up and left in June, owner John Kurji said.

Kuriji tells Dave Matthews he lost 70 percent of his business:

Why? Kurji lays blame on the "L" stop's construction, which has closed the mall's block of Wabash since March and will continue to do so until the new station opens in fall 2016.

Pedestrians can still walk the block on Jewelers Row, a historic merchant center on Wabash that was designated a city landmark in 2003. But to do so, at least from Washington to Madison, they'll have to squeeze through barricades blocking storefront visibility and hemming in passersby from a dusty, noisy construction site.

Kurji said he had to break his lease after his sales fell 70 percent this year, leaving him unable to cover rent.

"It pretty much put us out of business," Kurji said of the construction. "Twenty, 25 percent, it’s fine, you say you can manage. You drop down 70 percent, that means really bad news." 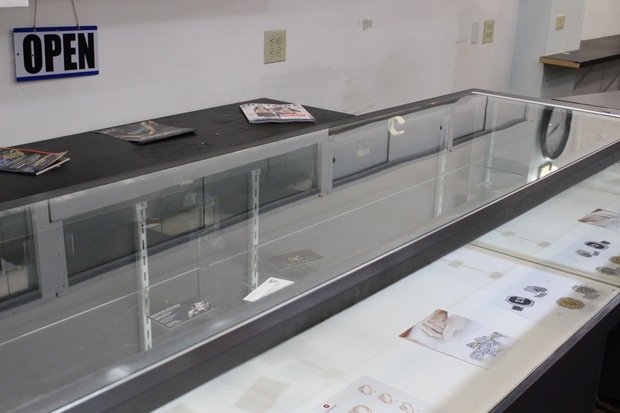 Giovar was one of a handful of jewelers in the mall, which also houses a restaurant in the back. Another jeweler in the building, Charles Domingue of Diamond and Gold Creations, said the construction has hurt his business, too. He's thinking about moving in April, when his lease expires.

"I'm just trying to hang till then," Domingue said.

Kurji and Domingue said they depend heavily on foot-traffic for sales in light of changing consumer tastes and competition from the Internet.

"Otherwise it's like this all day long," said Domingue, pointing to an empty store. 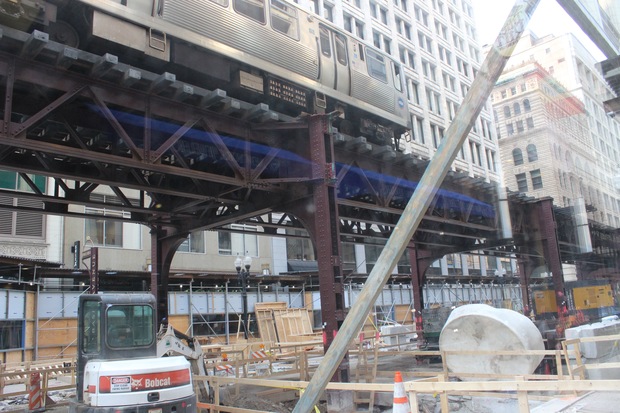 An L train over Wabash Avenue, which has been closed from Washington to Madison streets since March.

The new station is a "badly-needed" project, said Mike Claffey, a spokesman for the Chicago Department of Transportation. He said the department conferred with "a number of stakeholders," including Wabash retailers, for more than a year before construction started in March. The group continues to have monthly progress meetings, Claffey said.

He added that the department has worked to accommodate retailer concerns by building well-lit construction canopies with windows, earmarking space for jewelers' valet parkers on Madison and Washington, and pushing construction until after the holidays and Valentine's Day. Once open, the station is expected to be the CTA's fifth-busiest station on weekdays.

"The new station will provide a striking new transportation facility that will serve as a gateway to the east side of the Loop and the many businesses and other attractions that are located there," Claffey said in a statement. 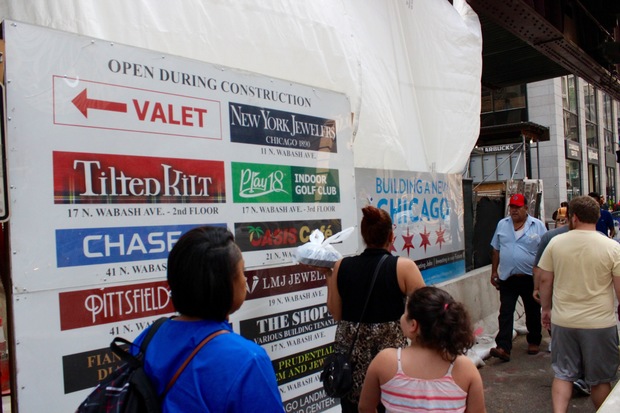 A sign directing pedestrians to stores along the closed stretch of Wabash at Washington.

Kurji and Domingue were two of several merchants DNAinfo Chicago interviewed for this story. Many, including New York Jewelers at 11 N. Wabash Ave., declined to comment or referred questions to corporate communications departments.

Michael Edwards, president of the Chicago Loop Alliance, said he supports the new "L" stop, but knows from going to city meetings that many Wabash retailers are observing "lower pedestrian volumes" from the construction, and some — like Giovar — have closed or moved.

He hopes most will stick around for the new "L" stop, which he envisions anchoring a "maker district" with new street lights full of creative retailers, including jewelers. Next month, the Loop Alliance will throw a party on Wabash between Monroe Street and Madison to "re-acquaint" shoppers with the street.

"We hope Jewelers Row will continue to be a centerpiece of Wabash," he said.

Giovar has since reopened in the Jewelers Center at the Mallers Building, 5 S. Wabash, which is just south of the street closure. Kurji said his rent is much less than the $11,000 he was paying per month at the Jewelers Mall, though he maintains he was able to make his payments before the CTA construction began.

Howard Frum, another more prominent jeweler in the Mallers Building, said the construction has hurt his sales, too, but it'd be "ridiculous" for him to move. Not only because of the new station on the way, but the bevy of new restaurants and hotels sprouting nearby, too.

"I'll wait the storm out and it'll be better than ever," he said.

But it's apparent that waiting is a luxury many Wabash stores can't afford.

"I have to cut down on other parts of my life to stay here," Domingue said.