HYDE PARK — The secret of Hyde Park’s race car team is literally hidden behind a wink.

It’s necessary to have a local guide you to the 105-year-old garage secreted away down a passage between two three-flats on Kimbark Avenue and then assist in navigating the quixotic rules about getting your car serviced.

If you have an English or French car, the path ahead is smooth, but for anything else there may be some hoops to jump through.

“The only way to stay open as a small shop is to stay up and stay practiced on a particular type of car,” said general manager Pat Lay, who started at the shop in 1965 working on Austin Healies and MGs.

Foreign Car Hospital’s specialty was the English sports cars that flourished in car clubs in the United States after World War II, but that are now almost extinct.

“I got into it because I liked the way they looked, and I loved the way they handled,” Lay said. “I used to be able to do the canyons in Colorado, and my tires would be almost bald.”

Now the shop mostly handles Japanese cars and the occasional Volvo. Lay and his partner Phil Raoul recently were working on three station wagons and a minivan, about as utilitarian as it comes compared to the two-seaters that once defined the garage.

But once inside, there’s the garage’s distinctive logo of a winking eye floating between a handlebar mustache and flattop haircut on every receipt and form.

It takes some badgering (but barely any arm-twisting) about pictures taped to the back of a dusty office window to get Lay to divulge that the logo was the mascot plastered onto an MG and Austin-Healy for “Team Wink,” the garage’s race team under original owner Bob Lester.

“I personally believe Bob Lester started the repair shop because he wanted to own and race these cars,” Lay said. 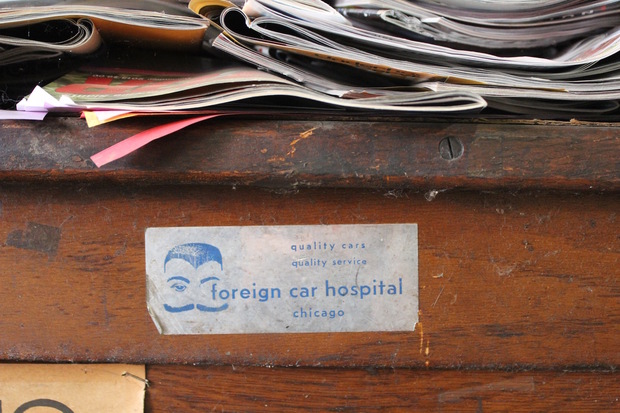 A handlebar mustache and a flattop

By all accounts, Lester was born to be a race car driver.

Lester towered over his blonde wife, Julie, and with the sharp widow’s peak and waxed mustache he could almost appear Turkish at times. Out of the sleeves of his always-stylish shirts were pale hands with abnormally long fingers that he used to pluck out jazz on guitar and tear into race car engines.

But above all, Lester was competitive.

“He was driven and super competitive,” Beardsley said.

According to those who knew him, Lester suffered no mistakes from those on his team, but he was also quick to bring in people who wanted to learn and generous with both his parts and his time.

“Bob took some people like myself under his wing,” said Richard Carroll, who used to take his Fiat 1100 to Lester’s shop. “He would always send you on your way with enough parts, tools and knowledge that you could get the repairs accomplished.”

Carroll said he became friends with Lester when the mechanic was one of the first South Siders to join Outer Drive Hero Drivers Club.

“These were people who drove their sports cars even though they didn’t feel well in the winter,” Carroll said.

Lester was a fixture at the club’s rallies, where drivers were expected to drive with extreme precision and hit checkpoints hidden in riddles at exactly the right time, events the club still hosts.

The club members would join South Side jazz musicians for martinis in Lester’s home in front of the garage. It was decked out in a mid-century modern style with walnut paneling and mirrors and stocked with every Playboy magazine thanks to a favor from Lester’s high school classmate, Hugh Hefner.

But it was on the racetrack that Lester belonged. 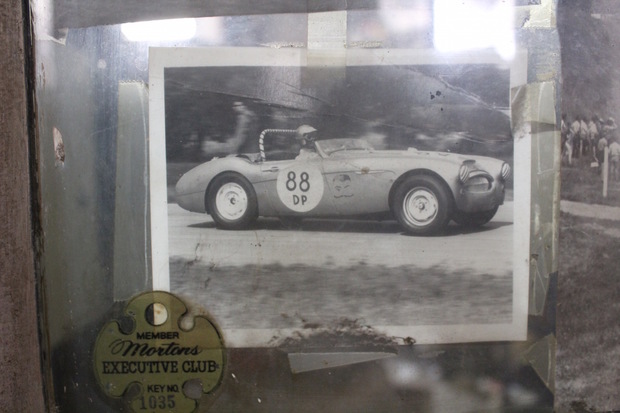 "Miss B" was Team Wink's second car, a modified MG-A.

Lester started Team Wink in 1957 with an Austin-Healy nicknamed “Big Bertha” with a large logo of his winking face designed by his wife plastered on the front left bumper.

He was both the manager and the driver for the team during races at Mid-America Raceway, Wilmont Hills and other tracks until the Sports Car Club of America started requiring physicals of the drivers.

Lester had suffered rheumatic fever as a child that had damaged a valve on his heart, quickly disqualifying him from the ranks of race car drivers.

“I think he minded a great deal and really wanted to race,” Beardsley said of her stepfather. “He was bitter that his heart condition kept him from racing, and he became the uber-lord over everything.”

Lester built a new car, “Miss B,” an MG Midget with a barber-pole-striped roll bar rebuilt from the pieces of a MG wrecked during unloading at Calumet harbor. It was driven most notably by Terry Jesk, who met Lester when he sold him the pieces of his wrecked Austin-Healy, which Lester converted into "Big Bertha."

"I found Bob, and I was kind of a hot-headed guy, and he took to me right away," said Jesk, who went on to race at Daytona and retired in 2012 after more than four decades of racing after starting on Team Wink.

After each race, Jesk and the rest of the team would sit through meetings with Lester presiding that could last as long as three days as Miss B’s engine was rebuilt.

In 1966 Jesk and Lester were on a hot streak, having won six races in a row ahead of the biggest race of the year at Road America in Elkhart, Wis. Then, during the final days of test races before the competition, Miss B burned out a piston, a problem Team Wink couldn't recover from in time for the final race.

He said he and Lester had a falling out over the loss and they never spoke again.

A few weeks after Lester and Jesk's falling out, the strain of both running the shop and the team caught up with Lester, and he died asleep on his couch in 1966 at the age 46 before he could make it to a scheduled appointment to have surgery on the faulty valve in his heart.

Lester’s wife, Julie, took command of both the racing team and the garage.

“After Bob died, she kept racing, and did better than he ever did,” Beardsley said. “My mother was much more collegial and a much better manager, and they did much better at racing.” 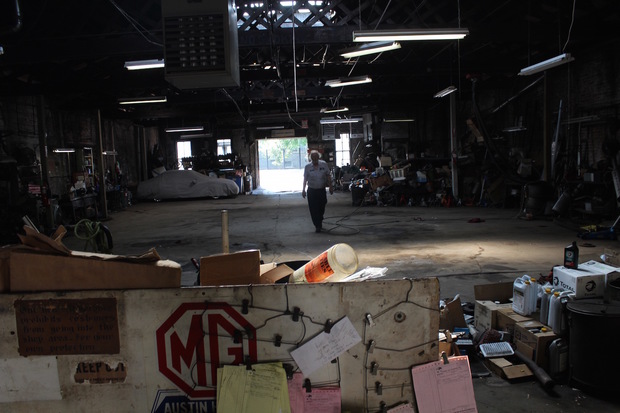 Though it's rare to see an MG at Foreign Car Hospital, the brand still has a presence in the shop.

Team Wink resigned from the raceways in 1973, and Julie Lester passed on the day-to-day of the garage to Pat Lay before she died in 1980.

Sales of MG cars also stopped in the United States in 1980, and Foreign Car Hospital developed its quirky standards for what it would fix as the cars became mothballed, but it also became a stronger business.

“The place never broke even; it wasn’t a viable business as long as the race cars were here,” Lay said.

The race cars were sold in the ' 70s, but the banners for MGs are still up in the shop, and Lester’s own car stayed in the garage long after his death.

Lester’s “Coup,” a lovingly customized and supercharged MG-A fastback outfitted with the front grill from a 1956 Studebaker Hawk, is perhaps his lasting legacy. The car is highly sought after by collectors and was last sold in the 1990s for $180,000. It was shipped to the new owner in the United Kingdom.

Lay, now 72, is still probably one of the best South Side mechanics to have worked on an MG, but he is the last to work under Lester and is thinking about continuing the tradition since 1910 of passing the garage on to the next mechanic.

On one recent day, Lay and Raoul were working on two Subaru station wagons, a minivan and a Honda Accord.

“It’s a lot of Japanese cars at this point, but it started with English, French and German cars,” Lay said.

The garage will continue despite the loss of its original owner and the cars he loved.