OLD TOWN — If a developer gets the approval it needs to tear down the former Noble Horse Theatre and build a mixed-use development in its place, the city will lose its last remaining riding hall — a once-thriving, valuable piece of the city's history, advocates say. 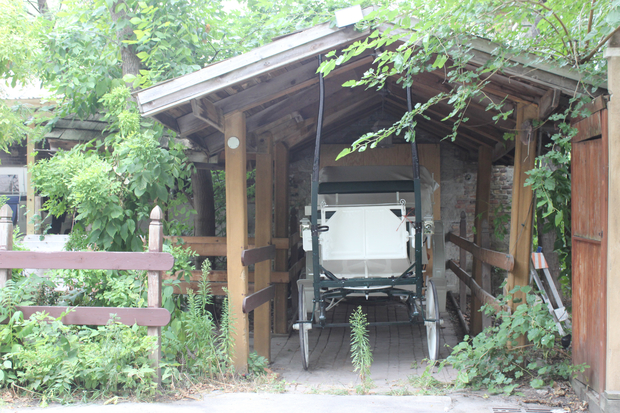 One of the carriages at the former Noble Horse Theatre. [DNAinfo/Mina Bloom]

On a recent afternoon, Burtt and a few other carriage drivers arrived at the stable to feed fewer than 10 horses before taking them Downtown, where people, including tourists and celebrities, typically go for carriage rides.

Back when it was first built, the riding hall hosted shows, riding lessons and rehearsals. Now all of its theater seats are turned on their sides. Its roof has gaping holes that let eerie beams of light into the otherwise dark and dingy arena. 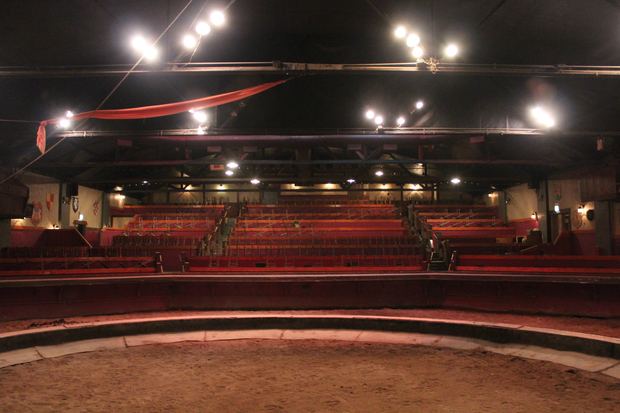 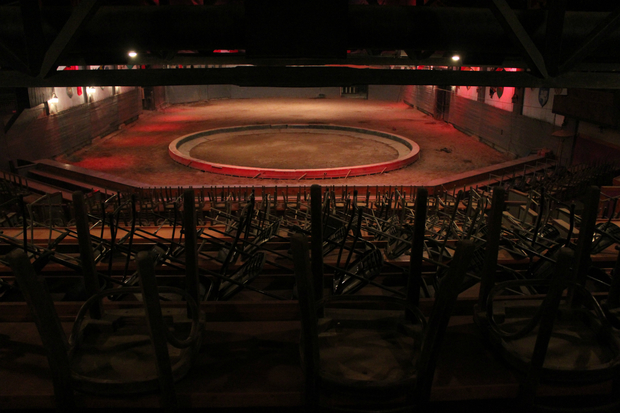 Theatre seating turned on its side in the riding hall, taken two years ago [DNAinfo/Paul Biasco]

Lacking the money for repairs, the carriage companies are prohibited from using the riding hall because the city deemed it unsafe, according to Jim Rogers, owner of Great Lakes Horse and Carriage.

Even though Rogers and Debbie Hay, owner of Antique Coach and Carriage, would like to make repairs and restore the entire site to its former glory, neither of them own the property.

Hay leases it from Sheldon Baskin, a real estate agent who runs Metroplex Inc. and also owns the nearby Marshall Field Apartment Homes complex. Baskin didn't immediately respond to a request for comment.

Given how desirable the huge property is to developers, Hay believes a teardown is inevitable.

"I don't have the money to rebuild. If I did, what would that investment get me long-term? It doesn't buy me more time," she said.

That was an opinion shared by Rogers, who said, "If this deal doesn't work out, there will be another."

"As things like carriages get pushed further and further back, there is a certain cultural element that will be lost. Once it's gone, it'll be gone forever," he said. 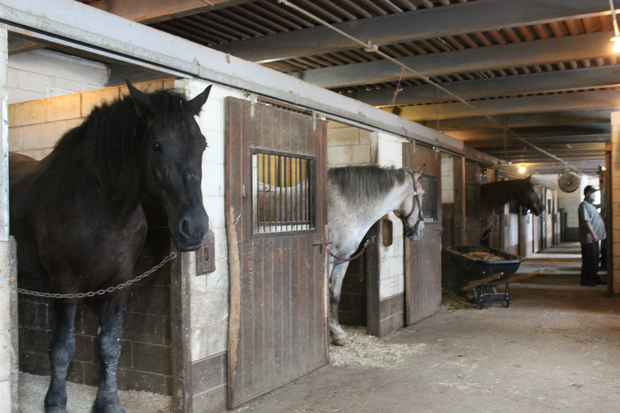 Inside the stables. [DNAinfo/Mina Bloom]

LG Development Group is seeking a zoning change to build a nine-story, mixed-use development on the former Noble site and an adjacent vacant lot in the 1400 block of North Orleans Street.

So far, the developer's plans have raised concerns among residents and Ald. Walter Burnett Jr. (27th), whose ward includes the development.

Some residents even formalized their opposition with a petition, saying the developer should stick to the property's current zoning designation.

Burnett said the average unit size was too small, and advised the developer to go back to the drawing board.

But Brian Goldberg with LG Development Group has said he's committed to the project, and wants it to move forward no matter the modifications.

"This is an area that needs something, and it's not going to be a park," Goldberg said at the last community meeting. "This is what we think people want. Maybe not adjacent neighbors ... but what we're trying to say is this: People want to live here."

So far, the developer hasn't bought the property, but Hay said Baskin is "entertaining his offer."

Back in 1871, when Noble Horse Theatre was first built, it housed as many as 60 coach and riding horses. It was a time when Chicagoans relied on horses for transportation.

In 1922, Noble underwent major renovations and its riding hall was transformed into an elegant riding academy, according to its website. It became known as Lakeshore Stables, where people could board horses, see performances and take horses for trail rides through Lincoln Park.

It wasn't until 1972 that the buildings began to deteriorate. The site sat empty until the 1980s, when it was used as a riding academy. By 1998, it was empty again.

The last renovation took place in 2000 thanks to a city grant, a group called Friends of the Stables and an investment from Dan Sampson, who decided to take over the property.

According to Rogers, the city forced Sampson to leave because he did not have proper licensing. George Steffee, who runs the foundation that owned Noble, told DNAinfo Chicago the city ticketed them so much that they couldn't make rent.

After Sampson moved out, Antique Coach and Carriage began leasing the property from Baskin.

"The location, [with] proximity to Michigan Avenue ... you don't get anything better," Hay said.

But she currently has a month-to-month lease, which she said puts her "on edge."

"It may not be an ideal piece of property in its current state, but it could be nicer if somebody wants to invest in it," Hay said.

In February, 13 of their horse carriages were destroyed in a fire. A message spray-painted on a nearby wall had Rogers speculating it was arson.

Hay is still struggling to recoup from the fire, saying "it's rough days here."

Burtt said if someone were to buy the property and restore it, there are "so many" opportunities for programming that would benefit the community, like therapeutic riding lessons.

She was recently approached by a professor at the Loyola University who was interested in bringing her students to the stable to interact with the horses as a way to practice negotiation techniques.

"It's a land gold mine and I understand that. But when does money begin to outweigh the need for something special [and] something unique? Not another glass building," she said.

Both Hay and Rogers admit that reviving the stables would require a ton of money, but it's something they'd love to see.

"Don't evict the current tenants. We're the ones holding on to it, we're the ones advocating for it. It was built for us," Burtt said.