LINCOLN SQUARE — The question on everyone's lips in Lincoln Square: What's coming to the storefronts across from Giddings Plaza? 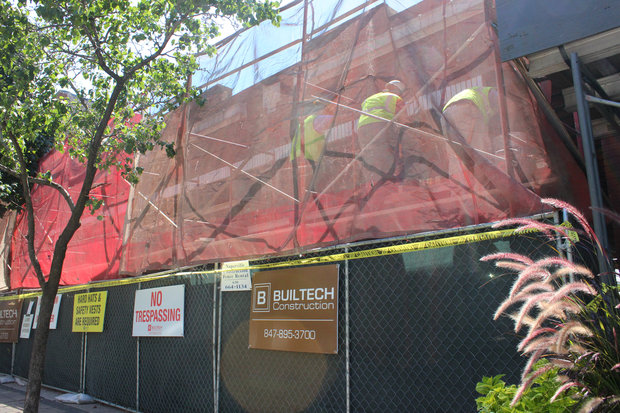 The store, which specializes in outdoor and "adventure" gear, will be the fourth Uncle Dan's in the greater Chicago area, and the second within city limits along with a location on Southport Avenue.

Owner Brent Weiss, who founded Uncle Dan's in 1972 with his brother Mark, said he's planning to open before the upcoming holiday (and winter coat) season. Timing is dependent on the buildout of the 5,700-square-foot space at 4724 N. Lincoln Ave. where Uncle Dan's is converting what were formerly three separate storefronts into a single unit.

The area "stood out as the epitome of the ideal neighborhood," said Uncle Dan's chief financial and operating officer Colin Moynihan, who used to live in Lincoln Square.

Three storefronts at 4724 N. Lincoln Ave. are being converted into a single 5,700-square-foot space for Uncle Dan's. [DNAinfo/Patty Wetli]

The company spent close to a year scouting available real estate, walking the neighborhood and talking to fellow business owners, according to Nicole Johnson, director of buying and merchandising.

Proximity to the Western Brown Line and the community's commitment to shopping local were key selling points, according to Weiss.

Though part of a chain, the Lincoln Square outpost will have its own identity, he said.

Certain merchandise is common to all Uncle Dan's but the rest will reflect the neighborhood's preferences, he said.

Uncle Dan's staff will be on hand at Thursday night's concert in Giddings Plaza, so feel free to put in a request for a specific piece of gear or clothing.

If there's one thing Weiss has perfected over the past 40-plus years, it's rolling with changing tastes.

Carpenter pants and overalls were hot items in the '70s when Uncle Dan's opened its first store — then called Uncle Dan's Army-Navy Store — at Bryn Mawr and Kimball. In the '80s, army pants with big pockets were all the rage.

"Today it's much more diverse," said Weiss, with merchandise ranging from luggage to gadgets to clothing in upscale brands like North Face, Marmot, Patagonia and SmartWool.

So how is it that Uncle Dan's survives as "the great outdoor store" in an urban setting like Chicago?

In part by being a "portal to travel," said Weiss, who's particularly proud of a photo of customers sporting Uncle Dan's t-shirts in Papua, New Guinea.

But there's also plenty of adventure to be found in the concrete jungle, be it running, biking, kayaking or power walking, added Stephanie Weiss, Brent's daughter and the company's marketing director.

"We want to make outdoor discovery easy in the city," she said.

Chicago's Bad Recycling Gets Worse: Only 10 Percent Diverted From Landfill

Dixie's Bucktown Days Over As Damen Restaurant Cancels All Reservations