ROGERS PARK — "Persons of interest" are being questioned by police following a Wednesday afternoon shooting along a sunny and highly-trafficked Morse Avenue, according to Ald. Joe Moore (49th).

The man was shot and wounded around 2:30 p.m. Wednesday, police said, near the Howard Area Community Center where the director of youth services recently told DNAinfo Chicago that children are in danger because of an "active gang war."

The shooting happened in the 1500 block of W. Morse Ave., according to Officer Thomas Sweeney, a Chicago Police spokesman.

In an email to residents, Moore said the shooter and victim "encountered each other on the sidewalk" when the shooter opened fire.

One of the people appeared to have an injury in his leg, she said. The woman said the victim and two other people, a guy and a girl, tried to get into the facilty but did not believe they were able to get inside.

She said at least one man came up and offered to help the victim.

"The police believe the latest shooting is the result of an ongoing dispute between two gang factions, fueled by social media where they exchange insults and post incendiary videos," Moore said. "When the members of the two factions happen to encounter one another on the street, violence sometimes erupts."

Moore said police are "closely monitoring" social media, and have asked for help from Cook County Sheriff's police and the Illinois Department of Corrections to quell the turbulent street violence.

Police originally said a "juvenile" had been shot, but later stated that a 24-year-old man was struck in his hand and leg and taken to St. Francis Hospital in Evanston in fair condition, Sweeney said. Moore said Thursday the victim's injuries were non-life threatening.

Moore said Wednesday evening that he was told by police that the victim is 22 years old, a fact restated in his email to residents, and that police have "some suspects."

According to police, the man is a documented gang member and a convicted felon on parole.

At least four shell casings could be seen on the sidewalk at the busy corner of Morse and Ashland avenues, directly under a blue light police camera, where officers had congregated on the scene Wednesday afternoon. Around the corner, the police forensic unit was on the scene. 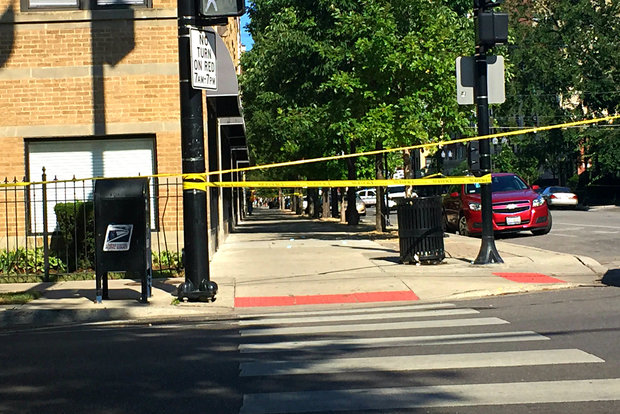 At least four shell casings were visible on the sidewalk at Morse and Ashland avenues Wednesday afternoon, directly in front of a local organization that helps families with children who have autism. [DNAinfo/Linze Rice]

The owner of a convenient store across the street from the scene said just before 2:30 p.m. about 3 to 4 customers were in the store when 2 or 3 gunshots rang out.

The owner said she was "not really" surprised at the brazen daytime shooting, because it "happens all the time" in the neighborhood.

Nearby gang activity has caused her to close her store earlier, at 7:30 p.m., "because they say [gun violence] usually happens at night," she said, but now she's less convinced.

"We have early store hours now because we don't want to get caught in the middle of this," said the store owner, who added that she fears becoming the victim of gun violence if she's in the wrong place at the wrong time. "But we can't be closed all day."

Other bystanders said they lived in the area blocked off by police, with one woman seeming shocked when told there'd been a shooting just feet from her apartment.

"A shooting? Oh great, I live right there," she said.

The shooting happened just a few storefronts away from the Howard Area Community Center's youth building at 1527 W. Morse Ave.

The area was nearly surrounded by yellow police tape, but a representative who came to the door said programs were not in service at the time of the shooting and that to his knowledge no HACC kids were injured during the shooting.

Earlier this week, Robert Conlon, director of youth services at HACC warned, "There is an active gang war going on," citing areas in Rogers Park where gangs Loyalty Over Cash and Insane Cutthroat Gangsters claim territory.

Conlon said there's "definitely real danger" for children to walk between Howard Street and Morse Avenue, and that the community center tries to offer services and transportation "wherever they can."

Moore praised Conlon and HACC's efforts in his email Thursday, saying, "It is this proactive approach to ending violence that ultimately will result in a safer neighborhood."

Earlier this week, Moore's Chief of Staff, Kevin O'Neil, said their office hadn't heard of complaints from HACC "in years" about troubles with gang violence, but on Thursday, Moore said his office "continues to support" the center and other local organizations.

The area from Ashland and Morse to the CTA Morse Red Line station was blocked off Wednesday afternoon and police were on the scene questioning several people in handcuffs.

One witness eating at the nearby Grill Inn restaurant said he heard several shots fired and looked out to see a man running east toward the train.

At least one man could be seen in handcuffs, standing against a police vehicle surrounded by officers. Police did not confirm an arrest immediately following the incident.

HACC's main building, about a mile away from its Morse Avenue youth center, is located north of Howard Street, an area that's been the site of several of this year's shootings in the area.

In June, two people were shot within hours of each other, one fatally, one block north of Howard on Jonquil Terrace. The fatal shooting occurred mere feet from school grounds at Gale as third-graders played outside during recess and was witnessed by both parents and students.

Police later arrested a 17-year-old for the deadly shooting — a teen who may have been the target of an earlier shooting that left car windows shattered — linking the victim and shooter to the ongoing gang war involving slain rapper Shaquon Thomas, aka Young Pappy.

In March another person was shot in an alley in the 7700 block of North Paulina, just blocks from the community center.

Conlon said facilities at Jordan Community School, between Howard and Morse, are also used by the community center.

In May, the 14-year-old son of an Uptown Ceasefire worker was wounded by a bullet on his hand while playing with friends in a nearby park following a basketball tournament. In July, a 36-year old homeless man identified as Kevin Davis was killed in the 7400 block of North Rogers Avenue, just over a block from Jordan.

In May, a 22-year-old man was shot in the 1300 block of West Greenleaf, a half-mile or less from the community group's Morse youth center.

See our map of every shooting in Chicago since 2010.