It's Official: NFL Draft Will Return to Chicago

DOWNTOWN — It's official: the NFL Draft, which drew 200,000 football fans to Grant Park this spring, will return to Chicago next year.

NFL Commissioner Roger Goodell and Mayor Rahm Emanuel made the announcement Tuesday afternoon as part of a league meeting in suburban Schaumburg. Next year's draft will be held from April 28 to April 30 here.

"We're thrilled. [Chicago] earned it," Goodell said. "The success we had last year I think set a new bar for the draft."

Goodell then presented Emanuel with a football helmet emblazoned with an NFL Draft logo. Emanuel quipped that he would "need it" for his city budget.

"You made the Second City the first choice again," Emanuel said. "The NFL Draft is a world-class event, and I’m glad they picked a world-class city like the city of Chicago."

Emanuel said he began lobbying for the draft's return as soon as the Monday after this year's draft ended, when he delivered a framed aerial shot of Grant Park's "Draft Town" festival to Goodell's office. 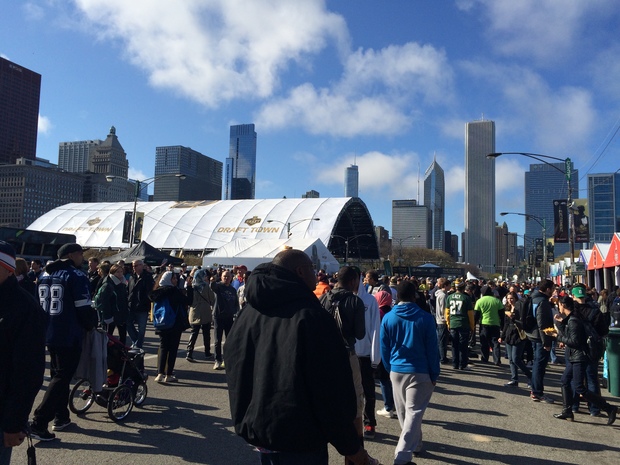 "Draft Town" in Grant Park during the first day of this year's draft. [DNAinfo/David Matthews]

This year marked the first time Chicago hosted the draft — which was historically held in New York — since 1963. The event included an unprecedented free outdoor fan festival in Grant Park called "Draft Town" that featured games and food.

Last year's draft experience in Chicago was fantastic. Excited that we'll be headed back there next year

Chicago's draft was heralded as a success that was popular with visitors and reportedly generated $100 million in economic impact for the city. But local officials' decision to waive nearly $1-million in park rental fees for the NFL, a $10-billion business, drew scrutiny.

The NFL Network earlier Tuesday reported that hosting the draft in Chicago again will hopefully make the event more of a national attraction, and one that would open up the draft to other cities.