CHICAGO — A softball tournament to honor Tom "Papa Hops" Hopkins will be held on Friday.

The tournament started last year as a way to remember Hopkins, who died from cancer, and raise money for charities. This year's tournament has already raised more than $16,000 and there are 28 teams signed up, topping last year's total of nearly $10,000 and 18 teams, said Liam Hopkins, Tom Hopkins' son and one of the event's organizers.

Money raised at the tournament will go toward helping families in the community who have been affected by cancer, youth athletics and doctors and organizations who are seeking a cure for melanoma, Liam Hopkins said.

"It's definitely grown tremendously already, just in that aspect," Hopkins said. "We'll still be seeing money, donations the day of the tournament and such."

Hopkins said the tournament's organizers were inspired to hold the event because "Papa Hops" ran a Sunday softball league at Kennedy Park. Hopkins and his brothers also wanted to find a way to bring the community together and support them in their same way their family received support after their father's death. 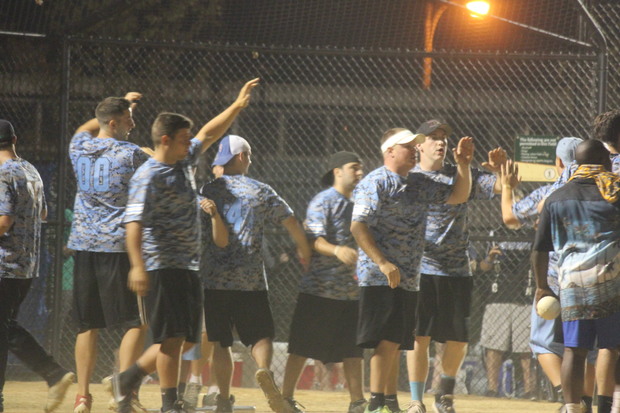 Teammates cheer each other on at the first Papa Hops softball tournament in 2014. The tournament returns on Friday. [Liam Hopkins]

The organizers hosted the first tournament at Kennedy Park and used some of the money they raised to buy a scoreboard for the park. The scoreboard will be unveiled before the championship game at 10 p.m. Friday, Hopkins said.

There will be cash prizes and trophies for the teams that come in first and second place. There will also be raffles during the tournament.