NORTH CENTER — The first time he met with then-newly elected Ald. Ameya Pawar (47th), Garrett FitzGerald, the late executive director of the Northcenter Chamber of Commerce, made a pitch to spruce up North Center's Town Square.

On Wednesday, Pawar announced that Town Square would become one of Chicago's first "People Plazas," part of a program intended to "activate" underused city land. 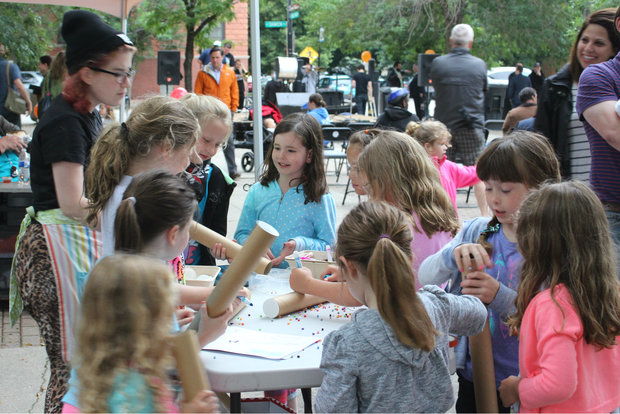 North Center's Town Square has been chosen as one of the city's first People Plazas. New activities will be added to the chamber's existing slate of events. [DNAinfo/Patty Wetli]

"Because of [Garrett's] advocacy, the city took notice," Pawar said. "You'll see the vision Garrett had start to come to life."

FitzGerald, who led the chamber for a decade, died in May after a battle with brain cancer.

Town Square, at 4100 N. Damen Ave. or "across from the CVS," currently plays host to North Center's summer farmers market and concerts as well as special events like the neighborhood's Easter Eggstravaganza, but lacks the charm and visibility of Lincoln Square's Giddings Plaza.

"If you're driving south on Lincoln Avenue, you don't even know it's there," FitzGerald told DNAinfo Chicago back in 2013.

Though specifics regarding the People Plaza have yet to be firmed up, Pawar said options could include hosting food truck corrals, pop-up retail and pop-up green space, all wrapped around the chamber's ongoing activities.

A kick-off event is being planned for July 31, with details to come.

"This is all what Garrett wanted," Pawar said.

Fittingly, the People Plaza news was shared during a ceremony that unveiled a pair of honorary "Garrett FitzGerald Way" street signs, which now bookend Town Square at Damen and Belle Plaine and at Lincoln and Belle Plaine.

"He leaves a legacy of dignity, leadership and friendship," said Michael Kane, president of the Northcenter Chamber's board of directors. "He loved this community and we know he is with us tonight and always."

FitzGerald's widow Alicia was overwhelmed by the tributes paid to her husband.

"I knew he was a part of the community but I never realized how respected he was," she said. 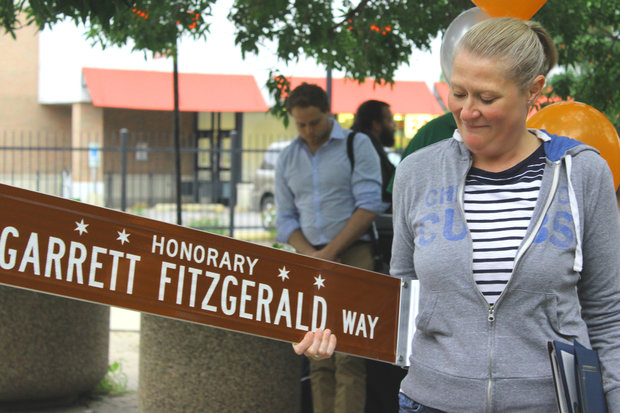 Alicia FitzGerald was given a replica of the street sign honoring her late husband. [DNAinfo/Patty Wetli]

The honorary street signs were particularly significant to her, a visible reminder of FitzGerald that the couple's daughter, Bridget, could treasure.

Garrett "always wanted to make sure she would remember him," she said. "It's definitely something I can show her that she can understand what he meant."

Garrett FitzGerald, pictured at a 2014 event with Toni Preckwinkle, was an expert political strategist, according to friends. [Facebook]