LINCOLN SQUARE — Chicago's minimum wage increased to $10 per hour Wednesday, and is on its way to reaching $13 an hour by 2019.

At Baker Miller, the future is already here. Owners Dave and Megan Miller recently boosted all of their employees' pay to $14 an hour, while also guaranteeing full-time hours, paid vacation and sick days. Ultimately they'd like to add health care for staff.

"It's a tight system, we don't make a lot yet," conceded Dave Miller, who along with wife Megan opened the Western Avenue bakery and millhouse in 2014. "I've run the numbers forwards and backwards many times — I don't want [the business] to collapse." 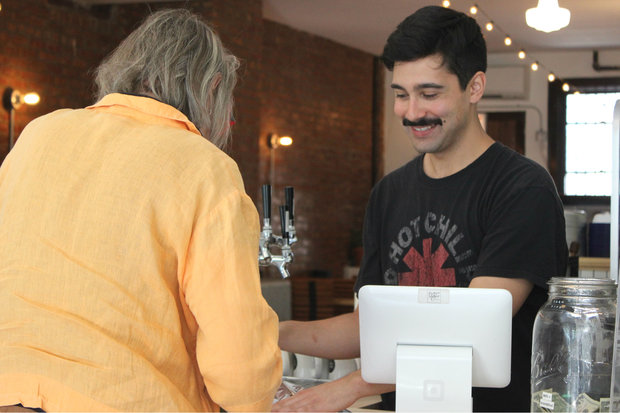 Baker Miller employees were already making $10 an hour, a wage Miller said was "totally reasonable" for business owners to pay.

He and Megan opted to up the ante to retain a team he called "hands down the best we've ever had," and also to establish a sense of equality and egalitarianism.

The dishwasher now makes the exact same wage as the line cook as the flour miller as the front-of-house cashier/server.

"None are doing more valuable work," said Miller. "The dishwasher is just as integral."

Patty Wetli discusses the wage hike and its effect their bottom line:

To offer $14 an hour, the Millers are cutting into their profits, which Dave said was "not a huge sacrifice."

"Five years ago, Megan and I were working in coffee shops, so our standard of living is not high," he said. "The CEO who's making 500 times more than employees — how do you justify that? Everyone's working hard."

Make no mistake, the Millers are still running a for-profit operation. Their hope is that some forthcoming changes aimed at making their food more affordable and more accessible — sandwiches! — will encourage more frequent business from existing customers and broaden their appeal to people who've yet to give the bakery a try.

"It's a big bet that our customers will help us ... if you want to support a business with an ethos you believe in," said Miller. "But it only works if your food is good and the atmosphere is good."

On top of the hourly raise provided by the Millers, employees at Baker Miller voted to pool tips, which previously had been collected solely by the front-of-house staff. 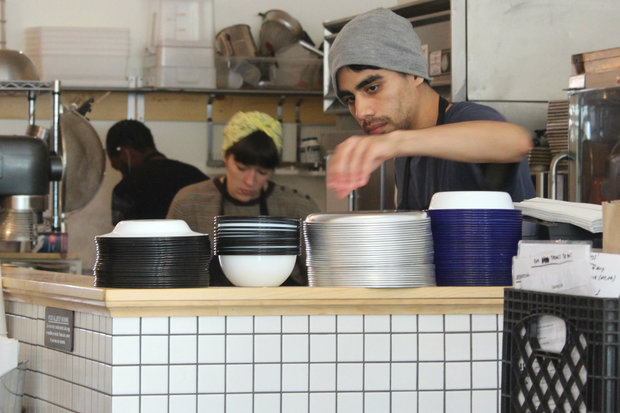 Anthony Monge, a cook at Baker Miller, is one of the staff members benefitting from the pooled tips. [DNAinfo/Patty Wetli]

"It's about being part of the whole instead of every man for himself," Miller said.

He estimated the tips add another $2,000 to the monthly staff kitty, divisible by a dozen employees — nine at the bakery, three at Baker Miller's flour mill.

Michael Wallace was one of the front-of-house staff members who had to buy into the Millers "all for one" mentality, giving up as much as an extra $150 a day in tips.

"It's like somebody saying, 'We're going to give everyone else money and taking from you,'" said Wallace.

He agreed to the cut because "when I package a pie, it's everyone who was involved. Somebody folded the box, somebody made the crust. Your tip is rewarding everybody, not just the guy who smiles," said Wallace.

"It makes it where we're all part of the same team, working toward the same goal," he said.

Anthony Monge, a cook at Baker Miller, is one of the staff members benefitting from the pooled tips.

"I feel like normally the front of house and back of house are divided," said Monge. "We always work as a team."

The boost in pay and the addition of tips will make a significant difference, Monge said.

The Millers debated whether to go public with employees' wage hike, and cleared it with staff before sharing the news on social media.

"It's intentionally to make a statement," said Miller, who suspects there are other small businesses compensating their staff on the same level as Baker Miller.

The "less transparent" owners like him are about employee wages, he said, "the easier it is for the big guy to win and say it's not possible."

We have good news ya'll! And we wouldn't be able to do it without your support. Thank you so very much for being such...