BOYSTOWN — With this year's Pride Parade and aftermath resulting in more arrests than last year but possibly less public intoxication, city officials must now determine the future of the Boystown parade.

Police said 52 arrests were parade-related, up from 45 last year. Charges included mostly misdemeanor charges of reckless conduct, disorderly conduct and battery, police said Tuesday. Arrests during the parade itself also increased from eight in 2014 to 15 this year, although that includes eight people arrested for failing to obey a lawful order to disperse during a #BlackOutPride protest that briefly halted the parade. 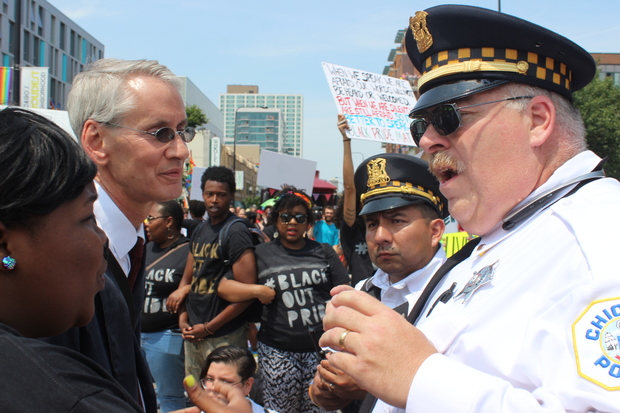 Police talk with an organizer (far left) of the #BlackOutPride protest, which briefly halted the 2015 Chicago Pride Parade at Halsted and Addison streets. [DNAinfo/Ariel Cheung]

At least 15 people received citations for drinking on the public way, having alcohol in a park, disorderly public intoxication, smoking on the CTA and other alcohol-related issues, police said.

Citations are still being tallied, as many are recorded on paper tickets instead of electronic files, said Officer Janel Sedevic, a Chicago police spokeswoman. Last year, 230 citations were part of a similar crackdown on public drinking, a significant increase from the 10 written in 2013.

Parade organizer Richard Pfeiffer said since Sunday, most of the feedback he'd gotten suggested there were fewer people with coolers or open containers of alcohol during the parade.

"I don't think we expected this to change overnight. We have two different issues. What goes on during the parade and after, that's night and day. During the parade, we have alcohol problems and feistiness, but much of the problems happen after the parade leaves," Pfeiffer told DNAinfo Chicago.

Ald. Tom Tunney (44th) will be reviewing the parade with city departments in an upcoming meeting, but "no decision has been made at this point whether or not the parade will stay in Lakeview," his spokeswoman Erin Duffy said in an email. With officials waiting until April to announce the parade's location this year, it is unknown how long a decision will take for 2016.

Tunney and neighboring Ald. James Cappleman (46th) said in April that without "serious improvements," the parade would be moved out of Lakeview after 2015. Despite attempts to limit the parade length and public drinking, the parade stretched over four hours Sunday, and celebrations continued until police closed down bars around 12:30 a.m. 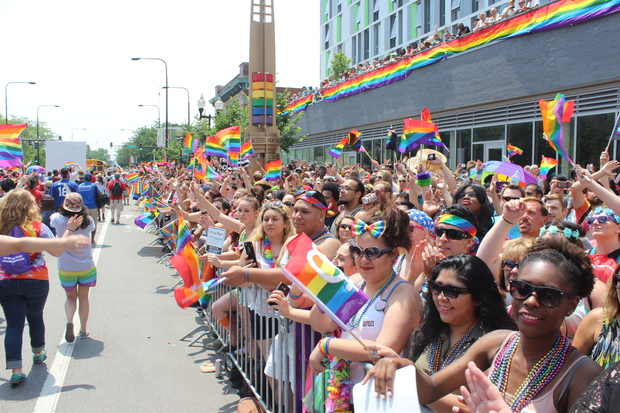 Still, Lakeview officials and parade organizers found this year's parade to be calmer and more organized, largely in thanks to an increase in police presence and 110 additional off-duty officers hired by Pfeiffer and the Northalsted Business Alliance.

"Richard Pfeiffer and his team are to be commended for going the extra mile and hiring 90 off-duty security folks to help support CPD. I was very, very pleased with our team, and certainly, I think they did a good job of ensuring people were moving along the street appropriately," said Christopher Barrett Politan, executive director of the Northalsted Business Alliance.

While Pfeiffer's security stayed for about two hours after the parade, the 20 Northalsted officers were on hand until about 6 a.m., Barrett Politan said. He added that the alliance was "extremely pleased" to have the parade in Boystown, and he felt the measures Northalsted recommended to parade advisory board — specifically the alcohol checkpoints — were a success.

CPD did a "very good job in getting the streets back to vehicular traffic fairly expeditiously" following the parade, Barrett Politan said.

Pfeiffer said there were fewer gaps in the procession this year, and while it was about the same length as last year, he said it would have ended about 15-20 minutes sooner if not for the protestors and the reckless driving incident.

Tunney's office did not immediately comment on how many complaints it received from ward residents in the days after the parade.

The question of whether the 46-year-old parade has outgrown Boystown has been floated for several years, but moving the 21-block parade to a four-block area downtown would still not eliminate post-parade mayhem in Lakeview and Uptown, Pfeiffer said.

"You have a whole new crowd of people who come because the nightlife strip is there for them to party. You could move it north, south, east or west, and you'd still have those same problems because that's the nightlife strip, and those often have higher rates of arrest in general, but especially during special events," Pfeiffer said.

On Sunday and early Monday, two people were arrested on felony charges, including one for recklessly driving his vehicle into the parade route and injuring two attendees. The man was later released without formal charges and taken to the hospital for a mental evaluation.

During the parade but a few blocks from the route, police said a 16-year-old fired shots at officers. The juvenile was charged with three counts each of attempted first-degree murder and attempted murder of a police officer, six counts each of aggravated discharge of a firearm and aggravated assault, two counts of aggravated unlawful use of a weapon and one count of unlawful possession of a firearm. He is set to return to court July 30.

Almost two hours after the parade ended, a 19-year-old woman was shot in the 1000 block of West Wilson Avenue in Uptown, although Ald. James Cappleman's office (46th) was unable to say whether parade attendees were involved in the shooting.

Later that night, a 24-year-old man was stabbed multiple times in the 1000 block of West Belmont Avenue. The Crime in Wrigleyville + Boystown blog reported a second stabbing a half-hour later at Halsted and Aldine. 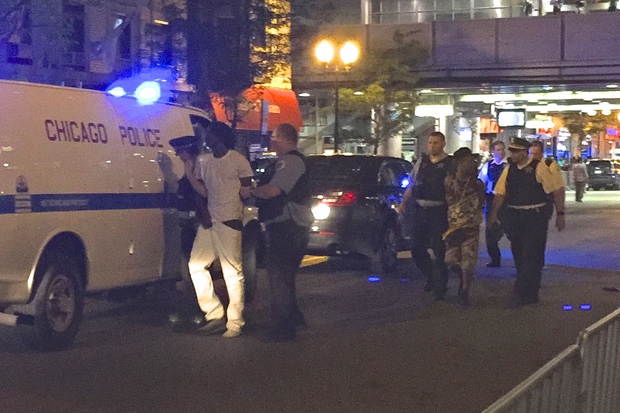 Two men are detained after at least one fight broke out near the Belmont Red Line station after the 2015 Chicago Pride Parade. [DNAinfo/Ariel Cheung]

After fights broke out and huge crowds formed on portions of Halsted Street and Belmont Avenue, police attempted to disperse them by forming large lines of officers to herd the crowds south.

Organizers of the parade promised a "very large police force" to maintain order, but it took officers more than four hours to respond to some police calls, according to dispatch audio released by the Crime in Wrigleyville + Boystown.

Police and Tunney's office had no comment on the reported wait times.

Neighbors will have an opportunity to discuss crime enforcement over the last month during Wednesday's community policing meeting at 850 W. Addison St. The 7 p.m. meeting covers Town Hall District beats 1923, 1924 and 1925, which include the area of Lakeview east of Southport Avenue and between Irving Park Road and Belmont Avenue.