LINCOLN SQUARE — At nearly 100 years old the Davis Theater could use a makeover, and no one is more aware of that than owner Tom Fencl.

"I know from standing at bus stops that a lot of people don't come here because of the bathrooms," he said. "We did a deep cleaning, but they're run down."

Fencl has drawn up a $4 million renovation plan for the Davis that includes not only new restrooms (ADA-accessible! Baby changing stations! More than one hand dryer!) but a state-of-the-art sound system and the conversion of two of the building's four theaters to stadium seating. 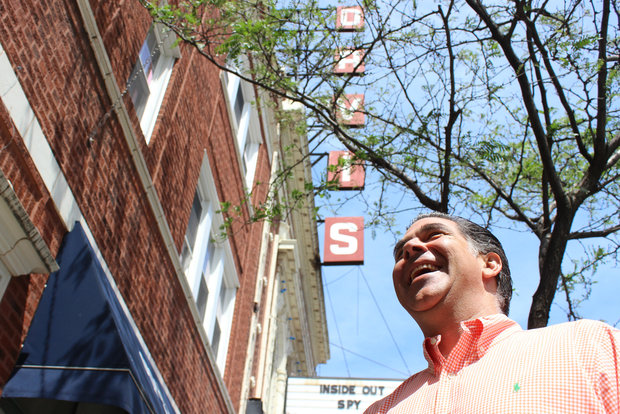 Tom Fencl, owner of the Davis, considers himself the custodian of the 100-year-old theater. [DNAinfo/Patty Wetli]

The addition of a restaurant/bar will be accomplished by busting through the lobby wall behind the box office into the storefronts next door, which are all part of the same building and run parallel to the theaters. They were formerly occupied by Ravenswood Used Books and La Bocca Della Verita.

Pending building and zoning permits as well as financing, work could begin this fall on the renovation, necessitating a six-month closure.

Fencl's hope is that short-term pain translates into long-term gain.

The changes are aimed at modernizing the Davis, 4614 N. Lincoln Ave., in order for the independent theater to remain competitive with the city's many megaplexes. But Fencl also to intends to restore a portion of the theater to its 20th century glory as a nod to its historic past.

The building's rear two theaters will be combined into a single auditorium — the screen will double in size — and the decor will hearken back to the early 1900s. So yes, if you're keeping count, the new Davis will have three screens instead of four.

"You're going to get the visual of what it was like 100 years ago," Fencl said of the retro auditorium.

Or more like a reasonable facsimile thereof. Despite combing through various archives, he's yet to unearth a single image of the Davis from its earliest days.

Poking around the theater's nooks and crannies Fencl did come across one unexpected find: organ pipes.

The Davis, originally a vaudeville house with a single screen and stage, was once home to a Wurlitzer organ. Though the keyboard is long gone, full sets of pipes remain and will be incorporated into the theater's vintage design.

Those pipes and the theater's towering "Davis" sign are two of the features that earned the building landmark status last week. 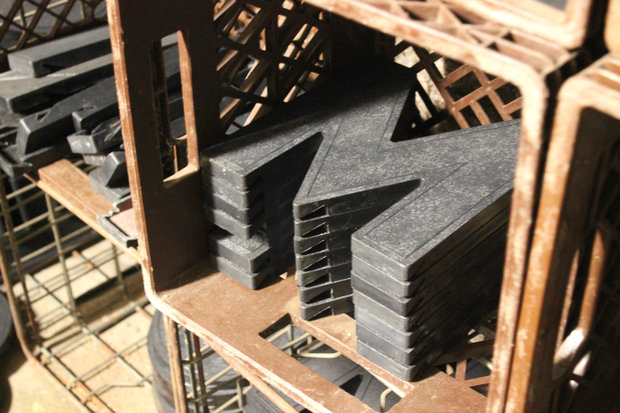 The Davis is getting a makeover, but for now, and possibly for the future, its marquee will be hand-lettered. [DNAinfo/Patty Wetli]

Fencl had been pursuing the historic designation for more than a year as part of his plan to finance the renovations.

"The Logan Theatre got a million in TIF. We're not in a TIF [district]," he said of obtaining Tax Increment Financing dollars.

"The city of Chicago said, 'No, you're not a landmark.' The state of Illinois said, 'No,'" Fencl said. "Now for the good news ... the National Park Service went and said, 'You are on the national registry and you will get a 20 percent tax credit.'"

Though the 20 percent break was, in Fencl's words, "a big deal," so was the validation of the Davis' importance to the community.

"When national said, 'You have something worth saving,' it was reassuring we were going down the right path," Fencl said.

There are strings attached to the landmark approval, though. For one thing, exposing those organ pipes, which started out as just an idea of Fencl's, is now a Park Service requirement, he said.

So is maintenance of the theater's sign, which will be restored to include its former uplighting under each letter.

"It's such an identifiable thing in the neighborhood," he said.

Lincoln Square was once home to five theaters, built shortly after World War I. They're all gone now except the Davis, which was originally named the Pershing, after Gen. John J. Pershing, commander of U.S. troops during the Great War.

The Davis itself survived a bid for redevelopment as recently as 1999, with Fencl, a former accountant turned real estate investor, purchasing the theater from a preservation group. 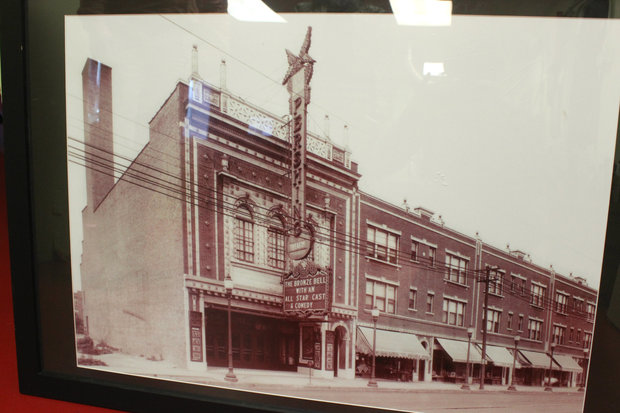 A framed photo of the Davis, then called the Pershing, circa 1921. [DNAinfo/Patty Wetli]

"I just feel like I'm a custodian," he said. "If you ask anybody about Lincoln Square, they mention the Davis. In small towns, movie theaters are a cornerstone. We're part of what gives Lincoln Square its hometown feel."

In 2011, he spent hundreds of thousands of dollars to equip the Davis with digital projectors as studios stopped producing film reels. The costly investment put many other indie and drive-in theaters out of business, according to Fencl. 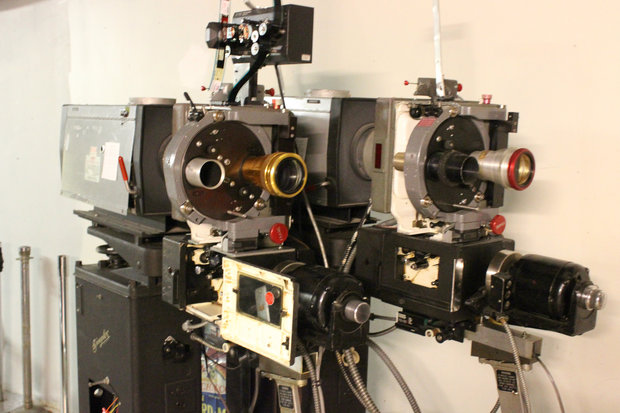 Film projectors from the 1940s were replaced by digital models. These oldies will be used for reel fests. [DNAinfo/Patty Wetli]

Having outfitted the theater with modern projection technology, Fencl decided to double-down on efforts to bring the rest of the Davis into the 21st century.

New seating, decor and bathrooms are part of that gamble, but his real bet is on the restaurant/bar — still very much in the conceptual phase — to carry the Davis toward permanent sustainability.

Ticket sales don't support theaters — they support movie studios. Concessions are a theater's real bread and buttered popcorn, and what is a restaurant but a giant concession stand?

Tentative plans call for the 3,000-square-foot eatery to serve lunch and dinner, with a full bar. The intent is to grab moviegoers before and after shows, as well as to "just be a neighborhood joint to get a bite to eat or something to drink," Fencl said. 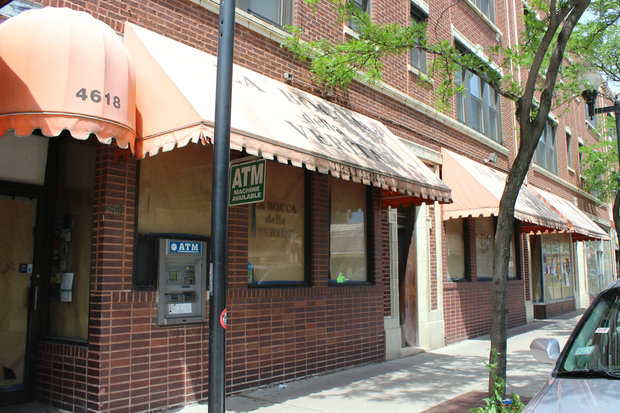 What's behind the brown paper? The Davis Theater will be expanding into vacated storefronts next door, adding a restaurant and bar. [DNAinfo/Patty Wetli]

Fencl fully understands that not everyone is going to welcome the changes.

"There's going to be that handful of people when we're done who will say you've ruined the place," he said, but added that the concept is where theaters are heading.

"Our goal is to have this" — pointing to an architectural drawing of the restaurant — "fund this," Fencl said, as his hand swept across the theater.