NORTH CENTER — Just at the point it was riding high on the success of its critically acclaimed premiere of "The Project(s)," a dazzling work of original documentary theater more than five years in the making, American Theater Company was brought low by the unexpected death of its charismatic artistic director PJ Paparelli.

ATC, 1909 W. Byron St., now faces the daunting task of not only carrying on with day-to-day operations but also preparing for a future without Paparelli, who died in late May from injuries suffered in a car accident while on vacation in Scotland.

"Many of us have thrown ourselves into making sure the theater moves forward, even though we're all personally grieving at the same time," said Sarah Slight, ATC's literary and grants manager. 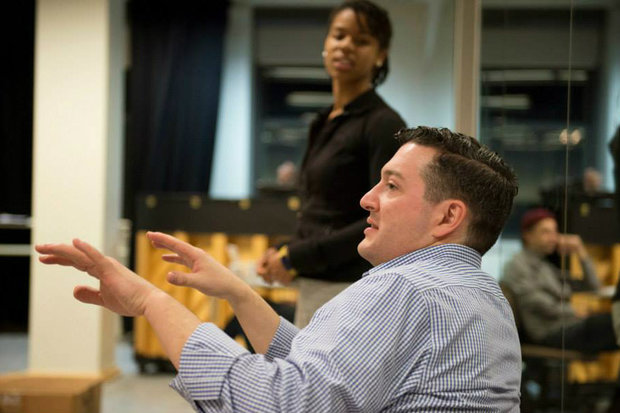 ATC ensemble member Kelly O'Sullivan described Paparelli as "captain of the ship" at ATC, involved in "every single decision from top to bottom."

He possessed both an outsized talent — "I just have never met anybody in my life with such dogged pursuit of truth and excellence" — and personality, she said.

"He had the quickest wit and was so impish and mischievous," O'Sullivan said. "He had a really wicked, contagious sense of humor. That was such a huge part of how he understood the world — people vacillating between being really fun and sad."

"It's an enormous absence," Metzgar said. "It's just impossible to imagine the space without him."

Before he left on his vacation, Paparelli had tentatively scheduled the 2015-16 slate of productions, some of which he had slotted himself to direct.

"This will be a legacy season. All I'm doing is facilitating the vision that was already in place ... wanting the season to be a tribute to his work," Metzgar said. "It is all a big exercise in 'What would PJ do?'"

Metzgar first met Paparelli in the 1990s at New York's Public Theater and their paths crossed again when she joined About Face in 2008, a year after Paparelli took over the helm at ATC.

The two collaborated on productions of "Hedwig and the Angry Inch" and "Rent" as Paparelli strove to make ATC more inclusive in terms of subject matter, casting and its audience, believing the American Theater Company should reflect all of America.

"PJ wanted the world outside in Chicago to appear inside [ATC]," Metzgar said.

"The Project(s)," which tells the story of public housing in Chicago, represents precisely the type of work Paparelli wanted ATC to either commission or develop on its own, but he was initially reluctant to tackle the topic.

Back in 2008, with barely a year at ATC under his belt, Paparelli was approached by Suzanne Connor of the Chicago Community Trust to gauge his interest in creating a play about the city's public housing.

As he hesitated, Paparelli was reminded by his friend Derrick Saunders of Congo Square Theatre that he was first and foremost a documentarian, who counted among his credits "columbinus," a documentary-style play about the Columbine shootings. An outsider, Saunders suggested, might provide welcomed objectivity.

Working with co-writer Joshua Jaeger, Paparelli spent the next five years researching public housing in the U.S. and abroad, sought out scholars in urban planning and interviewed more than 100 residents of Chicago's low-rise, mid-rise and high-rise projects, taking pains to include individuals of different generations.

O'Sullivan tagged along on some of the interviews and was impressed with his technique, "how he went in and it was more just like conversation, not set questions."

From 6,000-plus pages of transcripts, Paparelli honed his narrative, finding themes of resilience and tenacity but not shying away from violence either.

"I was talking to people who killed people," he said in the April interview. "What broke my heart over and over again, especially with gang members, was, 'Oh my god, you're so smart, so intelligent.' But they're trapped."

Ultimately he narrowed his focus to a dozen families, with whom he conducted another six to seven months of in-depth interviews.

"You go back so many times, they are all friends of mine," Paparelli said.

The final work, which premiered in late April, is divided into three acts — hope, hell and home.

Sparsely staged, the production places primary emphasis on the text, along with the emotions behind the words: from the pride felt by the projects' earliest residents — "Oh lord, it was so beautiful and it was ours" — to the anger of those who lived through CHA's darkest days — "Were the projects good for my family? Hell no. The only reason I'm alive is I went to Vietnam." 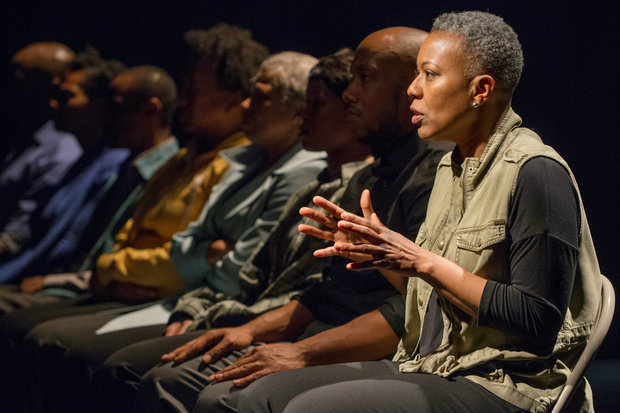 Penelope Walker, in the role of Annie Smith, recounts one of the darkest moments in Chicago Housing Authority history: the 1994 death of 5-year-old Eric Morse. [Michael Brosilow]

That the dialogue is taken verbatim from interviews lends it even greater power.

"I certainly can't say I speak for the residents — I don't," said Paparelli. "That's why they speak for themselves."

A number of residents represented as characters in the play were on hand for a special performance of "The Project(s)" in early May, part of Paparelli's insistence that the theater experience shouldn't be "dominated by Caucasians of a certain class."

"It was our lives," said Beatrice Harris, who features prominently as one of the activist residents of Wentworth Gardens. "I want people to understand that we had a lot of hard times and a lot of good times. I wouldn't want to live nowhere else."

"Unplugged" versions of "The Project(s)" were also mounted May 17 at Jenner Elementary, in the shadow of Cabrini-Green, and Wentworth Gardens on May 24, just days after Paparelli's passing. The road shows were part of pact Paparelli made with Wentworth's Hallie Amey, who died in 2011.

"The community showed up," said Slight. "It was a really important moment."

That Paparelli lived to see "The Project(s)" come to fruition is of some consolation to the ATC family.

"We have this incredible show that was a labor of love," Metzgar said. "It will have a life."

Still it's been difficult for ATC staff to sit through the remaining shows of "The Project(s)" run given its strong association with Paparelli.

Cast members were given the option not to perform the night Paparelli's death was announced, but all agreed to take the stage.

Equally difficult to accept is the loss of the work still to come, said O'Sullivan.

"We all couldn't wait to see what he would do next," she said.

Working with Paparelli on an updated version of "columbinus" was a "singular theatrical experience," O'Sullivan said. "He had such a strong, unique artistic voice."

ATC's next artistic director won't be expected to fill Paparelli's shoes — "They only made one of him," Metzgar said — but will have a powerful legacy to build on. 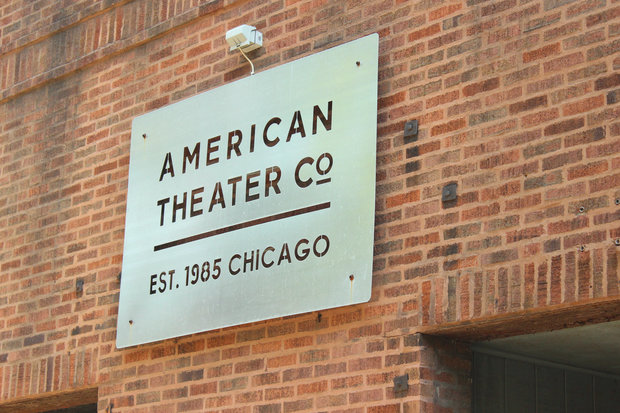 Paparelli used the theater's mission of "what it means to be an American" as his guiding light, and if his successor is similarly anchored by that statement, ATC will be fine, O'Sullivan said.

"PJ was wonderful about never veering from that question," she said. "It's not just about crafting a season to entertain but showing all the good, the bad and the ugly."

Paparelli also turned ATC into a hub for emerging talent, mentoring young producers, writers and actors, and encouraging members of the ensemble to become involved in all aspects of a production.

"He would always ask us if there were plays we were interested in, were we writing anything," O'Sullivan said.

When she expressed an interest in directing, he took her on as assistant for ATC's production of "Sons of the Prophet" in 2014 and tapped her to helm this summer's Youth Ensemble production of "Greensboro: A Requiem."

"I don't know what I believe in terms of fate, but it feels like a final gift from PJ," O'Sullivan said. "To heal by continuing his work."

Paparelli is survived by his mother and two brothers.