LINCOLN SQUARE — For most people living next to a house undergoing renovations, it's the noise that gets to them — the constant cacophony of hammers, saws and drills.

For Carrie Hoffman, it's the silence that infuriates.

"I wish it was noisy," said Hoffman. "That would mean something was actually going on." 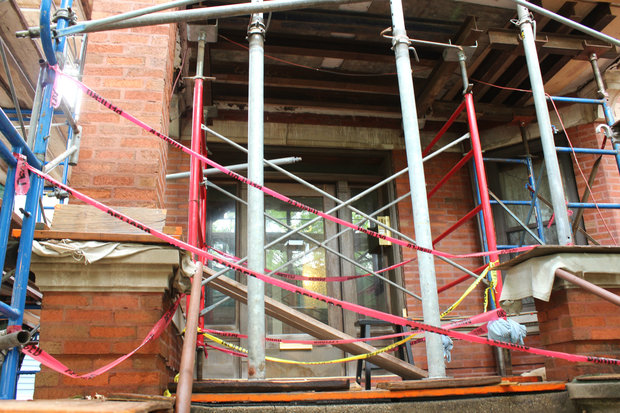 Six months of scaffolding and no end in sight has neighbors frustrated. [All photos DNAinfo/Patty Wetli]

It's been six months since the scaffolding went up at 2419 W. Wilson Ave., the brick three-flat immediately adjacent to the house Hoffman shares with her husband Jay.

"There is no work being done. Zero. Nothing," she said. "We want it to end. My god, it just keeps going and going and nothing's being done."

The Hoffmans are fed up with the sidewalk being blocked, their yard thrown into chaos and barricades preventing parking in the street. 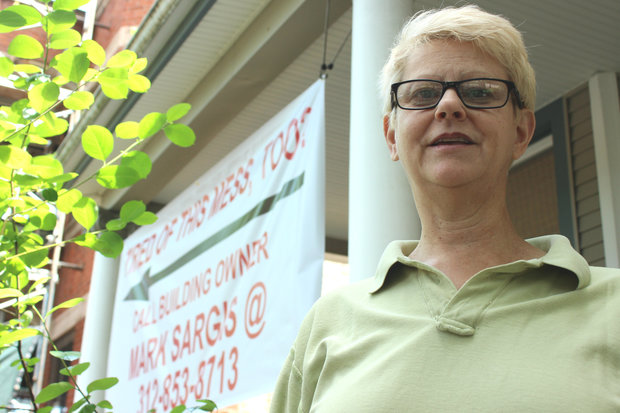 Carrie Hoffman is fed up with the construction, or lack thereof, going on next door.

Complaints to the city, Ald. Ameya Pawar's office (47th) and the three-flat's owner, Mark Sargis, have fallen on deaf ears, she said.

So the couple have gone extremely public with their frustration, sending a message, large and clear, in the form of a giant banner they hung from their front porch Sunday night. 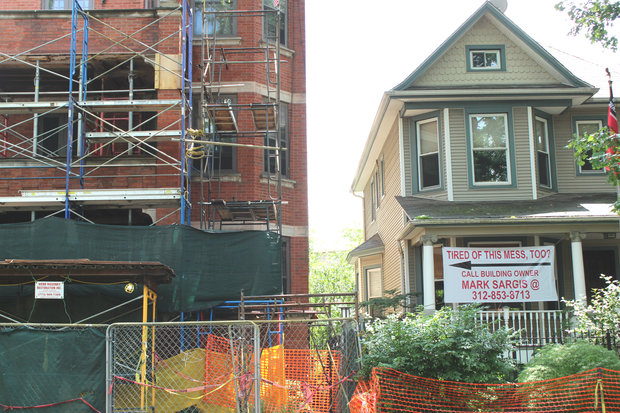 Neighbors are sending a message large and clear to the owner of the three-flat on Wilson Avenue.

"Tired of this mess, too?" asks the improbably grammatically correct sign.

An arrow points to the three-flat and encourages passersby to call Sargis, listing the phone number of his Wheaton law practice.

"I'm going to pay them 30 bucks for half," said Alie Harmon, who lives in the house on the opposite side of three-flat.

Harmon's side access to her back yard has been cut off by the scaffolding, which encroaches several feet onto her lawn.

The building owner tells Patty Wetli there have been major delays:

Scaffolding for the three-flat has spilled over onto a neighbor's property, blocking the walkway to the house's back yard.

"According to property laws, he can do this," Harmon said. "I'm cool with reasonable access if he's done the work. Is seven months reasonable?"

Her 5-year-old daughter has to go through the alley to bring her bike out of the garage, and Harmon's mother-in-law, who has mobility issues, can't get her walker or wheelchair through the narrowed side passage.

Aside from the inconvenience to her own family, Harmon said she's worried for the safety of the neighborhood's children, many of whom walk along Wilson on their way to Waters Elementary to the west or Queen of Angels to the east. 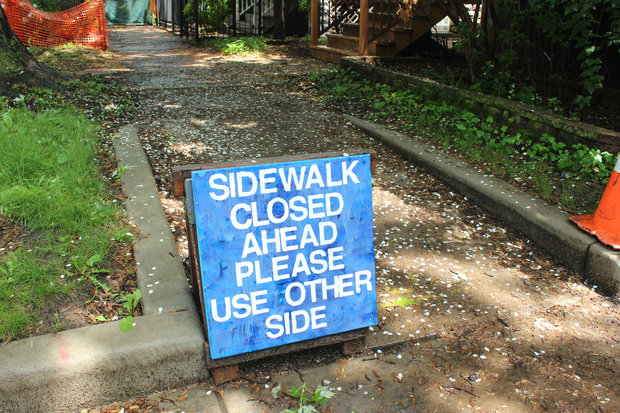 Blocked sidewalks are a hazard to the neighborhood's children, residents say.

The blocked sidewalk on this busy stretch of Wilson, just off Western Avenue, is "causing kids to make strategic decisions" about how to get around the construction, she said.

"It starts to become more natural to cut through the street" instead of crossing at a corner stop sign, said Harmon. "It scares the heck out of me. I'm a mom, those are my friends' kids."

"The bottom line is, [Sargis] is not moving the process forward," she said. "There's no reason it should be going on this long without any work being done."

Sargis, who is traveling out of town, responded to DNAinfo via email.

Work is being done, he insisted, in the form of stabilizing the building's crumbling balconies, obtaining the appropriate permits for repair work and commissioning a structural engineer to draw up plans to restore the three-flat's facade.

"We are making every attempt to save as much of the original brick facade of this beautiful building as possible, rather than installing a cheaper and more utilitarian solution," Sargis said. "This is not an easy task and it is much more involved than, say, repairing a roof." 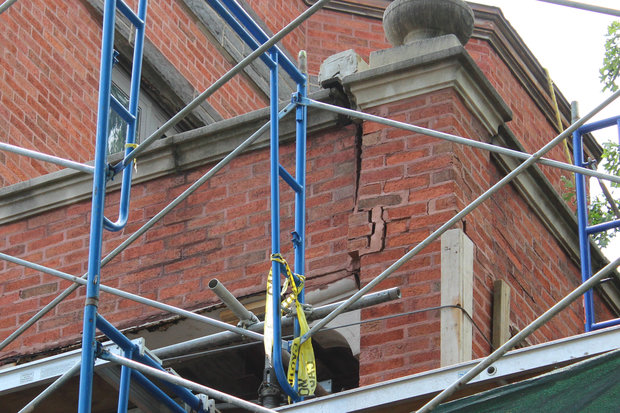 Why so much fuss? Deteriorating brick work.

Parody of a Construction Site

"I noticed a little brace holding up the porch, which was starting to shear off," said Nina Sandlin, who's lived in a two-flat at the end of the block in question since 1992.

The stuff included scaffolding, "keep out" tape, fencing, orange sheeting to shield the parkway and a wooden canopy over the sidewalk.

"I think the most amazing thing to me is the dreamlike way the site has evolved," said Sandlin. "It's not a classic construction site. It's a slapped together parody of a construction site, visually." 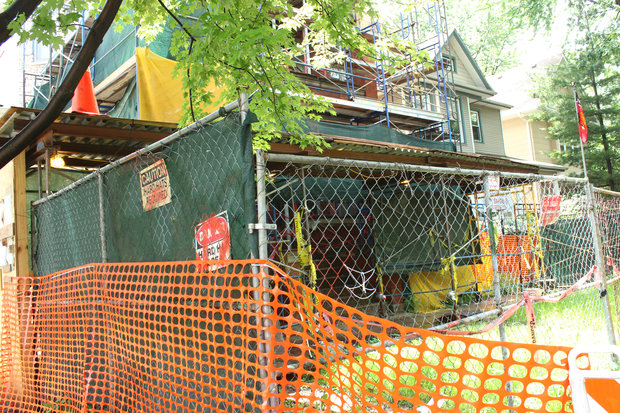 As the project has expanded in scope, so has the construction site.

The piecemeal approach is due to the project's change in scope and efforts to make the site "safe and safer," according to contractor Dan Webb.

"I did not want to have to close the sidewalk," he said. "I completely understand Jay and the poor lady next door."

Despite the site's haphazard appearance, Webb and Sargis have applied for and received all of the appropriate permits, said Ernie Constantino of the 47th Ward office. 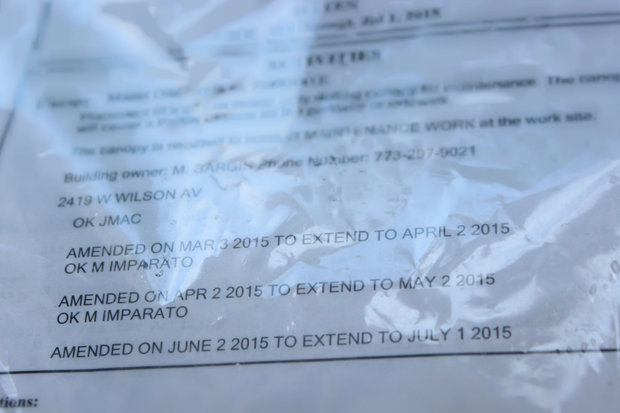 Permits have been renewed several times but are up to snuff.

Constantino said he's been in contact with the various city departments involved and "everything is on the up and up."

"I wouldn't want to live next to it either," he said. "But the owner has to go through a process."

According to Sargis, the engineering plans are now complete and were submitted to the city for review, which can take several weeks.

"I hope work can start as soon as possible — after city permit review — and I'm told remaining work should take two to three more months assuming all goes well," he said.

Bring on the hammers, drills and saws, Carrie Hoffman said. 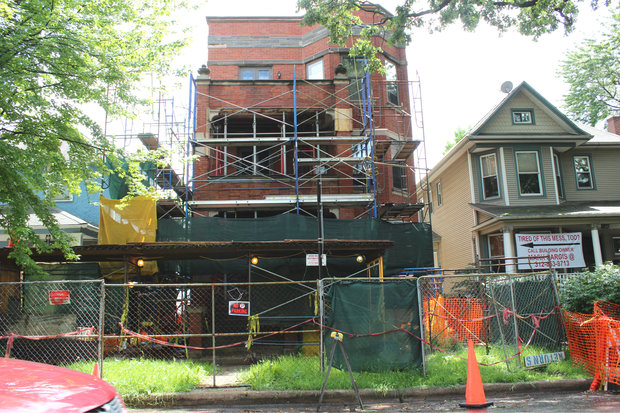 Neighbors want a return to normal. What's normal? See below. 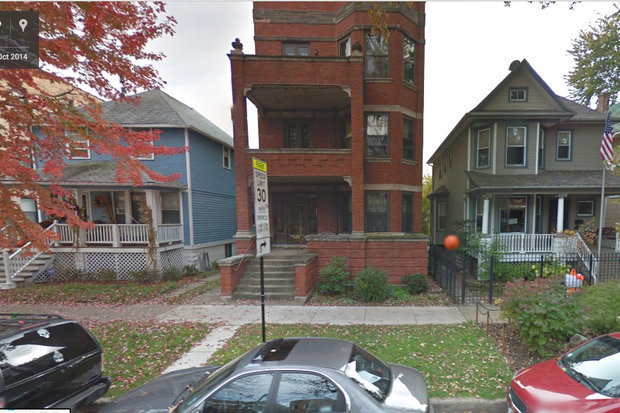