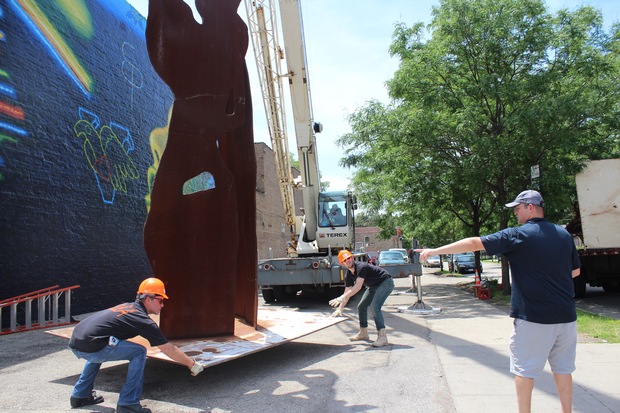 JEFFERSON PARK — Two Bridgeport natives moved to Jefferson Park Wednesday — and you won't be able to miss them.

Two gargantuan steel sculptures by the Zhou Brothers — who led the rebirth of the Bridgeport art scene — were installed Wednesday outside the Ed Paschke Art Center as part of a crosstown cultural exchange designed to use art to connect two working-class Chicago neighborhoods, organizers said.

"We are calling this moment old friends reunited," said Lionel Rabb, the head of the Rabb Family Foundation and the founder of the Ed Paschke Art Center.

Heather Cherone says the working class neighborhoods are no strangers to fine art:

"The Lover" — weighing in at 7,500 pounds and soaring 20 feet tall — and "Sun Island" — topping out at 21 feet tall and tipping the scales at 12,000 pounds — are the first two pieces from ShanZuo and DaHuang Zhou, known for their internationally acclaimed contemporary art work, which traces its inspiration to Chinese cave paintings, to be shown in Jefferson Park.

"Over the past 30 or so years we, the Zhou Brothers and Ed Paschke, have developed a great friendship, a mutual respect and admiration for each other's work," the Zhou Brothers said in a statement. "[We] couldn't think of a better way to reflect the spirit of this than this exhibition."

Internationally acclaimed pop artist Ed Paschke was one of the first members of Chicago's art scene to welcome the Zhou Brothers to Chicago when they set up their gallery and studio in Bridgeport in 1986, and the three artists were close friends until Paschke died in 2004, Rabb said.

The artists shared an "adventurous, artistic spirit that led them on intercepting creative journeys," according to organizers of the exhibits, which will open June 19 and close Aug. 2. The exchange is part of the celebration of Paschke's 76th birthday and the first anniversary of the opening of the Ed Paschke Art Center, 5415 W. Higgins Ave. 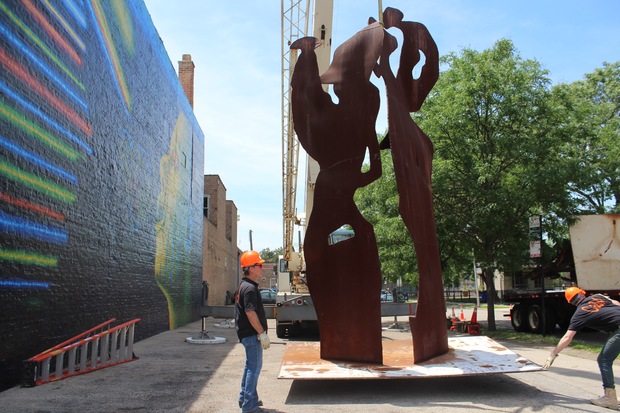 "Nothing like this has ever been done before, and the Zhou Brothers would never do anything like this for anyone but Ed," said Vesna Stelcer, chairwoman of the Ed Paschke Foundation. "The generosity and daring of this exchange is a testament to their relationship."

Paschke, who often was called Chicago's most important visual artist, rose to prominence in the late 1960s as part of a group of artists known as the Imagists.

Some of Paschke's work during the 1980s focused on manipulating the images of iconic figures such as Elvis Presley, Abraham Lincoln and Adolf Hitler. He also cited the animation of Disney and cartoons as sources of his inspiration, along with the work of his father, who was also an artist.

At the Ed Paschke Art Center, the paintings in the main gallery will be removed and the space will feature an exhibition of the Zhou Brothers' paintings from the same time period.

The opening of the Zhou Brothers Exhibit will coincide with the celebration of Paschke's 76th birthday with the Paschke in the Park art festival from 11 a.m. to 1 p.m. June 21.