Michelle Obama Tells King H.S. Grads: The South Side Made Me Who I Am

CHATHAM — First Lady Michelle Obama sent the graduating class of King College Prep seniors off to college with the help of the cast of “Scandal” at their commencement ceremony Tuesday.

Actress Kerry Washington, who plays Olivia Pope on the television show, and the rest of the cast made a surprise appearance over video to offer their own congratulations to the senior class.

Obama, born and raised on the South Side, advised the 177 seniors and the 2,500 friends and relatives gathered in the Emil and Patricia Jones Convocation Center that the graduates were not overcoming any legacy of violence on the South Side, but living up to the expectations of their community.

“Too often, we hear a skewed story about our communities: A narrative that says that a stable, hardworking family in a neighborhood like Woodlawn or Chatham or Bronzeville is somehow remarkable, that a young person who graduates from high school and goes to college is a beat-the-odds kind of hero,” Obama said.

She said there are still struggles for students on the South Side, but it is unfair to lump all of them — particularly the best and brightest from King — into a false story that all South Siders face the same struggles.

“I can’t tell you how many times people have met my mother and asked her, ‘How did you ever manage to raise kids like Michelle and Craig in a place like South Shore?’” Obama said. “And my mom looks at these folks like they’re crazy, and she says, ‘Michelle and Craig are nothing special. There are millions of Craigs and Michelles out there, and I did the same thing that all those other parents did — I loved them, I believed in them, and I didn’t take any nonsense from them.’”

Obama said she was on the South Side of Chicago to remind the nation of all of the families that are working hard to get ahead.

But Obama's remarks made clear that many seniors had already faced more hurdles and loss than many students.

Indeed, one their classmates, Hadiya Pendleton, was shot and killed in late 2013.

“It’s OK to feel the sadness and the grief that come with those losses,” Obama said. “But instead of letting those feelings defeat you, let them motivate you. Let them serve as fuel for your journey.”

Veronica Morrissette, the co-salutatorian, recounted some of what the students faced.

“We have faced many challenges during our four years here, we’ve had three principals, many of our favorite teachers have left and one of our classmates died,” she said.

Anta Njie, senior class president, said the Hadiya's slaying “was an unfortunate event, but it brought our class together.”

A commemorative bench in honor of Hadiya Pendleton was the senior class gift. 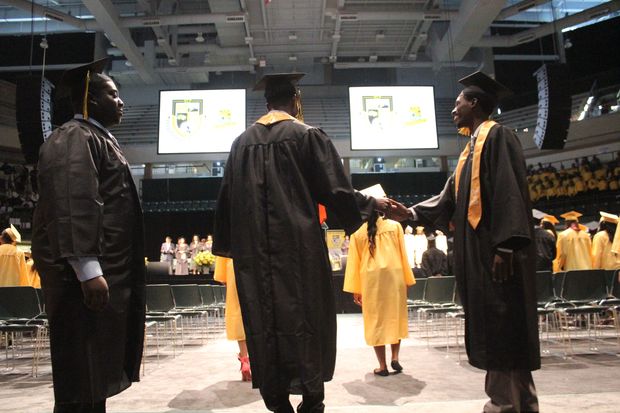 All 177 King College Prep graduates have been accepted to college. [DNAinfo/Sam Cholke]

For some students Tuesday was their second encounter with the first lady, who attended Pendleton’s funeral.

Pendleton would have joined her classmates on Tuesday and her parents were there in her place, getting a nod from the first lady in her remarks. Peter Helberg of Jostens presented them with Pendleton's graduation robe and class ring.

Students said they were moved by Obama's remarks about how the emotional scars they may have are a sign of their ability to survive.

"I liked how she was trying to merge everything together, really show how we all are one," said Madison Bowen Jr., of Jeffery Manor, who heads to Jackson State University to study economics in the fall.

Breanna Kimmmons and her parents were still aflutter from seeing the first lady for the first time. She said she will take Obama's message to believe in herself with her to Southern Illinois University.

Marcus Warren, who will attend the University of Missouri for psychology, sociology and theater, said he heard a message from Obama about the power of determination.

The competition that ultimately brought Obama in front of the King seniors urged students to apply for college, a push that may not have been necessary at King College Prep, 4445 S. Drexel Blvd., where all graduating seniors have been accepted to college.

In her speech, the first lady made clear how proud she was of the the students — and the South Side.

"I was born and raised here on the South Side — in South Shore — and I am who I am today because of this community. I know the struggles many of you face: how you walk the long way home to avoid the gangs; how you fight to concentrate on your schoolwork when there’s too much noise at home; how you keep it together when your family’s having a hard time making ends meet. But more importantly, I also know the strengths of this community.

"I know the families on the South Side — and while they may come in all different shapes and sizes, most families here are tight, bound together by the kind of love that gets stronger when it’s tested.

"I know that folks on the South Side work hard, the kind of hard where you forget about yourself and just worry about your kids: juggling two or three job; taking long bus rides to the night shift; scraping pennies together to sign those kids up for every activity you can afford — the Park District program, the Praise Dance Ministry, whatever it takes to keep them safe and on the right track. And I know that in this community, folks have a deep and powerful faith. And folks are there for each other when times get tough, because they understand that “there but for the grace of God go I.” 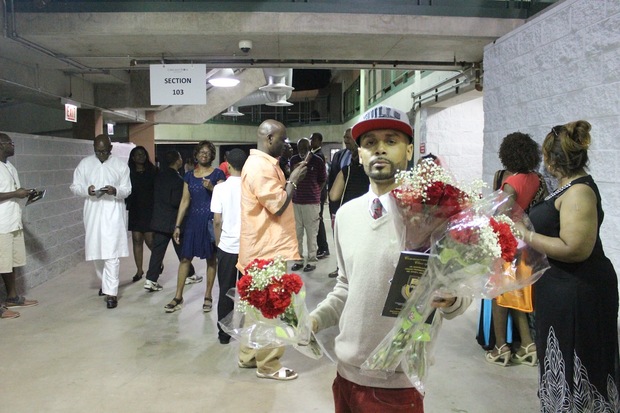 Students and parents were equally thrilled with the first lady's commencement address.