NORTH MAYFAIR — The Elston Avenue Kmart is the latest casualty in Sears Holdings Corp.'s move to shutter hundreds of stores in a bid to shore up the struggling retailer's finances.

The store, at 5033 N. Elston Ave., will remain open through mid-August, with a liquidation sale set to start June 14, according to Riefs.

The closing affects 99 employees, the majority of them part-time or hourly, Riefs said. He added that eligible staff members will receive severance and can apply for open positions at other Kmart or Sears stores.

According to Laurino, California-based supermarket chain Seafood City, which specializes in Filipino grocery items, is set to take over the space and invest $1 million in a complete remodel of the building.

Since opening its first store in San Diego in 1989, Seafood City has expanded to more than 20 locations, the majority of them in California, but also has toeholds in Washington, Hawaii and Las Vegas.

Laurino stated that additional tenants would be sought to fill new storefronts as part of the remodel.

If other Seafood City sites are any indication, it's likely the shopping center's remaining storefronts could house other Filipino companies, like Chowking, Jollibee (the largest restaurant chain in the Philippines) and PNB Remittance Centers. 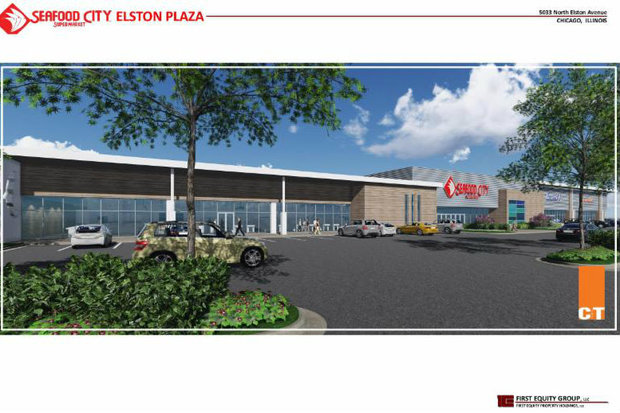 A rendering of the proposed Seafood City, which would replace Kmart at 5300 N. Elston Ave. [Provided]

"I'm sorry to see Kmart leave our community, but I'm glad the building won't remain vacant and abandoned," Laurino said in a statement.

The alderman said a community meeting with the developers would be forthcoming to share more information.

Will Fire-Damaged Abbey Pub Reopen? 'Back To The Bar' Paid A Visit